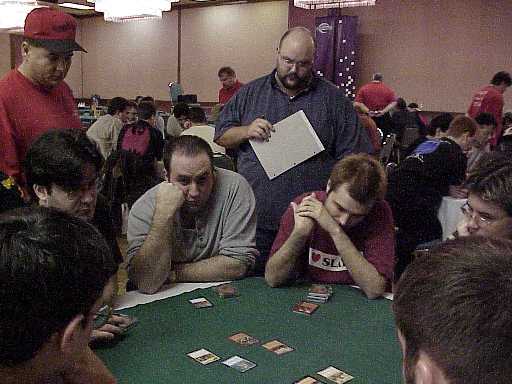 Table 8, the last table of the draft, had one of the strongest collection of drafters at Grand Prix Dallas. It included the Sideboard's own Gary Wise, Chris Pikula, Gary Krakower, Matt Urban, Bryan Hubble, Adam Katz, and then two relative unknowns - Texas native Andy Van Zandt, and from Florida, Chris Honan. After some pre-draft confusion involving correct seating and pack placement, the draft broke down with Urban drafting first, followed by Hubble, Honan, Krakower, Van Zandt, Katz, Wise, and then Pikula. Before the draft, I spoke to Gary Wise about what his draft strategy. He planned on following "the Rule" - draft blue, followed with black, and if no black then blue/white. It's funny how things can turn out "just right" for some players.

The players had thirty seconds to review the packs, and then each pick was made in five second intervals. I focused on 5 players in the draft, Wise, Pikula, Katz, Hubble and Urban. The very first pack of the draft set up players into their colors quickly. It was very strong in black and red, in fact - too strong for some players liking. After Urban's first pick of Exclude, Hubble abandoned his strategy of drafting black - because he felt that off the first pack, it would be overdrafted. So he first picked Nomadic Elf - the only playable green card in the pack. The next four players drafted red and black cards, until Gary Wise - who happily followed the Rule, and drafted a Metathran Zombie. Pikula also followed the rest of the table, drafting a Shivan Zombie and a Rogue Kavu. Gary again followed the rule, and drafted Lobotomy. As the first pack moved along, players quickly seemed to settle into their colors and drafted accordingly. There was a lot of cooperation in this draft, something you can expect from such a collection of high quality players. Bryan Hubble settled into green/white, Matt Urban was white/blue, Pikula was black/red, Wise was black/blue, Katz was red/white/green, Krakower was obviously five color (taking Harrow very early), Honan was black/red, and Van Zandt - well, no one seemed to be able to tell what Van Zandt was drafting. His first pick of the draft had been Cinder Shade. He then picked up a white flyer, then a blue card, then a black card. It turns out that the had intended to draft a combination of black, blue, and white - the Rule, as it seems. However his first pick of Cinder Shade and subsequent white picks left his neighbors confused and frustrated. However, Van Zandt's deck ended up turning out quite solid, with several Serpents to hold the ground, and many flyers to fly in for the kill with. 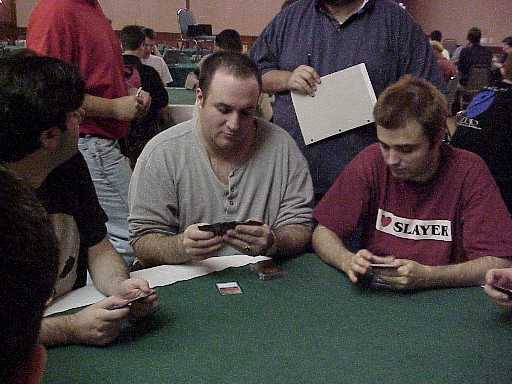 The first pack rounded out with players sticking to their colors pretty well, and rarely defensively drafting. Gary's deck picked up the bomb Tsabo's Assassin, and a couple of hits including Duskwalker and Recoil. Chris Pikula had picked up a couple of solid cards for a speedy red/black attack deck - including two Shivan Zombies, Pouncing Kavu and Skizzik. Adam Katz also picked up a Skizzik, along with some solid cards for three-color green, like Quirion Trailblazer and Tribal Flames. Katz seemed really frustrated with the first pack though, because he couldn't understand what Van Zandt was drafting and Krakower was scooping up the cards he wanted two picks away. Bryan Hubble had picked up an Armadillo Cloak and a Serpentine Kavu - the only cards of note.

Going into the second pack, the players were all looking to solidify their color choices, and pick up as many "platinum hits" as possible. Bryan picked up some very late Benalish Lancers, and used some early picks on two Obsidian Acolytes - a wise move, considering the amount of black at the table. He also picked up a Charging Troll and a Harrow - which would become much more important after the third pack. Urban's picks were your standard blue/white staples, right until his third picked Dromar, the Banisher. This solidified him into white/blue with a splash of black, and allowed him to draft cards like Agonizing Demise. Pikula spent the second pack drafting removal. He picked up two Scorching Lava, a Soul Burn and a Breath of Darigaaz - which kills every creature in his deck. Gary picked up a few more bombs, including Distorting Wake and Faerie Squadron. Katz didn't do very well in pack two, except for a seventh pick Power Armor, and a Thunderscape Master he will be able to use to pump up his creatures with. Wise seemed to be flexing his drafting muscles when he seemed to defensively draft a Halam Djinn. It turns out he was still considering splashing red in his deck, and he knew that if he passed it to Katz, it would bash his head in. The second pack finished in the style of the draft - calm and friendly. When you sit this many solid players together, and no one has issues with any of the other drafters, things go smoothly. Not good for news reporting, great for drafting.

Going into the final pack - there wasn't much confusion left about who was drafting what - all of the players had settled into their colors. Katz still seemed confused about what Van Zandt was drafting, though Van Zandt seemed to be confident in all of his picks. The third pack saw a bit of defensive drafting, when Wise picked a late Absorb that Urban thought was coming back to him on the return swing. This would have given Urban two Absorbs, and Gary picked it up instead, following his plan of drafting cards he could consider splashing. Wise also got a Fact or Fiction that Van Zandt passed - showing Andy's lack of experience in the format. Hubble's deck got much better in the third pack - picking up a Kavu Chameleon, a second Armadillo Cloak, a Canopy Surge, and to go along with his Harrow, a Treva the Renewer. He hadn't drafted his way into blue, but when you get passed a Dragon Legend, you take it, and start thinking about how to get the blue mana you need. Urban rounded his deck out with some solid cards, including Faerie Squadron, and Glimmering Angel. His deck has an air force to be reckoned with. Pikula rounded out his deck with a third Scorching Lava, and a third Pouncing Kavu. With four haste creatures in the five mana slot, his opponents would be remiss if they didn't worry about that extra three or five points of damage that could come up and surprise them. Katz picked up a second Power Armor, and he's confident his weenies will make their way across the table for some serious head bashing. 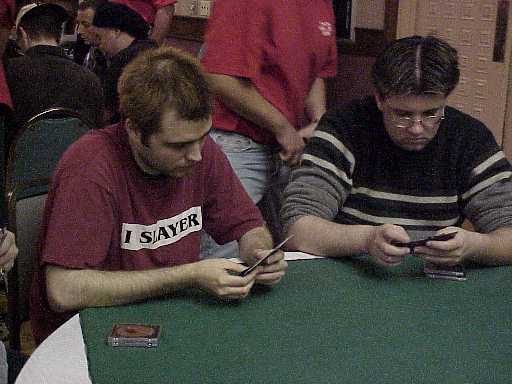 This many solid drafters at a table left everyone with solid decks. I don't think there was a consensus "best" deck for anyone. All of the players seemed to have solid cards, and no one turned out with what I would consider to have a sub-par deck. I think anyone will have trouble going 3-0 at the table, but someone will. Only time will tell.