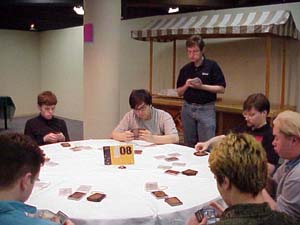 With over 600 people competing at the largest North American Grand Prix ever, only a handful of players at the 6-2 record made it into the top 64. Those players needed very strong tiebreakers, so it is no surprise that the players who made it all had three byes - resulting in the eighth table being possibly the strongest. It features the likes of Zvi Mowshowitz, Rob Dougherty, Dan Clegg, Brian Davis, and Dan O'Mahoney Schwartz.

I've chosen to cover the draft by PT Tokyo winner Zvi Mowshowitz. He is being passed to by Dan Clegg, and passing to Rob Dougherty. With three high-caliber pros in a row, it should be interesting to watch. From my conversations with Zvi over the course of last weekend at GP Gothenburg, he has not done a lot of drafting in this format. From what experience he has with it, he prefers to draft green-white or blue-white over the over-drafted black-blue-red "Good Stuff" strategy.

Zvi's first pack offered a variety of paths. The better cards included Repulse, Stormscape Apprentice, Serpentine Kavu, Soul Burn, and Wax/Wane. After some deliberation, Zvi picked a Serpentine Kavu, leaving himself open to drafting GW or GR. Dan Clegg had a much easier decision - he opened Darigaaz the Igniter, automatically sliding into a Black-Green-Red color combination. The main question remained whether black or green would become his splash color.

Zvi noted the absence of the rare from the second pack and frowned. His choices in this pack were Explosive Growth and Might Weaver. He could also draft a Probe, which is a better card but would make one of his two first picks wasted. Zvi was happy to pass the Probe to Rob Dougherty, sending a strong message about his color choice, and draft the Explosive Growth. Meanwhile, Dan Clegg picked a Duskwalker. Things seem to be working out for Zvi, as taking a double-black casting cost creature meant Clegg would be concentrating on drafting black over green. The Duskwalker pack was poor, leaving Zvi Glimmering Angel as the only viable pick.

In the following pack, Clegg drafted a Pouncing Kavu, leaving a variety of choices, but most importantly an Armadillo Cloak. Zvi, who was not very happy with the quality of his early picks, gladly snatched this enchantment.

At this point, Clegg suddenly changed directions. He drafted two Pincer Spiders, a Hunting Kavu and a Wax/Wane, entering green and thus weakening Zvi's potential deck considerably. Zvi did have decent picks in this packs, but they were not as good as the Spiders - he picked up a Nomadic Elf, a Utopia Tree, Quirion Sentinel, Wayfaring Giant and an Elfhame Sanctuary. Might Weaver returning to him in pack #10 was a pleasant surprise.

Meanwhile, Rob Dougherty was solidly put into the black-red-blue strategy, partly thanks to the Probe Zvi passed him in the third pack. Dougherty commented earlier in the weekend: "I am more of a green mage myself, but YMG's reputation for liking B/U/R works out in my favor often. People just pass me the cards in those colors." That was certainly true in this draft.

Zvi opened yet another mediocre pack, first-picking an Explosive Growth. In the second pack he had a choice of Obsidian Acolyte or Kavu Climber. With Serpentine Kavu being the only large creature in his deck so far, Zvi drafted the Climber.

The third pack offered Zvi an option to splash blue for Repulse. He drafted a Harrow instead, staying his course. Nomadic Elf was picked over Scorching Lava in pack number 4. Pack 5 finally gave Zvi an interesting card - he drafted an Elvish Champion, which would go well with multiple Nomadic Elves and a Quirion Sentinel.

Next pack had no good cards in his colors but featured a variety of excellent B/U/R picks - Urborg Drake, Soul Burn, Recoil, and Reckless Assault. Zvi could counter-draft one of these cards, or even potentially consider splashing the card he took, depending on how his deck worked out in the end. Whereas I would have grabbed Reckless Assault, Zvi picked a Recoil. 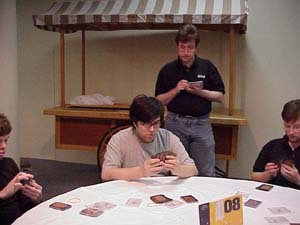 Luck simply was not with Zvi this morning, as he opened a Planeshift pack with no good picks in his own colors. I really liked the Hunted Drake he could still splash for, but Zvi took a Pollen Remedy - an excellent card, but the one you could easily pick up around pick 6-7.

Second pack was a little better. Clegg drafted a Magma Burst, passing Zvi such options as Voice of All, Samite Pilgrim, and Terminate. Zvi did not have to think very long before setting on Voice of All.

Over the next two packs Zvi drafted a pair of Thornscape Familiars, passing on various other goodies such as Hubble and Mirrorwood Treefolk.

The rest of the draft saw Zvi pick up a Sunscape Battlemage, Gaea's Might, Hobble. Aurora Griffin and a few other average cards. My only disagreement with him in this pack was not drafting any of the Steel-Leaf Paladins. Paladin is a weak card, but I felt that Zvi's deck, devoid of almost any other fat, needed a pair. Fortunately for Zvi, he ended up getting one very late (14th pick). That Paladin made the cut into his deck.

Predictions: Zvi's deck is most likely to go 1-2 in this draft. He might be able to pull out a 2-1 record, though it will take some work. I would be surprised to see him go either 3-0 or 0-3.