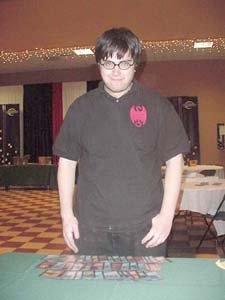 Everyone in pod three had 19 points and as they sat down I settled in behind Zvi Mowshowitz to follow his draft. Jim Pepe would be opening first and Zvi was sitting on the wheel.

Mowshowitz sat down prepared to draft U/R if necessary but hoped to avoid it. With TOGIT team members Gerard Fabiano, Patrick Sullivan, and Jon Sonne forming a flying wedge and Mowshowitz picking last he was going to have to take what the table gave him.

What they gave him was the shaft.

Things started out innocently enough as Pepe opened and picked a Contested Cliffs. Miller took a Gustcloak and never veered from White for the rest of the draft. Vizzacco showed a preference for black with an Anurid Murkdiver. TOGIT took Gourna, Glory Seeker, and Symbiotic Elf in that order. Rodemann took a Wellwisher and Mowshowitz shrugged and took a Graxiplon and a Lay Waste.

Mowshowitz took Ixidor, Reality Sculptor out of the second pack and Charging Slateback to go with it. Everyone else followed through on the first picks with the TOGIT gang taking Pinpoint Avalanche, Glory Seeker, and Skirk Commando.

Mowshowitz was the lone blue drafter until the third pack when a couple of players realized that there were not going to be enough black and red cards to go around. Mowshowitz took a Riptide Entrancer. Miller looked to make a move into U/W with a Mistform Wall. It wasn't clear if Pepe was also thinking about blue or just shafting Mowshowitz when he took a Riptide Biologist. It would become clearer later on.

The TOGIT corner just kept rumbling along with Cruel Revival, Daru Lancer, and Krosan Tusker. Mowshowitz had to content himself with a Choking Tethers. He left a Nosy Goblin for Pepe in an effort to be friendly and got a Spitfire Handler on the way back.

This was the first pack that TOGIT did not get three in a row and Sully took another Lancer while Sonne snapped up a Sparksmith. Mowshowitz took a Sage Aven over a Supreme Inquisitor not really expecting the blue rare to make it back to him. It almost did but Pepe took it –maybe thinking about switching to blue behind Mowshowitz.

There was nothing for Mowshowitz in this pack and he took another Sage Aven. Miller looked to be in blue with a Meddle. U/W looks good on paper but it has virtually no way to deal with a Wellwisher or a Sparksmith. I thought he should have fought for black or red and he would only weaken both his and Zvi's chances by going into blue.

Mowshowitz took another Choking Tethers over a Charging Slateback and a Cruel Revival and Miller took the banishing.

Mowshowitz opened a pack and was desperately hoping for a Lavamanacer's Skills or any red spot removal but only found Charging Slateback. He had another chance to open well but the closest thing to a removal spell was Skirk Commando. It may be that he should have taken that but instead he took a Mistform Dreamer. Miller got a Mistform Stalker on the wheel.

Things were starting to look pretty grim for Mowshowitz with Miller in blue and there being little to no chance of a red spell finding its way into the meager pile of playables in front of him. He wheeled a Rummaging Wizard and a Screaming Seahawk but his body language said he wasn't happy.

Mowshowitz became more animated when he landed a sixth pick Lightning Rift and another Screaming Seahawk on the way back. Meanwhile Sullivan picked up another in a long line of Daru Lancers and Fabiano picked up his umpteenth Wretched Anurid.

Miller took a Choking Tethers away form Mowshowitz this pack leaving a Complicate and an Airdrop Condor for Zvi to choose from. He took the counterspell rather than trying to bounce it with no blue players to his right and there was only a Trickery Charm on the way back.

Mowshowitz watched a Mistform Shrieker make its way into Miller's pile and he took another Tethers with an unlikely to make the cut Annex on the way back. He took a Skirk Commando out of the next pack and Fabiano took a Choking Tethers to punish him for it.

Miller took a Graxiplon and Mowshowitz got to choose between Erratic Explosion and Skirk Commando—he took the Explosion. There was only a Slateback he could take in the next pack and Sullivan took a Mage's Guile away from him on the way back.

The packs were going back the other way now and Mowshowitz wheeled a Nosy Goblin and yet another Choking Tethers. His cycling was approaching critical mass—if he had any chance at all it would rest on his Lightning Rift. There was literally no pick for Mowshowitz and he rare drafted a Flooded Strand. 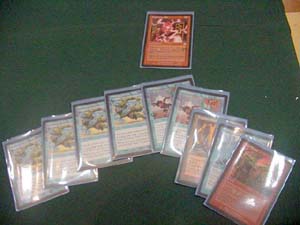 It was all about cycling cards at this point and Mowshowitz took another Tethers and a Forgotten Cave. His next pack gave him Essence Fracture and Mistform Dreamer. He was clearly frustrated by how dependant his deck was on the Rift with not other red removal spells within grabbing range. He could only look longingly across the table as Fabiano pulled Solar Blast after Solar Blast.

As the packs dwindled down to a precious few Mowshowitz once again found a Slateback where he hoped to find removal. He found another Mistform Dreamer and looked like he was going to get a Slipstream Eel on the way back when Pepe took it over an Invigorating Boon. The onlookers all winced in empathy with Mowshowitz. There was literally nothing for him in the Penultimate pack and found a fourth Dreamer in the final one.

We sat down as he registered he deck and he had 31 playable cards—nine of which were cyclers.

Zvi: "If I get a turn 2 Lightning Rift I have the best deck at the table. If I don't... I have a mediocre deck that can win. I have FOUR each of Choking Tethers and Mistform Dreamers. I could win."