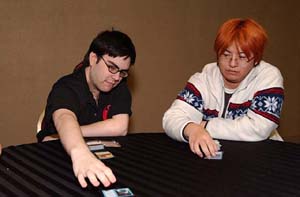 Ah, Rochester Draft. Some claim it's the most skill testing Magic format around, while other complain how the political maneuvers around the draft table sometimes make it impossible to get a good deck.

I talked to Zvi Mowshowitz about this subject several times the day before the Pro Tour began. Zvi got knocked out of the Masters Gateway in round two so he joined the horde of pros who were practicing their Rochester draft skills. Fresh off his Grand Prix win two weeks ago in New Orleans, Zvi started out complaining about how much he dislikes Rochester Draft and how the packs (not your decisions) decide everything.

But then a funny thing happened over the course of Thursday afternoon ... he noticed that everyone kept passing the white cards further down the line. Zvi agreed with the common wisdom that red is the best color and that most decks need to have some removal in them to deal with Sparksmith and thus almost every deck needs at least a touch of red or black. However, the other part of the ever-evolving common wisdom on Thursday was to avoid white like the plague. Red-Blue, Red-Green, and Black-Green were the most popular draft archetypes coming into the event and Black-blue and Black-red were also deemed playable. But none of those five desired decktypes includes any white. So white cards just kept getting passed.

When I talked to Zvi later on Thursday he had his plan: he would be the guy who would step up and draft the white cards. The white cards themselves are decent in Onslaught, according to most players, and Zvi went so far as to claim they are good enough to support a full three drafters. If the average table was only going to have 2 white drafters then he wanted to be one of them and he felt confident he'd be able to win even without running one of the desired archetypes.

The real test started on Friday and when I was looking for a draft to cover before round 1 I saw that Zvi would be drafting next to Jin Okamoto so that seemed like an interesting option. Okamoto is the consensus best Japanese player and the Japanese have been slowly but surely gaining respect in the worldwide magic community. In fact, it was Tsuyoshi Fujita who designed the original Sutured Ghoul deck that the Dutch (with an assist from Bob Maher) unleashed on an unsuspecting Pro Tour field back in Houston. I was curious to see if Okamoto and his Japanese brethren had any similarly innovative draft strategies. As a free bonus, the best Canadian player in the world – Gab Tsang – would be drafting on the other side of the table.

Pack 1 is always the most important one in a Rochester draft and this one contained Silent Specter, Avarax, Spitting Gourna, Pinpoint Avalanche, Akroma's Blessing, Barren Moor, Fallen Cleric, Disciple of Malice, Battlefield Medic, Chain of Vapor, Spitting Seahawk, and Wirewood Herald. Jozef Goldberg had the easy first pick of Silent Specter but then things got more interesting.

I was expecting Gab Tsang to take one of the red cards and try to stake his claim to the format's best color, but he went with the only good green card instead and took the Gourna. Boonc Jirapongtrakul took Pinpoint Avalanche and then Haibing Hu took fourth pick Barren Moor.

That meant Zvi was up. Sitting in the 5th seat he got to watch as only one red card went in the first four and no white cards. He decided that he was willing to fight his neighbor for red, but that he had to make his white statement immediately if this was going to make it. So he took Akroma's Blessing and then Jin Okamoto happily drafted Avarax. After Brian Kowal drafted a Fallen Cleric, Brady Williams took Battlefield Medic as part of his wheel and it looked like this might indeed be a two-white-mage table.

Tsang opened up pack #2 and there weren't any good green cards so he took Solar Blast. Nantuko Husk and Death March went next and then Zvi took his second Akroma's Blessing. Jin Okamoto took a Charging Slateback, Kowal took Wretched Anurid, and Williams may have ruined his entire draft by taking a 7th pick Crown of Suspicion (which he could have passed to the guy who had just opened Silent Specter last pack) and leaving Goldberg with an all-white wheel that was just too tasty to turn down: Secluded Steppe and Grassland Crusader. Williams and Goldberg spent the rest of the draft fighting each other and neither one of them backed down on either color choice. They both drafted black-white decks the whole way.

Gab Tsang watched this development happening on his right and meanwhile the two guys on Tsang's left were also fighting each other – both drafted black-green decks. Tsang knew exactly what to do and he switched into red and blue. That's probably the best deck in the format anyway and neither of his four nearest neighbors was drafting either color. Lesser players might have stuck to green after drafting a first pick Spitting Gourna, but those players would have been dragged down by neighbors who were fighting for green and would have missed an amazing opportunity. The packs never gave Tsang the amazing hookup he was hoping for as there wasn't a single Lavamancer's Skill opened at the entire table (that's the card that makes red-blue so good) and there was only one Sparksmith and it was sucked down by Brian Kowal. However, Tsang did get passed a third pick Butcher Orgg and his deck turned out pretty well all in all.

When Zvi opened up pack #5 and looked for his first pick, he just shook his head. He was probably already disappointed that there were two other white players at the table (though I think that was fine for him since none of the three people feeding him from the good direction or the two people feeding him from the right were white) and then he had to first pick a Daunting Defender. I'm not sure what Zvi was thinking, but I was recalling a conversation I had with Bob Maher on Thursday: "I just get in whatever colors aren't being drafted around me. A third of the way through the draft my decks always look awful, but then somehow it always seems to work out in the end." That'd pretty much what happened in Zvi's case. His second first pick wasn't really worthy of a first pick either (Glory Seeker) but he was getting good stuff passed to him late (like 7th pick Glory Seeker) and that's where you really make or break a Rochester deck. Then in his third pack Zvi busted a Lightning Rift that went straight into his deck (he's going to have at least 6 cycling cards too).

Jin Okamoto took Imagecrafter from Zvi's first pack and then opened up a Solar Blast for himself. Okamoto went into red-blue from the very beginning and never strayed from the path. He had a decent seat for it even after Zvi decided that red would be his other color – the color is deep enough that it's ok to fight for it. Kowal, on Okamoto's left, also dipped into red to add Goblin Sharpshooter and Sparksmith to his green deck, but the only thing that actually hurt Okamoto was the complete lack of Lavamancer's Skills at the table. Okamoto's Rorix could easily make up for that though.

The real story of this draft was that only four of the players were actually playing. Between the Goldberg – Williams fight and the Jirapongtrakul – Hu fight, the other four players have the four real decks. Goldberg did bust a Visara to go with his Silent Specter, but I still expect to see Mowshowitz, Kowal, Okamoto, and Tsang to be the ones emerging from this table with good records.