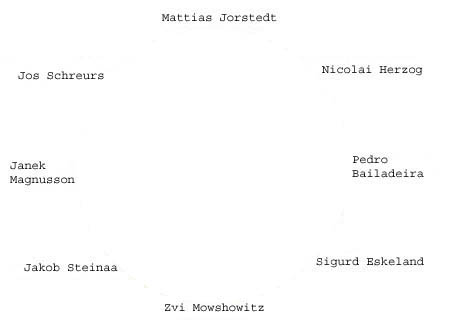 Zvi went into this draft intending to avoid the red/black cards as he expected them to be overdrafted.

As Sigurd was feeding Zvi for this set I will also cover his picks. The relevant cards from each booster will be listed for Zvi.

Hypnotic Cloud, Blazing Specter, Tower Drake, Pincer Spider, Scorching Lava, Plague Spores, Firescreamer, Might Weaver. Despite his pre-stated color preference he took the Blazing Specter as it was by far the best card in the pack. Unfortunately for him, Eskeland had the tough choice of a Benalish Heralds or an Agonizing Demise to his right and chose the Demise, falling straight into the colors of the Specter.

Benalish Heralds, Zap, Yavimaya Barbarian, Ardent Soldier, Obsidian Acolyte. Seeing that Zap was not a great second pick for his deck Zvi chose to sit on the fence for a bit and took the power card: the Benalish Heralds. Sigurd then picked a Recoil over a Kavu Runner, showing his preference for u/b over b/r (Demise is a great card in u/b as well).

Kavu Runner, Benalish Lancer, Ancient Kavu, Zap, Ruham Djinn. Choosing to go with the red cards under the suspicion that Sigurd was u/b Zvi took the Runner. Sigurd was happy to pick up a third pick Probe.

I will bold-face the picks Zvi made in the following boosters.

Pouncing Kavu. There was no other choice for him in this booster. There was no choice at all for Sigurd though, so he took an Obsidian Acolyte to give himself the possibility of splashing white.

Kavu Climber, Yavimaya Barbarian, Fertile Ground. Realizing that the black/red had started to dry up already, Mowshowitz chose to find himself a second color and chose green. Sig: Tidal Visionary.

Alloy Golem, Quirion Sentinel, Harrow. Sig: Explosive Growth - this was probably a defensive draft that would end up costing Zvi quite dearly.

The rest of the picks in this set of boosters were weak for both players. 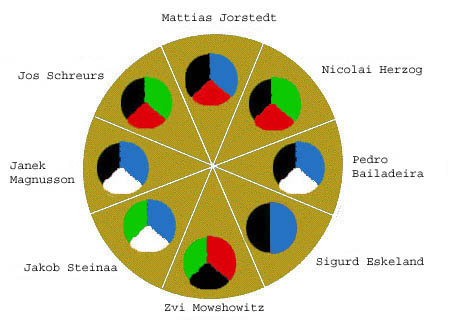 These were the colors that the players had adopted after this first set of boosters. They all remained in those colors from that point onwards

Yes, there were 7 black players in a row and Zvi was at the end of them with his first pick Blazing Specter, so he was definitely right to try to shift to heavier green and only splash for black cards. The underdrafted color on this table was white.

Despite Jacob's being in green the only pick that was damaging to Zvi in this set was a sixth pick Explosive Growth. This set of boosters was alright for Zvi and his deck was looking fairly strong at the end of it.

He took a Nomadic Elf over an Ancient Kavu.

Here he chose to take a Spite/Malice over a Kavu Aggressor, making the decision to go three-color to play his Specter.

This set was a bit brutal to Mowshowitz, given that he had two red and green picks to his right. As it happened the red and green commons in these packs were awful, leaving Zvi with the following picks:

Talking to him afterwards, Zvi thought he could win the draft table with it, but he was very frustrated about how the Planeshift packs went for him. Sigurd was looking fairly strong, having the only two-color deck on the table.