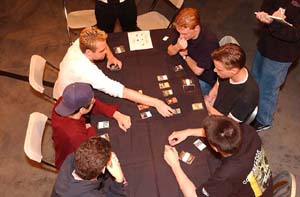 Both of these teams, from Canada and The Netherlands respectively, came into this draft at a strong 6-1.

van der Broek opened the first pack, and it was a good one. He took Puppeteer, and Weigersma took Aven Windreader. This was a bit odd, since both players went into blue right away. This left Wolfman to take the important "A" seat Whispering Shade, Rood took Aven Flock and Pollock picked up Werebear. Surprisingly, the Canadians let Psychatog and Ghastly Demise right through, and Karsten gladly took both. The next pack went as expected, with Weigersma drafting Dreamwinder, Wolfman taking a Psychatog killer in Patriarch's Desire, Rood picking up Kirtar's Desire and Pollock getting Firebolt to go green/red. The following pack was exceptional for the Canadians. Rood got Shelter, Pollock picked up Overrun, and the pack was left with cards ranging from playable to mediocre.

Pollock's pack provided a second Overrun, but he did pass a second Ghastly Demise to Karsten, while van der Broek got Bomb Squad, which threatened to be a problem card for Rood's white/blue. Right about this time is when things started to get a bit weird for Starmaker. Karsten signaled to his teammates that he was considering going green/black, splashing blue for the Psychatog. van der Broek was leaning between green, blue and red as potential colors, although Weigersma suggested that he should abandon red and just aim for blue/green. This plan was abandoned early in Torment, as van der Broek drafted Sonic Seizure and Pardic Lancer. Narcissism gave Pollock yet another bomb, and Wolfman got a Crippling Fatigue. van der Broek also got Hell-Bent Raider, seemingly going deeper into a three color deck. Karsten drafted Balshan Collaborator, providing another powerful blue card to splash.

Judgment provided Weigersma with one Prismatic Strands, which would be key against Pollock's Overruns. Rood made sure he got two Lost in Thought so that he could stop Bomb Squad, and also picked up a gift in a late Nomad Mythmaker. Weigersma drafted Wonder, and Pollock made his deck even better with Arcane Teachings. Pollock opened a pack that saw him take Grizzly Fate, Fledgling Dragon went to van der Broek, and Weigersma drafted Battle Screech. van der Broek also got a Grizzly Fate of his own in the last pack. 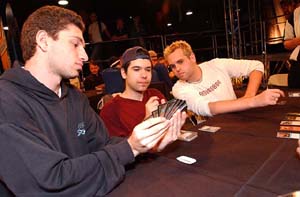 Sideboard: How do you guys feel it went?
Pollock: Very good. It went very well. We're going to win.

Sideboard: Anything specific that you were happy about?
Pollock: I opened insane bombs, and both of (Rood and Wolfman's) opponents are playing three colors. The guy in the middle on their team (van der Broek) was drafting very randomly, so it's all good.
Rood: I got really scared about Bomb Squad, but then I got two Lost in Thought, and we had an argument about Nomad Mythmaker, which is insane with Floating Shield. But, then it came back so we got really lucky there. I'm not afraid about anything in his deck except for the Bomb Squad.
Wolfman: I'm happy with the matchup. His main source of kill is the two Ghastly Demises he has, and my deck is mostly black, so it's not a big deal. His Cabal Torturers are the only problem I can see.

Sideboard: I was surprised that they opened Ghastly Demise and Psychatog, and you guys just let it go.
Pollock: Steve took Whispering Shade because that's one of the best cards in the black on black matchup.
Rood: Also, their first picks were blue, and if they took the Psychatog there's no way for all of them to play blue without splashing. So we figured if they have to splash that's fine, and we'd rather have the Whispering Shade.
Pollock: He took black to go into his normal seat. I took Werebear. Basically, we have a set plan and since the first two guys took blue cards there's no way that we can know what they're going to be playing at that point. 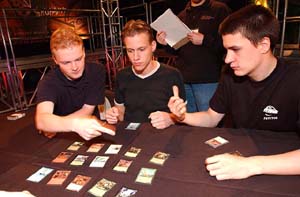 Sideboard: So you'd rather stay with the plan as far as the seating goes instead of just taking the better card.
Pollock: The majority of the time. If they're in something that will give us a big advantage to switch around, then we'll try to change our plan.

Sideboard:Psychatog is a card that I don't see passed too often.
Pollock: It's surprisingly not that good in the black mirror. It's okay...it's sort of slow.

Sideboard: Any thoughts on your matchups?
Pollock: I think we all have wonderful matchups. My opponent only got one Prismatic Strands which is a really important card, and I got one Flaring Pain. Both of their opponents will just get mana screwed.