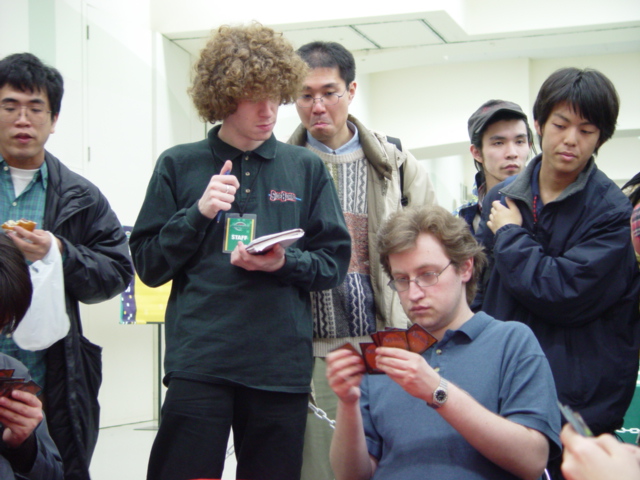 World traveller Alex Shvartsman is right at home at an Asian Grand Prix. With two titles to his name, and a string of Top 8 appearances as long as your arm, he's no stranger to excellence in the face of top-level competition. Having 3-0'd his last draft pod, Shvartsman was downright giddy. All he needed to do was win his first match, and he'd be able to draw into the Top 8. That is, providing his opponents were alright with that. He was being fed by Yusuke Sasaki and feeding Masashiro Kuroda, who coincidentally flanked Tsuyoshi Fujita during the first draft.

Shvartsman started off with Mystic Zealot over Kirtar's Desire. He was looking to go blue, but when none came, he was just as happy taking Dirty Wererat and Patriarch's Desire. Mystic Visionary came next, and it seemed like the packs were petering out, but it was only for a moment. Next he took Whispering Shade over Cabal Pit, then Embolden, Aven Flock, and Malevolent Awakening.

Ahead of him, Sasaki was drafting blue-white, but favored blue, which worked out well for Shvartsman. Kuroda was heavily into red, picking up what black slipped by. That meant Shvartsman was sharing a color on either side, and would be feeling the pinch.

In fact, it was worse than that. For the second pack, Shvartsman would be the fourth of a string of black mages. That boded particularly ill for Mike Long, who would suffer the same fate for Torment.

Shvartsman started with Ghastly Demise, but then took Crypt Creeper over Blessed Orator and Embolden. Later he said that this was too keep his costs down. He didn't to find himself entirely in the four slot. Next came Aven Flock and Auramancer, but the thinness of the pack didn't sway him to take the Springing Tiger or Syncopate therein.

Again he took Crypt Creeper over Embolden. Then he was shown Whispering Shade, Repel and Deluge, and had to pause. He decided to go for the Repel. He finished off the pack with an Embolden, a Pilgrim of Virtue, an Egg, an Auramancer and a Cephalid Coliseum.

Torment started off well for Shvartsman, with Soul Scourge followed by Cabal Torturer, Militant Monk and Mesmeric Fiend. His fifth pack contained Turbulent Dreams, which caught him off-guard, but he passed it up in favor of Spirit Flare. The next pack had another Turbulent Dreams, but also Organ Grinder and Shade's Form. Shvartsman took the creature.

He took another Spirit Flare over Unhinge, a card he calls "terrible", but was really happy to pick up a pair of Pay No Heeds, which have been very good to him lately. He also scored a late Deep Analysis and a Tainted Isle to help cast it.

During construction, Shvartsman was frank. He didn't like his deck very much, and it was significantly worse than he thought. The major flaw he saw was in his early defense. He would have to use 2/1's to stop an incoming horde. Also, he didn't have any brutal power cards. That said, his deck was still more than capable of taking the one match he needed. He hoped.