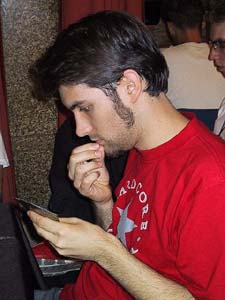 A lot of Pro Points seated themselves at table 3 for draft number 2, namely Mattias Kettil, Andrea Santin and Kamiel Cornelissen (in that particular order). The other five players at this table are all virtually unknown, however, they all proved they can play by obtaining the necessary 3-0-1 or better record. It would be interesting to see if these pros could cooperate with each other in order to dominate the table. The packs however, deemed otherwise.

Santin had a pretty interesting first pack, containing lots of good blue cards like Aven Windreader, Treetop Sentinel and Aether Burst. He took the Windreader passing Kamiel the Sentinel, which he gladly it took after first picking Cephalid Looter. Kettil started with black cards from some terrible packs but was soon busy cutting off green from the right. This terrible packs soon came to Andrea and Kamiel who were hurt for not getting good blue or green cards in this development and they all chose a different solution. Mattias dipped into red a little because of a farily late (8th) Vampiric Dragon. Andrea tried cutting off black entirely to set himself up for Torment and Kamiel picked up two Hallowed Healers before setting his mind on red cards. Looking through their Odyssey acquisations Mattias was solid in green with some splahsable black and red, Andrea was blue/black and Kamiel was a little stuck with white, blue and red cards.

Torment helped the players a little more with their decks. Kamiel got some burn spells, Andrea got some of the powerful black spells and a Deep Analysis while Mattitas gave his deck some more body with green Madness creatures and black goodies.

Then the last set was upon them. Judgment gave the tools to round out their decks. Kettil got to fill in the holes in two and three slot with multiple Ironshell Beetles and Nullmage Advocates. Santin had more problems as Judgment is known for not being kind to black drafters (no pun inteded). The blue cards didn't help him either, as he only got 2 Lost in Thoughts. He really likes the card though:"It helps in a lot of archetypes; in white/blue it gets rid of problem creatures like Cabal Torturer; in blue/green there just isn't any removal and in blue/black it keeps the fast green creatures at bay." Kamiel Cornelissen's deck just got a little better through some Battlewise Avens and some cantrips.

In the end these three pros are in for a rough session. When I went to them during deckbuilding Santin was deciding what he should splash for, ahving already cards like Filthy Cur and Boneyard Slasher in his main deck. Kamiel's 3-colour special never really looked like anything more than just a bunch of cards and both players weren't really optimistic about their chances. Mattias Kettil's deck looked a lot better, but didn't really shine either. Apparently the packs imposed some weird signals which in the end hurt Cornelissen and Santin pretty much. These players should be happy if one of them could go 2-1 at this table.