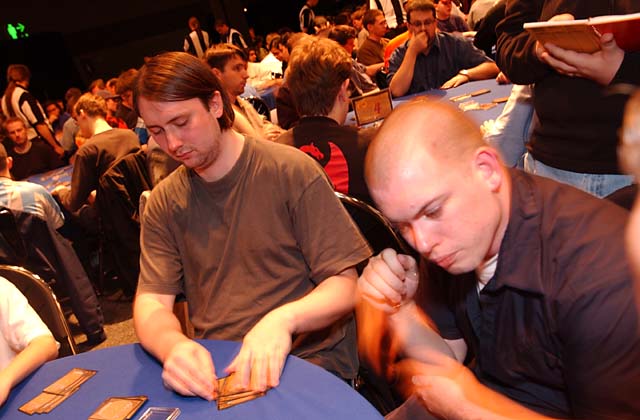 Anton Jonsson and John Larkin had to be thinking about the national team competition when they sat down for the second draft on Thursday. Their 7-2 records earned them a seat on table 2, but even more important they are each national champions and their countries sit first and second in the team competition. Larkin's Irish squad is a slim one point against of Jonsson's Swedes. Jonsson has been on quite a tear this season, with two Top 8's and counting for the rising star of Team Punisher.

Jonsson's draft wasn't terribly interesting. He first picked a Shadowmage Infiltrator and his neighbors seemed perfectly happy to have him in blue-black. His second pack was a Cephalid Looter (with a common missing he had to think that Cole Swannack had taken a Wild Mongrel, which was indeed true). Then his third pick was a Ghastly Demise. The only really interesting decision Jonsson had to make was I his very first pack of Torment: Faceless Butcher or Nantuko Shade? It was a nice decision to have to make ... he took the Butcher.

Larkin took Ghastly Demise first and it looked like the two of them might wind up fighting, but Larkin's second pick was a Firebolt and there turned out to be plenty of black for he and Jonsson to share. Both players wound up with great decks going into Judgment, but all they got passed in Judgment was lots and lots of green cards. Apparently, after first picking that Mongrel, Swannack got passed an Iridescent Angel and took the hint, switching into white and winding up with an amazing white deck. All the decks I saw had flaws and the outcome of the next thee rounds looks like it will be determined by raw play-skill. Whoever wins this table is in great shape to make Top 8 and even a 2-1 mark could leave any of these guys in good shape to make a run.