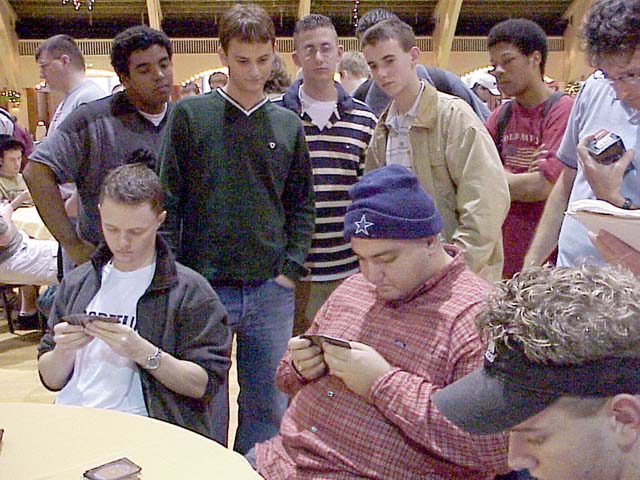 At the top of the standings, local hero Antonino DeRosa sat completely undefeated through 10 rounds of play. With a full 30 match points, he needed only a draw to be guaranteed a spot in the top 8. With such flawless play over the past two days of competition, I decided to sit down with him after his second Booster draft and ask him a few questions to try to understand his success.

Ben: (Extends hand) Ben Bleiweiss, mind if I ask you a few questions about your deck?
Antonino: (Shakes my hand) Nice to meet you, by all means, please.

B: How do you feel your deck is this time around?
A: Really good. Green was underdrafted at the table, and there was always a good green card in my packs. I wanted to draft green and red, but there were so many that I couldn't cut them both off, so I chose green.

B: I noticed that. For your fourth pick, you took the Roar (of the Wurm) over the Firebolt.
A: Passing the Roar would have sent the wrong signals. The guy on my left would have gotten the Roar what, 5th pick? That means that five people to his left either aren't drafting green, or took Wild Mongrel. Even though Firebolt is better for this color combination (Green/Red), I wanted to make sure I got the green in this draft.

B: The pick before that, the last card in the pack was a Wild Mongrel. When you were looking through it you didn't seem too happy, but your face immediately brightened up when you saw the Mongrel.
A: I was really happy with that. I think that the Mongrel comes in the same pack as (Mystic) Zealot and (Cephalid) Looter. I'm not 100% sure, but that's the common run I've seen a lot. I know that Kibler loves playing white and he was two seats to my right, so I figured that Kibler took the Zealot, and the guy directly to my right took the Looter. All the uncommons and rares were definitely still in the pack.

B: Let's move ahead a little bit. As quickly as you took the Mongrel, it took you the longest to choose between Muscle Burst or Krosan Avenger as your 6th pick (pack 1). What was going through your head at the time?
A: If I'd known then what I'd end up with, I definitely would have taken the Muscle Burst. I love drafting Red/Green, but I find that it ends up heavy in four drops—things like Springing Tiger, Elephant Ambush the (Krosan) Archer and the (Nantuko) Disciple. Red/Green decks can be lacking in two and three drops, so I wanted to take the Avenger to make sure I had enough three drops. Then I got another the next pack.
B: And the pack afterwards too.
A: Yeah (laughs).

(Antonino then finished laying out his cards by casting cost. He puts the spells into a separate pile from his creatures, and points to his Narcissism).

A: This (the Narcissism) might have been the wrong pick. That'd be inexperience with the format, I haven't drafted much with Torment yet. But Red/Green needs help getting to threshold, and the (Krosan) Avengers are a million times better with threshold.
B: I've gotten to play a lot of Magic Online, and every time Narcissism stays on the table, it's won the game.
A: Yeah, I'm going to try it and see how it works out, but I wish that first pack (of Torment) didn't have so many good green cards at once.

B: I noticed that you could have taken the Nantuko Cultivator, and I know you had him in your last deck. How did he work out for you then?
A: It's just great, even if you have only one land to pitch. Then he's a 3/3 which is nothing to sneeze and plus you got to cycle a land. Late game he's amazing though. Red/Green ends up holding all their late game lands in their hand, so he can easily end up being a 7/7 or 8/8 plus drawing you a new hand full of cards. Last deck he fit in better, since I had eight 2 (casting-cost) drops. One thing I preach, maybe a little too much, is mana curve. I'll always take a less good card over a card which won't fit my mana curve.

B: Another thing I see when I look at your deck is that you have a ton of cards with the punisher mechanic—like Blazing Salvo and the (Longhorn) Firebeast, plus the Skullscorch in your sideboard. What do you think about those?
A: Well, I'll never play the Skullscorch, but the others are all right. Individually they really suck, but the more you have the better they are. At a certain point your opponent just has to stop paying life to prevent them, because they are so low. Plus a 3 mana Lava Axe isn't bad at all, and I don't think they'll have a choice for long since my deck is so fast anyway.

B: Were you disappointed that Red and Green seemed to dry up so quickly in Torment?
A: I think it dried up too fast. One of the guys to my right had to have realized that red was underdrafted, so he dipped into it. Red is really deep in Torment. You don't have a lot of first picks, but there's a lot of solid cards that go late, like Sonic Seizure, that are solid removal. Someone must have decided to start drafting it. Plus, I got sort of shafted on the commons. Judging from the amount of green that came around in the first pack, green should have made it to me, but there were no good commons, like (Basking) Rootwalla. There weren't any Sonic Seizures, and only one Fiery Temper.

B: At one point in your last pack (Pick 9) you chose to take a Flash of Defiance over an Acorn Harvest. Why'd you make that pick?
A: I'm not a fan of the Harvest at all. Against White/Blue and White/Green, you need the Flash to get through all the high toughness creatures they have, like Angelic Wall and Teroh's Faithful. I already had a good 17 cards going into the last pack, so I could give up a pick or two to get a quality sideboard card. Plus I wasn't going to play the Harvest anyway, even if I got it.

B: What record do you think you'll end up with this draft?
A: I'm hoping for 3-0 of course, I want to be undefeated. But I also have some friends at the table, and I might concede in order to get them into the top 8. I only need a draw to get into the top 8 myself. And I believe in good karma, what comes around goes around. If someone wants to draw with me to make the top 8, it's good karma if I accept the draw and get us both in. I'm an older player, and one thing I don't like is that newer players bring themselves such bad karma. They talk so much trash, it's just jinxing themselves. I'll walk by a match, and two turns into the Game 1 of them will turn to a friend and say "Looks like I've already won this game" based on their opening hands! If you're going to win, just play the game and win. There's no reason to show off about it.

B: Since you've had a great deal of experience with Red/Green in Odyssey block, I have to ask: What kind of deck gives yours the biggest problem?
A: White/Green with Teroh's Faithful and damage prevention can give it a lot of trouble. A lot of times this deck will have problems with Pilgrim of Justice, but this time I have mostly green creatures, so he's not as bad. I guess high toughness creatures in general would give this deck a problem, since I don't have many early tricks, just one Muscle Burst.

B: You seem to have a pretty good sideboard as well. Which cards can you envision having to side in over the course of the match?
A: If I play someone low on bounce and removal, I'll bring the (Seton's) Desire right in. I love playing it, but this deck has a lack of one and two drops. Since my curve pretty much starts at three, it's not as good as usual, but I'm still going to side it in a bit. Also, Flash of Defiance and Devastating Dreams might come in depending on what I'm playing, and possibly Volcanic Spray. I have three Avengers, so it's not as good as it might have been.

B: Well Antonino, thanks very much for your time! Do you have any last thoughts you'd like to share with our readers back at home?
A: If you believe in yourself, and you keep improving your game, you'll end up having success. Don't worry about what other think or say about you, just be yourself, and eventually everything will fall into place.

All significant cards are listed for each pack. Antonino's pick is listed in BOLD.