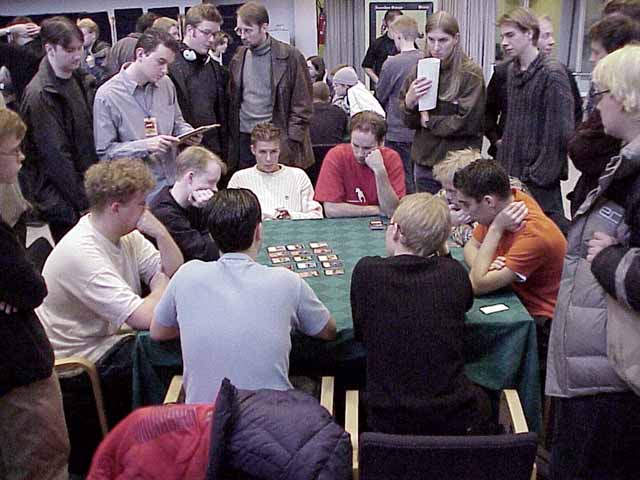 The top table featured a good mixture of well-known and relatively unknown players. It was everything Ryan Fuller and Noah Boeken could have hoped for coming into this event as these two close friends found themselves sitting next to each other in the last draft of the day. Cooperating with the players sitting next to you is a typical essential to a good Rochester draft and with Ryan and Noah splitting whatever money they may end up winning these two players were obviously not even considering drafting against each other. Arto Hiltunen was sitting on Noah's right and these three together made up most infamous players on the table.

Before the draft had even started, as the players chatted to each other, Arto made his intention to draft black-red very clear by stating it directly to Noah. Arto held true on this promise as sitting in seat number five his first pick of the draft was a Viashino Grappler. Noah respected this and took a Vodalian Serpent, leaving a Kavu Aggressor for Ryan.

The players settled into their colours at an early stage in this draft. Arto followed his Grappler with Ancient Kavu, Reckless Spite and Plague Spores firmly entrenching himself in black-red. Noah meanwhile picked up a Rainbow Crow, a Tower Drake, a Stormscape Apprentice and a Roham Djinn to confirm himself as the blue-white player. Ryan had the rougher end of the stick sitting in seat seven, but was still able to solidify his selection with some solid creatures, an Agonising Demise and one each of the Black and Red Djinns.

Tomi Walamies sitting to Ryan's left initially started with blue but once the boosters moved around the table past Arto the red and black cards became too good for him to ignore and he switched into those colours which did himself just as much harm as it did to Ryan.

Through-out the second set of boosters Ryan had to suffer a little as he had a couple of cards taken away from him. There was plenty to go around however, and Ryan was able to draft a lot of cards that were good for him including a Kavu Monarch which is excellent in his deck containing half a dozen or more Kavu.

Things went much better for Noah however as he had no-one next to him drafting his colours. Both Ryan and Arto stayed true to their initial picks and Noah was able to pick up a lot of great picks very late including a wheel which contained Wings of Hope and Riptide Crab, both probably easy main-deck cards.

Arto's deck didn't really pick up until the last round of boosters. Both the boosters he'd opened previously had contained nothing significant, but with the player on his right not drafting black or red he was able to pick up Smouldering Tar, Exotic Curse, Agonising Demise and Breath of Darighaz giving him some excellent and very flexible removal.

Noah's deck also improved significantly at this stage as he had an Absorb come round very late, and was also able to pick up a Spinal Embrace which he may well end up splashing black for. In addition to this Arto kindly opened up a Sunscape Apprentice which he duly passed to Noah thus completing Noah's excellent set of cards.

In conclusion, both Ryan and Arto are black-red and have very solid decks. Arto's removal is definitely superior although Ryan has the more aggressive creature base. Noah meanwhile is white-blue and has an excellent deck. He may well end up splashing black for Probe's kicker, Recoil and the Spinal Embrace as these only improve his already powerful deck. It's highly likely that one, two or perhaps even all three of these players will find themselves with slots in the Top 8.