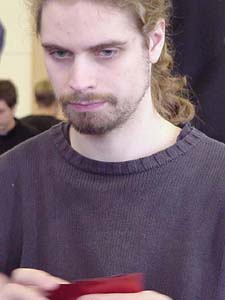 Needing to go 2-1 or better to have a shot at Top 8, the second draft of Grand Prix Biarritz was a crucial one for Ben Ronaldson, member of Team Godzilla and originator of Team Hampton Court Palace. After going 7-0-1 on Day 1, Ben only managed a 1-2 result in the first draft, and was looking for a better result this time around.

Sitting in seat four, considered by most to be the best position in Rochester, Ben knew his first pick would likely be determined by those picking in front of him. Spain's Xavier Curto started things off with Flame Burst before Frenchman Julien Colomb made his intentions in the draft very clear by taking Diligent Farmhand over some superior cards, declaring himself a green mage. Steve Queroub, who Ben would face in the first round (they were the only 8-2-1's at the table) then took Afflict, leaving Ben Aven Fisher, a good start for the Englishman, who drafts blue more often than not. Olivier Ruel followed Ronaldson's pick with Aven Cloudchaser, Carlos Barrado took Scrivener, Pro Tour New Orleans finisher Anton Jonsson took Aven Archer and Guillaume Matignon of France took two black cards.

Unfortunately for Ben, things didn't stay harmonious for long. Colomb opened his booster and, despite his green first pick, chose Ghastly Demise over Nantuko Mentor. This sent Queroub, whose first pick was black, into blue when he took Chamber of Manipulation, and with Ronaldson slightly exasperated, he tried to stay clear of the Frenchman, this time taking the Mentor in the hopes of avoiding those drafters around him.

Queroub didn't particularly care about avoiding the colors of the man behind him. Steve opened Wild Mongrel and took it over Hallowed Healer, which would seem to be perfect in the color distribution scheme that was forming, but Ben, potentially too conscious of Olivier Ruel drafting white behind him, took Ember Beast. Then in his pack, he opened Wild Mongrel and Cephalid Looter and was essentially forced to choose blue or green, knowing full well the player in front of him could well be drafting both.

Ronaldson chose the Looter, a pick I disagreed with. With Colomb obviously green, it seemed like Ben would have a much better chance of scaring Queroub out of green then blue. Ben's argument was that he didn't feel the Chamber was a good enough card to lock the Frenchman into blue, but the counter argument there is that if he took it third, he probably valued it more than Ronaldson would. Ben's pick signaled Olivier, telling him he could go green as Ronaldson wouldn't be doing so, so the Frenchman first picked Werebear in the fifth pack. Ben eventually got himself another Aven Fisher and by the end of the first pack was looking like he'd be red-blue, a very unpopular color combination due to poor synergy, weak creature base and an inability to handle large green creatures.

The second pack continued to engrave Ben's color choices. First he got Anarchist, then Scrivener, but he given another tough choice in pack eleven. With Carlos Barrado taking Wild Mongrel for his green-blue deck and Olivier taking Hallowed Healer, Ben had to decide between a mediocre red card and Roar of the Wurm, a powerful, easy to cast green card. Looking at a weak deck thus far, Ben decided that he needed the bomb in order to win, and made what seemed like a good choice, sacrificing his mana base for power. He then got Puppeteer in a pack that sent Olivier into black with Stalking Bloodsucker, before opening and choosing Bomb Squad.

Ben eventually opened a Cephalid Looter and got himself two more Ember Beasts, but in the end, he felt like the deck would struggle to meet his pre-draft goals. Fortunately for him though, Magic is a funny game, so only time will tell if his prognostications will come true.