Table 1 was full of professional players, all in contention for the Top 8. No one was out of the running and no one was in for sure. On one side of the table sat Peter Leiher, with David Humpherys to his left, and Chris Benafel to Dave's left. Trevor Blackwell was the fourth in the row, to the left of Chris Benafel. Rarely do you see a table this good except in the upper levels of the Pro Tour, with Matt Linde, Matt Vienneau, Mark Lepine, and Ben Romig rounding things out. 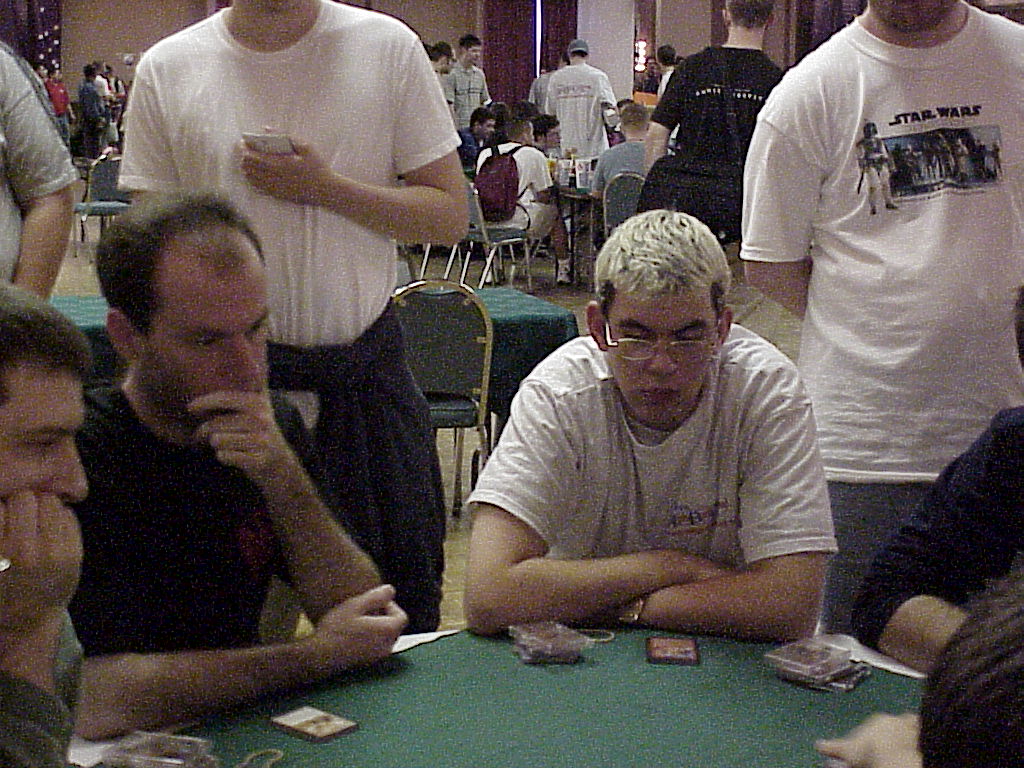 Things were rocky from the start, with Peter Leiher drafting a Dustwalker immediately after Ben Romig drafted a Goham Djinn on his right. David Humpherys followed that up with a Canopy Surge and Chris Benafel picked a Glimmering Angel and things seemed to be going more smoothly until Trevor Blackwell picked a black card and then drafted a Wings of Hope on the way back, denying Chris Benafel a good blue/white card. In the next pack, Peter Leiher drafted a Tribal Flames, signaling to the other players that he was drafting black/red, while David Humpherys and Chris Benafel continued drafting cards in their primary colors, green and white respectively. More trouble was stirred up in the next pack as Peter Leiher first picked an Exclude and David Humpherys also went into blue taking a Fact or Fiction. All the time, Chris Benafel continued to draft white cards, only picking up one card of another color, Ancient Kavu in the fourth pack. In the very next pack, however, Benafel took a first pick Charging Troll, Peter Leiher hate drafted a Harrow, and David Humpherys picked up an Obsidian Acolyte and a Dismantling Blow. 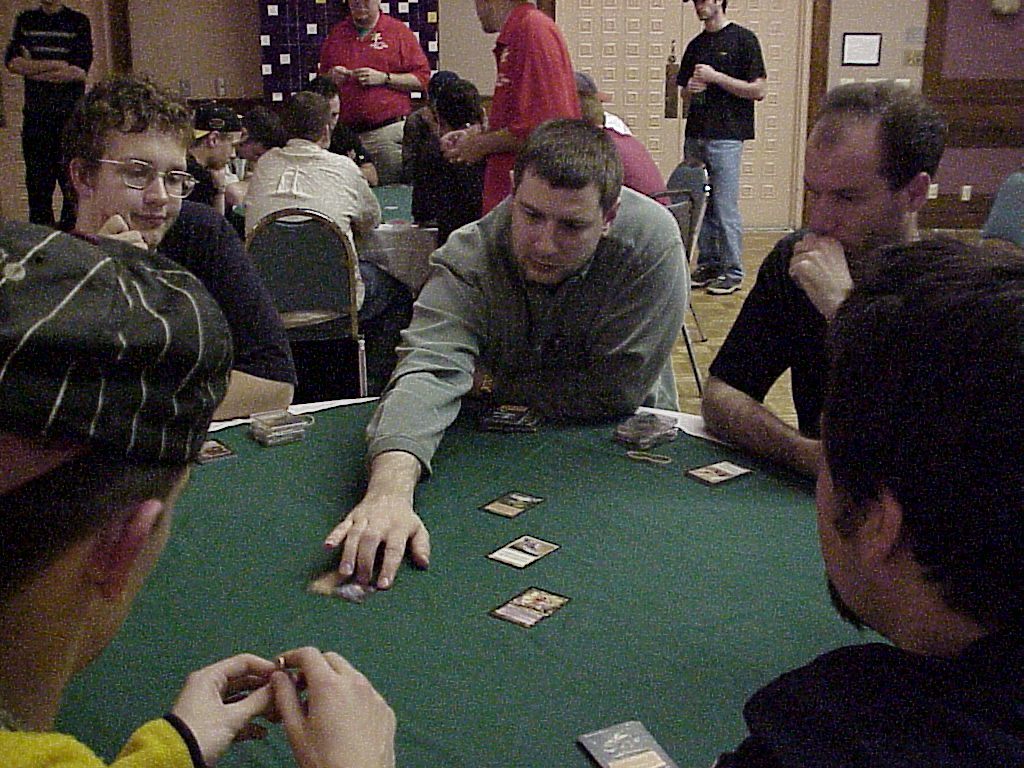 What was going on here? Peter Leiher was now drafting Black/Blue/Red, fighting for Black and Blue with Ben Romig on his right and fighting for Blue with David Humpherys on his left. David Humpherys was drafting Green/White/Blue, fighting for Green and White with Chris Benafel on his left and Blue with Peter Leiher, while Benafel was drafting Red/Green/White. All this time, however, Trevor Blackwell is drafting Black/Blue uncontested to the left of Chris Benafel, largely because he took that Wings of Hope away from Benafel in the first pack, discouraging Chris from going into Blue. And not only were Benafel, Humpherys, and Leiher fighting with each other over colors, Peter Leiher was additionally hate drafting Humpherys when there was nothing else for him to take. Over the course of the draft, Peter Leiher ended up taking not only that Harrow, but also a Llanowar Knight, a Treefolk Healer, and a Quirion Elf from Humpherys. 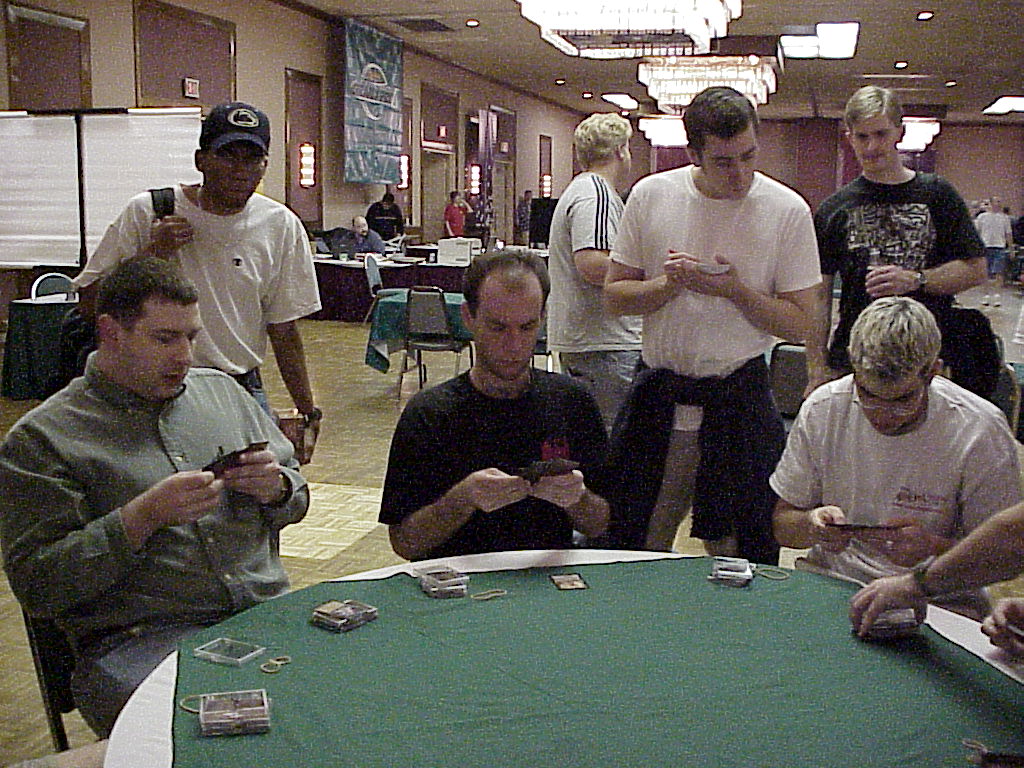 The fighting continued throughout the entire draft and things were almost as messy on the other side of the table. The only players in the draft who didn't end up fighting with their neighbors were Trevor Blackwell drafting Black/Blue and Matt Linde drafting Green/White to his right. Despite the fighting, all three players were able to draft powerful cards, largely due to the fact that they were willing to draft three or more colors. Peter Leiher ended up with two Soul Burns, an Agonizing Demise, a Shivan Emissary, and a Crypt Angel, although his selection of creatures turned out to be subpar. David Humpherys, while lacking the powerful removal of some of the other players had an excellent creature base, including two Faerie Squadrons, two Serpentine Kavus, and an Angel of Mercy in the five casting cost spot. Similarly, Chris Benafel, in addition to his Charging Troll, was able to pick up powerful cards like Fires of Yavimaya, Thunderscape Master, and Ruham Djinn. Its hard to say for sure whether these cards would be a part of a successful deck or a just be part of a grand failure. Any of them had the skills to win and make the top 8, but could also be victims of the mana problems inherent with three color decks. Only time would tell.