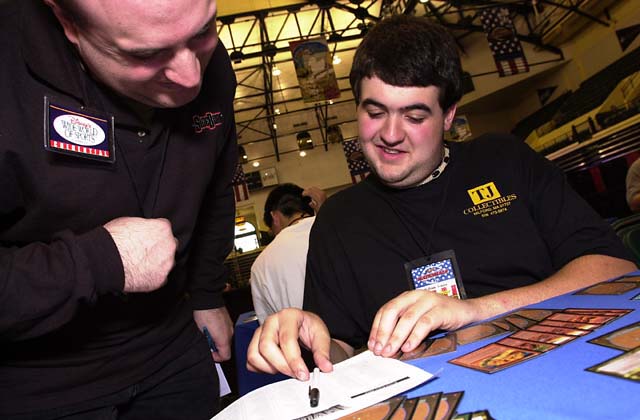 Some players enter a draft with the attitude that whatever comes to them should be drafted. Some come in thinking "draft what the guys around me aren't". Some think that its best to force colors: Billy Jensen just takes everything.

Coming into Nationals, "Baby Huey", possibly the best drafter in the world, knew what his game plan was: draft five colors. Billy had drafted the five color archetype more than any other and was convinced it was the way to go.

Before the draft, I asked Billy to tell me which card and which common card were the ones he'd most like to open from his seat one, usually a bad placement but actually a preferred location for the seventeen year old. His answers were Ghitu Fire and Harrow, a choice that solidly illustrates his bias in the format.

Sitting to the left of Rob Liszka and the right of long time IRC companion Jason "T2K" Opalka, Huey opened the first pack of the draft and found that as far as a green deck went, his only choice was Quirion Sentinel. Deciding this card was not strong enough to make his statement with, Bill chose the strongest card in the pack, Tribal Flames, which happens to be particularly effective in the five-color strategy.

With Opalka having taken Duskwalker in pack one, when he opened Reckless Spite, it solidified his status as a black player. With Liszka having taken Mourning and Salt Marsh with his first pack picks, it was obvious he was looking to go blue-black, and he verified this with his seventh pick Tidal Visionary. This opened the door wide open for Huey, who leapt at the opportunity to take Plague Spores and Zap 8th and 9th out of a very solid pack.

With the third pack, Huey seemed to awaken to the fact that Liszka, drafting in front of him, may not know his card values very well. Faced with the possibility of a 6th pick Trench Wurm, the blue-black Liszka instead selected a Nightscape Apprentice, leaving Huey shrugging "if I have to" as he chose the 3/3. By this point, an interesting pattern to the packs was noticeable. Aside fro the first pack Sentinel and a Darigaaz selected by fellow five-color drafter Andrew Johnson in the third pack, there was no playable green on the table. This meant that everyone else at the table was establishing themselves in other colors, meaning Huey should have been able to clean up on green. Unfortunately, not everything is fair in love and Magic.

As the packs continued to open, Huey got more than his share of powerful cards, but very few were Green. There was a 5th pick Thornscape Apprentice in the next pack, but there just wasn't enough green to go around, especially when Steven Shears in seat four and Benjamin Ainsworth in seat seven moved into the color. Even more importantly, amongst the Green cards that were missing were Harrow, Quirion Elf and Fertile Ground, the cards that make the five color Green deck possible, and when the sixteen Invasion packs had been opened, there still wasn't one of them in any of the decks, let alone Billy's.

With powerful cards like Zanam Djinn, three Tribal Flames, Benalish Trapper, Rushing River and two Excludes, Billy's deck ended up one of the most powerful at a table with a decidedly weak card pool. However, the fact he had to celebrate the opening of the one Primal Growth and the drafting of Slimy Kavu and Kavu Recluse as ways of stabilizing his mana suggest that he'll have mana problems throughout the next three rounds.