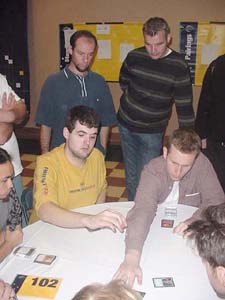 Round 11 saw these two Pro Tour giants duke it out, and in a very tight third game, Maher managed the victory by building up removal in his hand as Jensen telegraphed his Wave of Indifference by going to Maher's head with an Erratic Explosion relatively early in the game.

In this draft, however, the friends got to work together, sitting next to each other, with Jensen feeding Maher. Maher, in seat 1 opened first, and was faced with an Infest/Pinpoint Avalanche pick. Reading the draft like the veteran he is, Maher took the Avalanche and from there Huey was able to set himself up in black, where drafting red in his position would have been an incredible headache.

The draft started fine with Huey taking blue, black, and white cards, while Maher stuck to his red/green and both looked to be in a fine position. While blue is thought to be very weak in this format, Joel Frank in seat 5 and Jensen both reaped the rewards with several high-quality blue cards.

Maher and Jensen helped each other out, as one would expect, but around the table, things began to get interesting. Lucas Glavin on Maher's left started out black, while immediately to Glavin's left, Shaun Doran helped himself to white card after white card, including 5 Gravel Slingers. Doran was late to get into a second color, and expecting blue not to be deep enough to support a third drafter, Doran began to move himself into red, taking away from YMG's Danny Mandel's red/green deck.

Huey opened first in the second pack and had a choice whether or not he would fight Joel Lim on his right for write. In lieu of throwing his draft into chaos, Huey made the smart move of giving his deck much more potential by simply staying out of white.

Quietly Antonio De Rosa in seat 6 built himself a very fast red/black deck. While most at the table disagreed with his choice of Sparksmith over Goblin Sharpshooter, De Rosa's deck still ended up being a very fast build with lots of removal including 3 Solar Blasts! 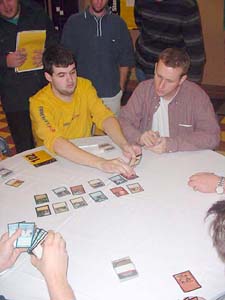 I thought Huey's deck could have ended up being faster with much more explosive potential had he taken a Wretched Anurid or two (a card for witch Jensen has a particular distaste) and wouldn't have had to pick Festering Goblin over a second Essence Fracture.

Maher's deck turned out to be a very slow red/green with a Kamahl and a few removal spells with no acceleration. On the Kamahl/Sparksmith choice Maher had in his own third pack, "I kept saying, if only [Kamahl] wouldn't have been there, I would have taken Sparksmith."

While I only expect a 1-2 from Maher's deck, The Great One can never be discounted as he searches for his second Grand Prix win in only a month. Jensen's blue/black has multiple Mistform Dreamers and Ascending Avens and looks to take it to the sky for damage early often. Jensen will probably win two of his three matches, and with a little Lavamancer's Luck, could find himself in the top 8.