The great one, Bob Maher Jr. has quite an impressive resume. Former Player of the Year, Pro Tour winner, Grand Prix winner, the list goes on. The one thing that is missing from it though, is a Masters victory. Seeking to remedy that this weekend Maher is in the Top 8 draft where three more wins will give him the elusive title.

As he flipped through the pack, Maher eyed the following cards: Roar of the Wurm, Wild Mongrel, and Cephalid Looter. Torn between these three cards, Maher took his time and as time is almost called he noticed the rare - Kirtar's Wrath. Killing creatures is good and killing them all is even better. Maher avoided a minor tragedy, and took the rare. The next pack Maher took a Mystic Zealot over Wild Mongrel, Patriarch's Desire, and Syncopate. The next pack offered another chance to establish a second color, as he is passed a Syncopate, Second Thoughts, and a Gravedigger. Maher takes the Syncopate, going into blue. The next few packs gets him a Kirtar's Desire, Second Thoughts (over AEther Burst), Aven Fisher, Mystic Visionary (over Second Thoughts, Cloudchaser Eagle) Angelic Wall, Patrol Hounds (over Scrivener), and a Kirtar's Desire (over Mystic Visionary).

So far Maher's deck was pretty solid, as any deck with Kirtar's Wrath is. His second pack offered him no choices as the only playable blue or white card is a Shelter. The next pack offered him a choice- take a Auramancer or go into or switch to another color with a Thermal Blast, Patriarch's Desire being the prime candidates. Maher chose to stay within his colors and was consistent in his decision when he took a Patrol Hound over a Thermal Blast. The rest of the pack is abysmal as the only playable cards that Maher is able to get are an Aven Flock, and a Peek. 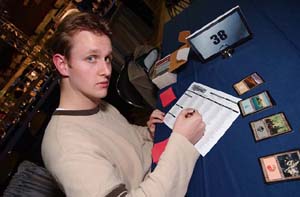 Once again Maher's opening pack offered him nothing playable except a Shelter. The next pack gave him a choice of another Shelter, Cephalid Looter and the opportunity to splash a third color for a Shadowmage Infiltrator. Maher took the Cephalid Looter as he needed creatures and did not want to delve into a 3rd color as he had no mana fixers or sacrifice lands. The next pack was a pack that Maher wished he could keep it all. The contained a Aven Fisher, Balashan Griffin, AEther Burst and a Wayward Angel, Maher smiled as he took the rare. His next few picks rounded out his deck nicely as he was able to get another Shelter, Syncopate, Dreamwinder (over Syncopate) and a Mystic Crusader.

Maher's deck has some bomb cards and contains enough solid cards that that will buy him enough time to get to his bombs. He has high expectations and perhaps he can add a Masters victory to his already impressive resume.