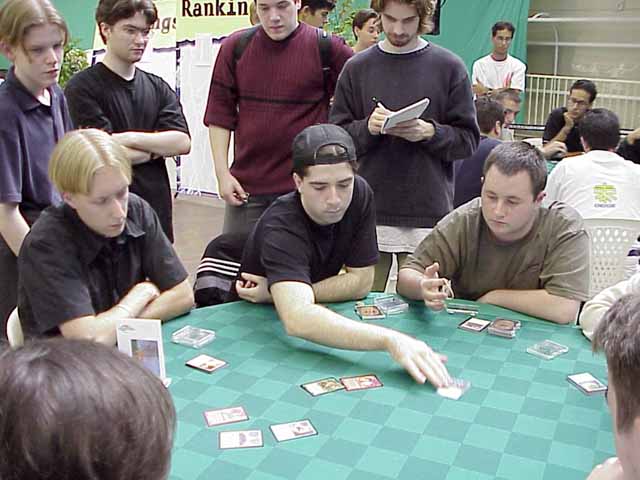 The draft started off with a confusing bang when the first booster resulted in Helder Coelho taking a second pick Wall of Distortion over Lunge and Thermal Glider! Levy, a little stunned, grabbed the Lunge and then Helder started taking red cards so Raphael had a really tough time from then on, never knowing whether to give up his 2 early pick Spidersilk Armors. I believe that in the end Raphael will play black/red, but amusingly Helder gave up on the red quickly and moved into black at the same time Raph chose to. The Frenchman might splash for the two Armours.

Bob, Mattias and Hector: The first boosters. **** means the rest of the pod.

So the three players next to each other in this case were B/R, U/W and B/G. What is more, the player to Bob's right was almost mono-green and to Hector's left was R/W so all three of these players were perfectly situated for their colours with no opposing players near them. Even better was how quickly the peripheral players settled, almost never taking an off colour card.

In my opinion two of these three players ended up with very playable decks although the 4 Spidersilk Armours might prove difficult for Jorstedt and his seven flyers. Bob, however, was a different story.

Bob: His weenie aggressive tactic continued through Nemesis as he picked up a Percher, Seal of Doom, Vicious Hunger*2, and Rathi Fiend, but a few good picks went missing and he ended up with 3 Flowstone Walls. The Prophecy cards were also not particularly kind to him and by the end of the draft the big man had been hard done by given his good positioning. He had 3 Nemesis red first picks and saw almost nothing.

Mattias: Normally you would be quite happy to see 3 Drake Hatchlings, a Cho-Manno's Blessing and a Counterspell + a few rebels, but the 4 Spidersilks really made him uncomfortable. Later on in the draft he did manage to pick up an Aura fracture and a Seal of Cleansing though and things started looking better as Raphael looked like he might have to sacrifice playing his green cards. His Nemesis cards weren't fantastic, but two Silkenfist Orders made up for the lack of quality, and the Prophecy came out quite well giving him a Broken Healer and a few good counters and flyers.

Hector: Well the Spaniard must have felt a bit shafted at the beginning of the draft, but when he followed up his Sever Soul/Armour/Slaver with some great Nemesis (Intimidator, Blastoderm, Percher, Woodripper, Hunger, Plague Witch). The fat got bigger still in Prophecy with Pit Raptor, Thresher Beast, Darba and a couple of other dudes and removal came in the form of two Steal Strenghts.