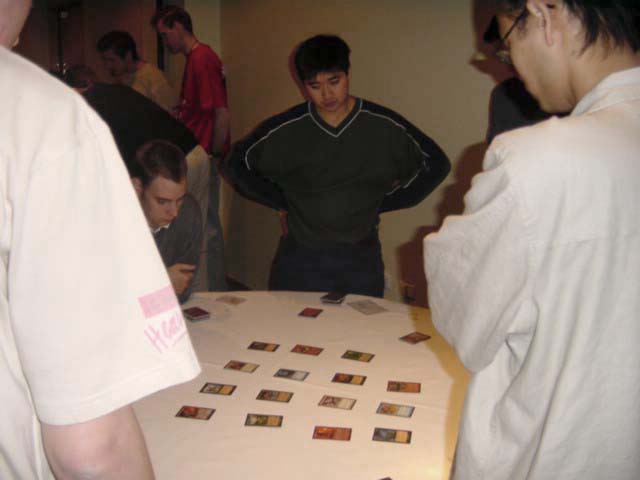 Chris Kwan had managed to play himself to a perfect 3-0 record on his first draft table and sat down (or stood up) at table 1 for the second draft. Chris was drafting in 6th place and managed to put together a strong Red/Black beatdown deck. He faced nearly no opposition for red, and both the players to his left and right worked really well with him. Chris had this to say about his draft - "It was a good draft for me. Doecke (Michael) on my right ended up being stuck with Blue/White. The guy on my left went with White/Green so I faced no direct competition for my colours. Red was only being drafted by the player opposite me so it was all good".

When asked how he expected to perform in the draft Chris predicted a 2-1 performance. " I will get beaten by the other red drafter. Basically he has a deck with as much takedown as me but bigger creatures. I expect him to win the draft table". Chris also thought that the draft as a whole went really well for most players. "Doecke was the only player who really had any problems as he was forced into fighting for colours".

Early on in the draft Chris opened up his first Invasion pack to see not a single red card, which was a bit rough since the majority of his picks up to that point were red. He ended up taking a Vodalian Zombie. "I'm not going to draft a Ravenous Rats as a first pick" stated Chris. In hindsight Chris did have this to say about his drafting - "I should have maybe drafted some Green. I certainly think I should have taken a few Stuns since I was presented with plenty of opportunities to do so". Chris's plan to work with the players to his left and right rather then force his favourite colours turned out to be a good call and he has high hopes to enter day 2 with a good record.