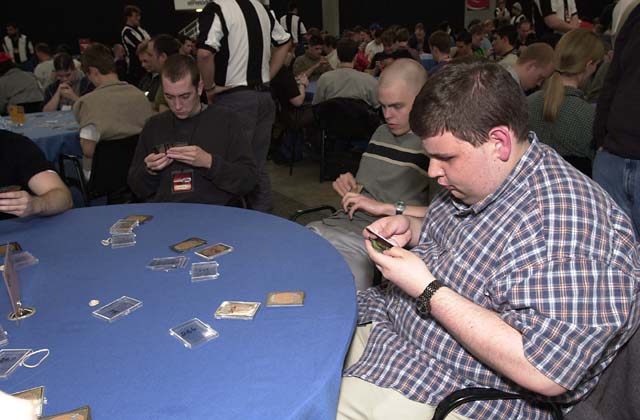 Three years worth of Pro Tour-Los Angeles winners formed a wall on one side of table 12 for the second draft. 1997 winner Tommi Hovi was flanked on his right by 1998 winner David Price and on his left by 1999 winner Steve O'Mahoney-Schwartz.

Price prefers to draft black-red, so he didn't hesitate to take Agonizing Demise from his first pack. Hovi also opened a Demise, but he declined it. That's not too unusual since there are lots of uncommons and rares that are considered better, but Demise is usually considered the best common. Not by Hovi. He doesn't even think it's the best card that requires black mana! He took Probe and passed the Demise over to Steve O. OMS had also made a really interesting first pick: he took Thornscape Apprentice over Keldon Necropolis. The Necropolis is widely regarded as one of the rares people hope to open, but OMS went with the green-white card instead. Perhaps he's gambling that this will be yet another table where green-white is underdrafted. Steve also probably knew that Hovi prefers to draft blue and he certainly knew that Price prefers black and red. (Ironically, Steve's strategy is the very same one Hovi used to win the second PT LA: Hovi saw at his first draft that no one wanted green (back in Mirage-block) and so he drafted it the rest of the way.)

Steve had trouble sticking to his guns when Hovi passed him that Agonizing Demise. He first thumbed Llanowar Knight to the front of the pack, but then he kept going back and staring at that Demise. He used the full time and then when tournament organizer Jeff Donais announced "draft" he slammed the Demise onto his pile. Hovi followed up his Probe with a second pack Razorfoot Griffin sending Armadillo Cloak to Steve. That Cloak simultaneously confirmed Steve's suspicion that he was in a good seat for green-white and probably made him wish he had taken that Llanowar Knight.

Price took Soul Burn second and then also took Soul Burn third, over a second Armadillo Cloak. That Cloak fell into Steve's lap with Steve's 5th pick, right after a 4th pick Jade Leech! From there on out, the third champion pretty much stuck to their colors and just drafted the best available cards for their decks. Price wound up with a somewhat trashy black-red (that will probably splash blue for Zanam Djinn), but at least he got passed a Magma Burst in Planeshift. Hovi has blue-white with a touch of black. And Steve has a fine green-white deck, including such gems as a 12th pick Sunscape Apprentice, a 3rd pick Fleetfoot Panther (over Thornscape Battlemage) and a 4th pick Nemata, Grove Guardian.