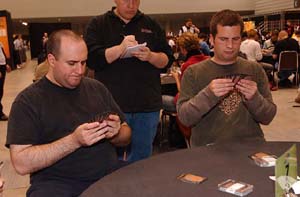 You know you're at a tough draft table when Dave Humpherys has only the 5th highest Pro Tour point total and half the guys who are drafting have "Pro Tour winner" on their resume. Each of the drafters at table 7 sat down with a 3-1 record, knowing that the next three rounds were crucial. Whoever posted a 3-0 mark would probably get to sit down at draft table #1 on Saturday morning, but anyone who picked up 2 losses would only get to sit down in the side events area. Here's how they lined up:

1 Dirk Baberowski – The former rookie of the year has the second most PT wins ever (with 3) and is currently second in the Player of the Year race.
2 Riccardo Tessitori – Tessitori was one of the judges at Pro Tour Venice and is making his debut as a Pro Tour player this weekend.
3 Bart Edwards – Another PT rookie, Edwards hails from Atlanta, Georgia.
4 Jeroen Remie – Yet another in a long line of great Dutch players, Remie hasn't posted any major event wins, but he has put up a steady stream of high finishes and established himself as a regular on the Masters Series.
5 Osyp Lebedowicz – Lebedowicz won the last stop on the Pro Tour and currently sits third in the Player of the Year race.
6 David Humpherys – The Hump has played in all but two Pro Tour stops over the last eight years and posted more than his fair share of quality finishes.
7 Tomohiro Yokosuka – Yokosuka didn't speak any English and sat there oblivious as everyone else at the table talked about their previous results.
8 Gary Wise – He of the "Limited Skills," Wise made his first Top 8 in this very same building back at Worlds '99.

I watched Wise and Baberowski draft their decks and by the end of the draft Baberowski was humming the theme song from "The Great Escape." His draft was a total train wreck for about 30 picks, and he claimed later that he actually contemplated just standing up from the table and walking away, but Legions saved him and he wound up with a quite playable deck. It's three-color and a little on the janky side, but that's just the kind of deck that Baberowski seems to have success with.

It all started in pack #1 when Baberowski was faced with a classic dilemma: Sparksmith or Slice and Dice. One the one hand it's great to get such a high-quality first pick, but on the other hand you have to pass your neighbor a great red card and then hope he doesn't completely screw you in the second set of packs. Well, Baberowski took the Slice and wound up sharing not just red but also white with his left-hand neighbor (Tessitori). Baberowski debated long and hard about his second pick: Pacifism or Riptide Entrancer. He wound up settling on the Entrancer, probably because blue-red is such a powerful archetype, but that Pacifism went straight into Tessitori's pile so when Baberowski later switched into white, he could have anticipated problems. 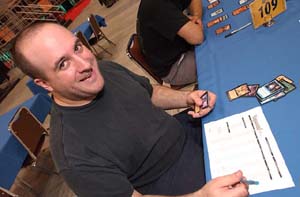 Wise had made the very obvious first pick of Infest. He then took Shock second, from a pack that didn't have much else in it other than a Threaten (which Baberowski took). When Wise then took a third pick Choking Tethers it looked like both he and Baberowski wanted blue-red and it was like watching a slow motion automobile accident.

However, both drafters seemed to sense over the next few packs that things weren't working out quite right and they each made intelligent audibles. The green was flowing and so Wise abandoned his blue experiment in favor of a Symbiotic Beast. At about the same time, Baberowski noticed that Wise was hooking him up with white cards and he decided to move into white despite not taking that second pick Pacifism. When I talked to Wise after the draft, he explained that he actually drafted differently because Dirk was a friend of his. Wise said he would have consider taking a fourth pick Glory Seeker for himself, but he felt he had already indicated that he wasn't going white, so he passed that Glory Seeker along for Baberowski to draft 5th. Baberowski sucked down medium to halfway ok white cards for the rest of the first set of packs, but what he really did was put himself in a position where he would be able to take advantage of whatever white cards Wise passed to him in Legions.

Going into the second set of Onslaught packs, Baberowski had a Slice and Dice, a Threaten, and a Crown of Fury in red, but nothing else. He had a Riptide Entrancer as his only decent blue cards and he had a bunch of mediocre white cards. Based on the way he was sorting his cards between packs it looked like he wanted to draft a red-white beatdown deck. The problem was that was exactly what Tessitori was drafting too (because that's what Baberowski's early passes indicated that he should draft) and Tessitori would be feeding Baberowski for the rest of Onslaught. Dirk's first pick was a Gustcloak Harrier and then with his second pick he indicated that he had completely given up on his blue thought by drafting Barkhide Mauler over Mistform Dreamer and Riptide Shapeshifter. After that came Goblin Machinist over Battlefield Medic, Akroma's Blessing, and Ascending Aven. Grassland Crusader can't have excited him as a fourth pick and he shrugged as he took a fifth pick Lavamancer's Skill that didn't look like it would be at full power in his red-white deck.

When Baberowski's sixth pack had no playable red or white cards he was forced to start thinking about blue again. He took Mistform Dreamer and then followed it up with a Riptide Biologist and a Lonely Sandbar. Watching Baberowski sort his cards before Legions, it was obvious that he was couldn't tell what he was supposed to do. His various audibles seemed reasonable at the time, but none of them worked out and he had like 11 playables with just 15 picks left to go.

Dirk thought long and hard about whether to first pick Deftblade Elite or Defender of the Order. He eventually decided on the Elite. He then took Swooping Talon over Wingbeat Warrior second and made quite an interesting third pick: faced with a choice between Deftblade Elite and Wingbeat Warrior, he decided instead for Keeneye Aven, reading it (correctly) as a sign that there would be more blue cards to come. Way back in the first set of Onslaught packs when Baberowski was first thinking about blue, he didn't get anything good passed to him after about pack 3. But if Gary Wise really was drafting blue, there's very little chance Baberowski would have gotten a shot at this third pick Keeneye Aven. So Baberowski took it. The very next pack confirmed his theory: he got to choose Wall of Deceit over a second Keeneye Aven. Echo Tracer fifth (over White Knight) was followed by Daru Stinger sixth (over Keeneye Aven and Primoc Escapee). The hits just kept coming with Deftblade Elite seventh and Mistform Seaswifteighth. It was indeed a great escape for Baberowski. 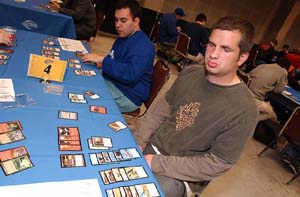 When last we talked about Gary Wise's draft he had an Infest, a Shock, a Choking Tethers, and was thinking about dipping into green. By the time the first set of Onslaught packs ended he was clearly black (with Shepherd of Rot, Severed Legion, Thrashing Mudspawn, and Feeding Frenzy), but it wasn't at all clear what his other color (or colors) would be. His first pick from the second set of Onslaught packs put him to a decision: it was yet another Sparksmith/Slice and Dice pack, but this one had Kamahl thrown in for extra flavor. Wise knew that his deck wasn't set up well to live through a Slice and Dice so he took the Sparksmith. He laughed when his next pack gave him the option of Mythic Proportions, but Smother was a plenty good card for his black-red deck. Third pick Death Pulse was nice too. For the rest of the draft Wise drafted the best red or black card available to him and passed along all those blue and white Legions goodies to his buddy. For his trouble he was rewarded with a Graveborn Muse and the opportunity to draft two different copies of Scion of Darkness (he only took one of them).

In the end I didn't think either player wound up with a great deck, but I was impressed at the way each of them managed to avoid the disaster that might have been if they had refused to consider switching from their initial strategies.