Only one draft remains for the 64 competitors of day 2. Some players are almost guaranteed in the Top 8, while others are only playing for the money. However, at the Draft Pod 3, we are sure to find an exciting battle for the Top 8, since they have their backs against the wall, with no one in position to afford another loss. 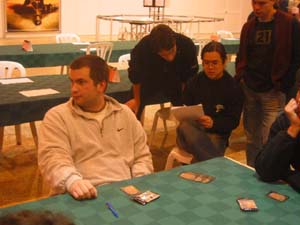 Dirk Baberowski works the table.In table 3 we can find two Spanish, and six players from other different countries, such as Argentinean Diego Ostrovich, Austrian Felipe Saavedra, Portuguese Luis Sousa, Dirk Baberowski, Nicolai Herzog and Anton Jonsson. Not the kind of table you'd like to have with the daunting task of winning it all.

1- The first pack for Baberowski didn't present many first pick caliber cards, with the German choosing Blistering Firecat over Gluttonous Zombie and Daru Lancer. Those were bad news for Luis Sousa at his left who had picked a red card as well, Battering Craghorn.

2- Baberowski, like so many others, would be pleased to draft Red with Blue, and Riptide Shapeshifterseemed good enough for him to try to force that color combination. He shipped some Green Beasts for the Shapeshifter. From the other pack, Luis Sousa took the Gluttonous Zombie

3, 4, 5 - Baberowski solidified his position in Red with Avarax, Pinpoint Avalanche and Forgotten Cave, passing some more Green beasts, like Symbiotic Beast. Sousa was going through difficult times to establish himself in Red, picking black cards such as Screeching Buzzard and Haunted Cadaver, passing the Green to Anton Jonsson, two seats away from Baberowski.

6- An Ascending Avenmade sure Baberowski wouldn't abandon his plan, however this Booster also contained Convalescent Care and Daunting Defender. Luis Sousa took this as a sign to switch into White.

7- Green just kept coming. This time it was Elven Riders, which was ignored in favor of a Goblin Sledder.

Until the end of the first Booster, Baberowski drafted some usual blue cards like Riptide Biologist, Aphetto Alchemist, Sage Aven, and a second Forgotten Cave. The decision to change into White was gravy for Luis Sousa. Red was not being too exciting for Baberowski, so there was none left for Sousa. Meanwhile, some white Cards were passed, which probably ended in Sousa's draft pile, such as Battlefield Medic, Crude Rampart and Grassland Crusader.

1- The Booster Baberowski opened had Riptide Replicator. However the German seemed to dislike the artifact, and was never tempted into taking it. This put him in a very bad situation, since the other best Red or Blue card he could found was a Charging Slateback. Sousa first picked Mobilization, apparently passing some good red or blue cards.

2- Or maybe not! Although Sousa picked a Mobilization from it, Baberowski could only find Krosan Tusker, Nantuko Husk and Mistform Shrieker. He had to resign himself with the latter.

3- The Boosters were definitely not going into Red. At this time Anton seemed to be in Green-White and Sousa in White-Black. But the best Baberowski encountered was his third Forgotten Cave.

4, 5, 6- Ixidor, Goblin Taskmaster and Goblin Sledder (over Essence Fracture) were all drafted by a not very happy Baberowski.

7- And then... everything changed. This Booster presented him the Red-Blue drafter's most wanted card, Lavamancer's Skill, which he took, under the costs of passing a Blatant Thievery in the same pack. He sure wished that these two had come in different ones, especially considering what his first picks were.

1- Baberowski picked Echo Tracer from his First Legions Booster, which also contained Ridgetide Raptor, although he looked at the 13/13 with Morph, which also had an upkeep cost of double Green. He could get it with the Shapeshifter, but not keep it for more than a turn.

2- Keeneye Aven was the only card he could get from this Booster, which meant he passed a Windborn Muse, that Sousa would get in third pick.

3-Covert Operative was picked over Crested Craghorn, shipping some White Fliers to Sousa.

Baberowski's draft could have been really good. The good Red and Blue cards, especially Red never came. The card pool was weak, at least at this side of the table and the best cards from it were Green and White.

We really can't predict how he will end, but it seems to be a tough task at such a strong table. However we can never dismiss Dirk Baberowski's abilities in Limited.

Luis Sousa ended with a solid White-Black cards that features cards like Mobilization, Windborn Muse, Convalescent Care and Scion of Darkness. He also has a very solid selection of creatures with tons of Evasion, like Gluttonous Zombie, Screeching Buzzards, the Muse, Sootfeather Flock, Severed Legion and some more White Fliers, but he lacks removal, carrying only a Swat.

After three more rounds, we'll see who's the survivor of such magnificent Draft Pod.