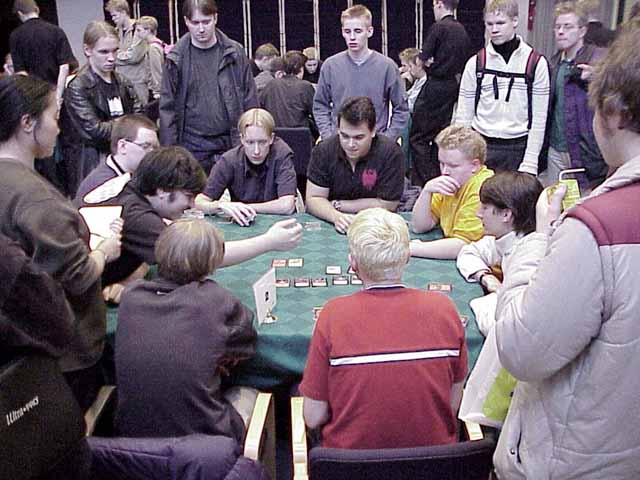 The players went into colours pretty early. Florent opened a Tsabo's Assassin which he took, Dominik picked a Dream Thrush and signaled that he wanted blue, Zvi got a Thornscape Apprentice and went into green. In the second pack, Harkonen opened an Armadillo Cloak, a Duskwalker and a Spite/Malice, and he chose the latter. Dominik got a Glimmering Angel and fell into blue and white from there, Zvi got the Armadillo Cloak and went into green and white while Florent strengthened his black by getting Recover and Phyrexian Reaper on the wheel.

Dominik opened the third booster, and it contained Captain Sisay, a Shivan Emissary and a Power Armor in addition to the Benalish Trapper that he chose to pick. Zvi took the Power Armor, while Thoren got the Emissary and went into red. Then Zvi opened a Stalking Assassin, a Benalish Heralds and a Faerie Squadron. The booster didn't really have any good cards in green and white, so Zvi took the Assassin - a card that his deck would have big problems dealing with and that he, in theory, could play if he got some Harrows or other mana-producers.

Thoren opened another Shivan Emissary and went into black and red for sure. Dominik picked an Obsidian Acolyte, Zvi got a Kavu Climber and an Explosive Growth on the wheel and Dominik took a Dream Thrush as his second pick in the pack.

There were plenty of good cards in the draft. Jorstedt opened a Rout and a Faerie Squadron, he teased the white and blue Justin Gary about taking the Rout but eventually picked the Squadron. Gary happily added the Rout to his deck. Dominik got a Worldly Councel and a Orim's Touch out of the pack, while Zvi got a Harrow and a Frenzied Tilling.

Gary then opened a Distorting Wake, an Assault/Battery, a Duskwalker and a Probe, and he was pretty satisfied about picking the Wake. Osmo took the Assault/Battery, the Duskwalker was the best card left so Dominik picked it up, Zvi took a Rooting Kavu and a Llanowar Cavalry and Dominik took a Maniacal Rage as his second pick of the pack. Finally, Osmo opened an Agonizing Demise and a Samite Archer, but he took a Quirion Elves and let Florent have the Demise. Dominik got the Samite Archer, Zvi took a Llanowar Knight and a Slimy Kavu, and Dominik got a Reviving Dose on the way back.

In the second set of boosters, Osmo opened a Plague Spores, a Stormscape Apprentice, a Rampant Elephant and a Scorching Lava that he took. Justin Gary got the Apprentice, Zvi picked a Dromar's Attendant and a Fertile Ground while Dominik got a Coastal Tower and the Elephant. Then Justin Gary opened an Armadillo Cloak, a Scorching Lava, a Glimmering Angel a Phyrexian Slayer and the Zanam Djinn that he chose. Zvi was very happy about getting a second Armadillo Cloak, Dominik got a Glimmering Angel and a Dismantling Blow, and Zvi took a useless Scarred Puma as his last pick.

Jorstedt's second booster held a Phyrexian Slayer, a Metathran Aerostat, a Repulse, a Glimmering Angel and a Vodalian Serpent. Mattias chose the Slayer, Zvi got the Sulam Djinn and Dominik took a Repulse and a Holy Day. Thoren opened a Phyrexian Slayer, a Dueling Grounds, a Benalish Trapper and a Charging Troll, and as he took the Slayer, Zvi's deck suddenly looked really ugly when he scooped up the Troll to go with his Cloaks. Dominik was happy about getting the Trapper, he also got an Orim's Touch while Zvi took the Dueling Grounds. Then Dominik opened an Exclude that he took, Harkonen was happy about getting a Skizzik and Zvi got an Aura Shards and a Thunderscape Apprentice.

In general, the players cooperated a lot. Florent was with red and black, Harkonen was with red and black as well, Dominik took white and blue, Zvi took white and green, Thoren was with red and black, Jorstedt picked blue and black, Gary took white and blue, and Osmo was with red and green - at least everybody thought so. But when Harkonen opened a Poucncing Kavu, a Cursed Flesh, a Kavu Chameleon, a Benalish Lancer and a Benalish Trapper, he seemed to change his mind. Harkonen took the Pouncer, Jeudon got the Cursed Flesh, but instead of taking the Chameleon, Osmo picked the Benalish Trapper, suddenly going into white. So Justin Gary had to pick the Benalish Lancer instead, but he was clearly dissatisfied. Zvi got the Chameleon and a Savage Offensive, while Dominik got an Ardent Soldier and a Protective Sphere. And when Florent opened another Trapper and took a Pouncing Kavu, the Finn added another one to his deck while Gary took a Samite Archer. Zvi got a Benalish Lancer and an Irrigation Ditch, while Dominik took a Stormscape Apprentice and a Hanna.

Jeudon then opened his third booster. He took an Exotic Curse, while Domoinik happily picked up a Shackles and Zvi got a Thicket Elemental. The American also got a Shivan Oasis and Dominik got a Sterling Grove out of the pack. Then Harkonen got a Crypt Angel in a rather strong booster that contained a Ruham Djinn, a Cinder Elemental, a Shackles and a Faerie Squadron that Dominik chose. Zvi took the Shackles to add some removal to his deck.

Dominik then got his third Benalish Trapper of the day, pssing a second Thicket Elemental to Zvi. Mattias got a Goham Djinn out of the pack as well. Zvi certainly got enough fat though. His pack contained Molimo, Maro-Sorcerer in addition to a Tribal Flames, a Plague Spores and a Pincer Spider that Dominik picked as the wheel - there weren't any cards left in his colours after he had picked a Sway of Illusions.

Jorstedt's last booster gave him a Zanam Djinn. Justin Gary got a Benalish Trapper and Jeudon picked up a Plague Spores before Dominik took a Crimson Acolyte and a Tidal Visionary. Zvi got a Dromar's Attendant and a Llanowar Cavalry. Then Justin Gary opened yet another tapper, a Stormscape Apprentice that he chose. The booster also contained an Annihilate, a Scorching Lava that Osmo took and a Keldon Necropolis that went to Florent. Harkonen, in spite of being red and black, took a Tower Drake, Dominik got a Wings of Hope though, while Zvi got an Explosive Growth to add to all his creatures. He also got a Rampant Elephant.

Finally, Osmo opened a pack with Tribal Flames, Reckless Spite, Phyrexian Delver, Benalish Heralds, Repulse and Pincer Spider. Everybody looked shocked when he chose the Benalish Heralds - Dominik got the Repulse but his deck really needed some bigger creatures. Zvi was happy about getting the Pincer Spider, and he took an Orim's Touch as well while Dominik's last card was a Sunscape Apprentice.

All in all there were a lot of good cards on the table. But Zvi got an amazingly good white and green deck with two Armadillo Cloaks and two Charging Trolls in addition to solid creatures and even a Shackles for removal. Dominik also ended up with a solid deck with five tappers, but he totally lacked big creatures to stall on the ground. One Wings of Hope is not much. Regardless, several people on the table got really strong decks. The red and black players, especially Thoren, got a lot of removal, and Gary picked up a Distorting Wake and a Rout in addition to all his tappers. So the outcome of the draft was in no way a given after the draft.