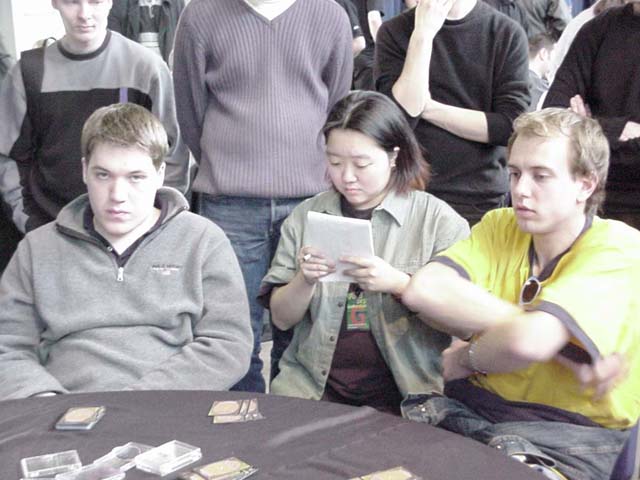 Eivind Nitter from Norway and Kai Budde from Germany sat next to each other in the second draft of 2001 Grand Prix Gothenburg. While Budde is one of the top 8 veterans with two Pro Tour wins, three Grand Prix wins, Nitter hasn't made it all the way to the top yet. Several times, he has been in contention but then failed, but with a 9-0-1 record after the first ten rounds he needed only one more win to make it to the final playoff. In the draft, he sat to the left of Budde, meaning that the German would feed him for two sets of packs.

Needless to say, Nitter was more than happy when he opened up a Ghitu Fire. His pack also contained an Armadillo Cloak, a Shackles and a Faerie Squadron. Kai opened a Repulse, a Recoil and an Ancient Kavu, and he went into black by taking the Repulse. Nitter then picked the Ancient Kavu.

Kai's second pack held another Recoil, a Thornscape Apprentice, a Lightning Dart and a Tower Drake, and going further into blue, Kai took the Drake. He then got a Faerie Squadron in the third pack, passing on a Shackles, a Hooded Kavu and an Urborg Drake. Nitter chose the Kavu.

The fourth pack gave Kai a Soul Burn. He passed an Urborg Shambler, but Nitter chose not to go into black. Instead, he chose a Serpentine Kavu and looked to green as his second color. That seemed to be an excellent choice as his next pick was a Raging Kavu from a pack where Kai (passing yet another Recoil) took a Repulse. The German then took an Hypnotic Cloud, although he was considering going red for a Pouncing Kavu.

He did go red though, as the next pack gave contained yet another Pouncing Kavu. Kai got several more decent picks out of the first round of packs. He picked up an Urborg Volcano, a Slimy Kavu, a Backlash, a Mourning, a Sulfur Vent and a Savage Offensive. Nitter also had some good picks. After the Pouncing Kavu he was passed an Explosive Growth, a Sulam Djinn, and he also picked up a Tangle. So after the first set of packs, Kai was into red, blue and black while Eivind was with red and green.

At this point, Nitter was heavily into green and red, and he continued picking up red and green spells and creatures. A Firebrand Ranger gave him an early drop, and then he got an Explosive Growth, a Yavimaya Barbarian and a Rooting Kavu before the good picks kind of dried up. Meanwhile, Kai scooped up a Metathran Aerostat, a Halam Djinn, a Recover, a Dream Thrush and a Prohibit, along with an Attendant that he could play if he should need any creatures. Thus the second pack of cards sent Nitter further into green and red while Budde confirmed that he was going three-colored.

Budde's third pack didn't hold any of the bombs he had hoped for, namely Magma Burst or Flametongue Kavu. He opened a Strafe, a Rushing River and a Cavern Harpy, and so he picked the Harpy. Nitter, on the other hand, was more than excited when he saw the contents of his pack. He got both a Thornscape Battlemage and a Flametongue Kavu, and the Kavu found its way to his card pile.

However, it was Kai's turn to be excited when he took a look at his second pack. It held a Nemata, Grove Guardian, a Slingshot Goblin, a Lava Zombie, a Bog Down, and a Flametongue Kavu that made Kai smile. He even patted his opponent on the shoulder, a move that gave him a warning, although Kai didn't mind.

Nitter took the Strafe as his second pick, and he was satisfied by getting a Nemata as his third pick. Kai's third pick was a Phyrexian Bloodstock, and then picked up some more creatures and a Bog Down. The Norwegian figured that he needed some smaller creatures though. He took a Quirion Explorer over a Mire Kavu, then he got a Hooded Kavu, a Star Compass and a Quirion Dryad before another Quirion Explorer revealed itself in a pack.

Kai didn't get a lot of useful stuff after the packs had gone their first round though. He took a Sinister Strength and an Arctic Merfolk and then he picked up a Draco and grinned. Nitter got a Thunderscape Familiar and Root Greevil, but then all the bad cards started coming. Still, Nitter had a very good selection of cards in his deck. Many of his cards were a little expensive, however, he managed to get a few quick critters including two Explorers that could speed up his mana. "Sure I'm happy. I got a lot of good cards all the time, and they were in my colors," Eivind says. He admitted to almost taking the Armadillo Cloak over the Ghitu Fire in the first pack though, as he likes playing green/white. He didn't though. And although he lost in the first round against Alex Shvartsman, he figured he would manage to get his one win. "At least I ought to win once," he smiles.

Budde ended up with a decent red, blue and black deck. With a few tricks like the Nightscape Apprentice/Flametongue Kavu combo along with some good creatures and two Soul Burns, he should be able to win at least once and then draw into the top 8. Unfortunately, he drew nothing in the first match, and so he would have to win both his following matches in order to make the top 8. "The draft went pretty well. I miss a little bit of black removal. But I lost against Quirion Trailblazers. I didn't draw anything," he sighs, adding: "If I draw like that, I'm not going to make it."