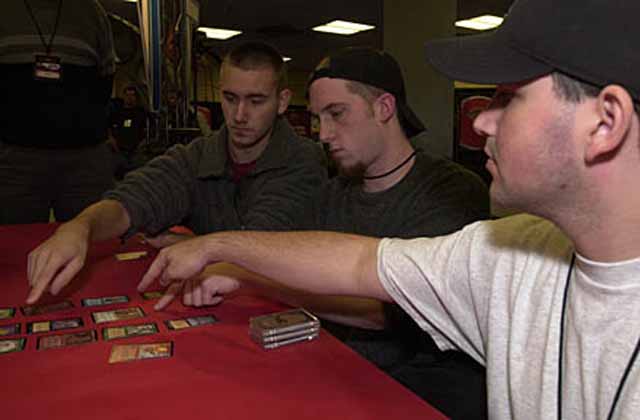 Neither of these teams are dark horses, although they are not as well known as some other teams. Team Dark Side of the Moon is mostly made up of Bostonians; Brian Lynch and Ray Tautic are both solid Pro-Tour players, although neither has made a top eight. Team B.I.G. has been a team for a long time, and has lot of experience money drafting. Igor Frayman is a veteran Pro-Tour player, Gabe Tsang is one of the best Canadians in the world, with several top eights to his credit, and Brian Hacker, although perhaps best known for his multi-colored hair and wild trips to Las Vegas, is another good player with a top eight in Pro-Tour Dallas.

In the first several packs of Mercadian Masques, the players were still tentative about their color decisions; in fact, many of the best picks would not end up being used, like Gabe Tsang's Haunted Crossroads, or Ben Helprin's Spidersilk Armor. Ray Tautic, on the other hand, had already drafted some good red, like Kris Mage and Wild Jhoval. Eventually, Team B.I.G., after some frantic gesturing by Brian Hacker, settled in to their colors, with Hacker drafting black/red (making a Ramosian Rally he had drafted earlier not very useful) with a Thunderclap, Sever Soul, and Highway Robbers, Gabe Tsang settling into green/white (with a Ramosian Sergeant and Spidersilk Armor) and Frayman getting some very good blue/black (Drake Hatchling, Sailmonger, and his bomb, Cateran Enforcer). Team Dark Side of the Moon also decided on their colors, with Ray Tautic picking up some good red/black (Sever Soul, Midnight Ritual, Undertaker), Brian Lynching playing red/green (with some fine removal like Shock Troops and Thunderclap) and Brian Halpren starting a rebel chain in a blue/white rebel deck (including an Outrigger and Orim's Cure)

The Nemesis packs prove to be full of good cards for both sides, although Team Dark Side of the Moon seemingly got a slight advantage. Ray and Ben did particularly well, with Ben picking up the red uncommon bombs that are so typical of Nemesis, such as Arc Mage, Ancient Hydra, and Rupture. Brian Lynch was forced to counterdraft a Stronghold Zeppelin in the first pack, and only managed to pick up a few good cards, including Belbe's Armor, a Blastoderm, and a Seal of Fire. Ben Halpren picked up more pieces of the Rebel chain with a Defiant Vanguard, and also got other solid cards like Parallax Wave, Voice of Truth, Jolting Merfolk and two Wandering Eyes. Igor, realizing that he will be playing an opponent with a blue/white deck, drafted two Rootwater Commandos to islandwalk to victory, but made what might have been a crucial mistake. In one pack, he had a choice between a Seal of Doom and a Rathi Assassin. Even though he was playing against a deck that had lots of searching rebels that tap (Ben's deck) and has a way to summon the Assassin (the Cateran Enforcer), he decided to take the Seal of Doom, leaving the Assassin to Brian (where is would be vulnerable to Ray Tautic's removal). Gabe probably did the best of Team B.I.G. during the Nemesis drafting, as he picked up a Blastoderm, two Defiant Falcons, a Defender en-Vec, and a Topple. Brian got one bomb (Flowstone Slide) and the Assassin, but didn't quite match Ray's bombs. 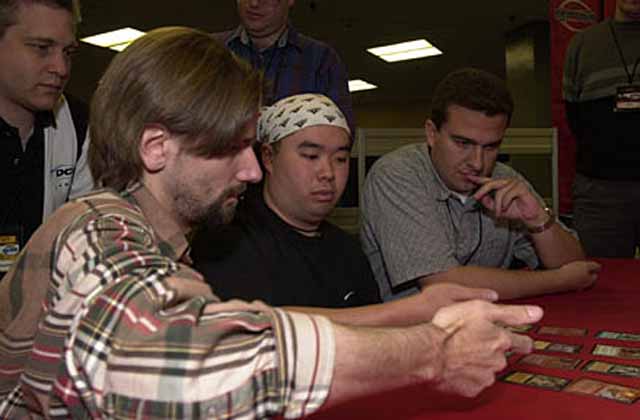 Although there are many good cards in Prophecy, there is one card that everyone looks for: Troubled Healer. And Prophecy was very kind to Ben, as he managed to pick up not one but two Troubled Healers. Even though Igor had some black removal (Vendetta, Seal of Doom), the Troubled Healers were very bad for Igor. Ben also drafted a Reveille Squad, a Withdraw, and a Stormwatch Eagle. Brian made one questionable choice, as he took a Silt Crawler over a Rhystic Lightning (leaving it for Brian), but did get some good creatures like Fault Rider and Chimeric Idol. Ray picked up an Agent of Shauku and some other good cards, although nothing like the bombs he got in Prophecy. Igor did get Coffin Puppets and a few Steal Strengths. Brian got some removal with a Rhystic Lightning and a potential winner with Searing Wind (which interestingly he didn't get until late in the pack) and some good creatures. But it is Gabe who did the best of Team B.I.G., as he drafted a first-pick Living Terrain, a Shield Dancer, and a card that could singlehandedly defeat Brian Lynch, Troubled Healer.

Overall, it looks like Brian, with his two troubled healers, and Ray, with his numerous red bombs, have an edge over their opponents. Gabe's Troubled Healer could spell defeat for Brian if Gabe draws it.