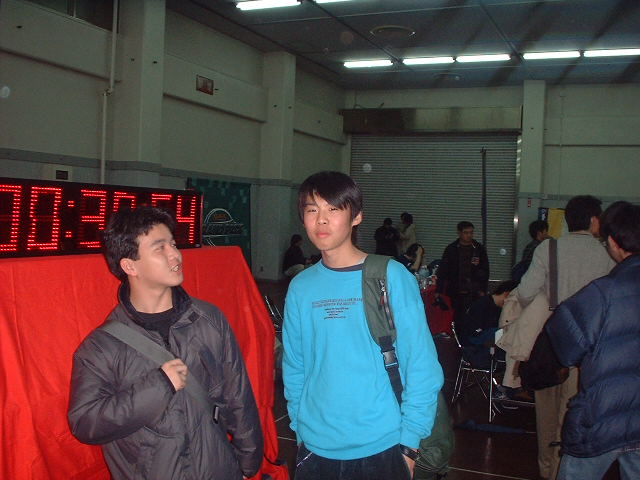 Katsuhiro Mori is a 19 year old high school student and one of the best players in Japan. He was in a tough drafting pod as would be expected after being in the top 8 after ten rounds. Katsuhiro was seated to the left of Japanese legend Masaya Mori and to the right of Masaya's team mate, Koby Okada.

1 - The pack that Katsuhiro opened had two cards he considered taking, Restock and Agonizing Demise. He naturally took the demise.

2 - Second pick was between Scorching Lava, Armadillo Cloak and Slinking Serpent, Scorching Lava winning out over the cloak. Initially Katsuhiro obviously wanted to stay away from the green-white strategy.

4 - Dusk Walker and Urborg Phantom on offer from his preferred colors this time, Dusk Walker being the stronger of the two and quickly chosen.

5 - This booster saw a change of direction for Katsuhiro, the options being Trevor's Attendant, Tsabo's Web, Trailblazer, Wax/Wane or Benalish Lancer. The double white to pay kicker didn't seem to bother him and he took the lancer.

6 - A hastily chosen Fires of Yavimaya was taken over little other options. The most interesting other card from this pack was the 2nd Tsabo's Web in two packs. A rubbish card for Invasion Limited, unless your opponent has a Keldon Necropolis of course.

7 - This pack had more options but not really from the right colors for Katsuhiro, with Kavu Aggressor, Hunted Kavu, Llanowar Sentinel and Galina's Knight on offer. He took Kavu Aggressor.

After booster one things were still a little up in the air, with a strong black red start but random colors coming later. Katsuhiro will be hoping to consolidate on three colors from this next booster.

1 - Katsuhiro must have been very happy with his booster opening skill today, seeing another Agonizing Demise taken as first pick. The other option he was considering was Trench Wurm. The rare from this pack was Captain Sisay.

2 - Another strong black/red start was reinforced when Koby Okada passed him a Thunderscape Master. Despite the high quality of other cards in this booster, Probe, Pouncing Kavu, Urborg Shambler and Harrow, it was a very easy choice. A master of a color I am playing, thank you very much.

3 - Katsuhiro was considering taking the Restock from the first booster he opened, but passed it up. He had another opportunity to take Restock in this booster but yet again black removal won him over, this time taking Plague Spores.

4 - This booster saw the addition of blue to Katsuhiro's card pool in the form of Probe. With little else on offer he took the most powerful card available from this pack.

5 - The last choice was looking good after more tasty blue was available in pack to. Some say Repulse is the best blue common for Invasion limited and Katsuhiro must have agreed, taking this card over other strong options from his primary colors including Zap, and Viashino Grappler.

6 - Viashino Grappler was taken form this pack though, with the only other option being Addle which is a little random due to the basically all decks being at least three colors.

7 - Dromar's Attendant was passed up for Ancient Kavu here and . . .

The rest of booster two was:

So after two boosters Katsuhiro was still drafting black/red where possible but strayed into other colors for possible splashing. To his right Masaya Mori had the foundation of a strong looking green/white/blue deck and to his left Koby Okada had mostly blue/white/black.

1 - I was quite surprised when Katsuhiro drafted Benalish Trapper over Tribal Flames for his first choice of the final booster. Other strong cards from this pack were Urborg Drake, Tower Drake and Aura Mutation.

2 - It was if Katsuhiro knew that he was going to have a good reason to include white in his deck, when from the second pack he was passed Dromar. It is never a hard choice when the words Dragon Legend are involved.

3 - More flyers on offer here for Katsuhiro, but this time Halam Djinn taken over the Tower Drake and the other strong cards, all being green.

4 - Katsuhiro's deck is looking four color at this point so the Phyrexian Lens he drafts from this pack could be very useful. He was considering Sway of Illusion until "Draft" was announced but chose the lens.

5 - There were three cards which received special consideration from Katsuhiro this time, Kavu Runner, Canopy Surge and Strength of Unity. Back to the roots of this draft, the red Kavu being taken here.

The rest of this draft was quite straight forward for Katsuhiro, each of the following picks being completed in less than 5 seconds.

So as we near the business end of the tournament can this super student continue his impressive performance? We will find out soon. Here is the deck he will be using to carry himself to the Top 8.