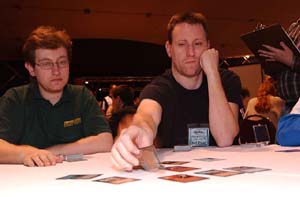 I sat down to chat with old school player Frank Gilson while he was constructing his deck for the second draft of the first day. I had watched the entire draft at his table and saw the following colors get drafted:

Me: How do you feel the draft went for you?
Frank: (Olivier) Ruel and his friend took a lot of cards that would have benefited me, but (Alex) Shvartsman buffered me. He didn't really have a choice of what colors to draft, so he ended up with Red/Green.

Me: So who ended up with the best deck at your table?
Frank: Alex, but he was missing a few key cards that would work in his deck, like (Reckless) Charges or (Muscle) Bursts.

Me: How is your deck compared to the other U/B deck at the table?
Frank: I have a lot more manipulation and flyers than him. He did end up with more removal, and a couple of bounce spells.

Me: So you think you'll do well at this table?
Frank: It really depends on who I get matched up against. I'm convinced I can go 2-1, as long as I don't play Alex until the last round.

(Frank then started making the final cuts to his deck. He mused out loud about whether he should play Last Rites, and Malevolent Awakening)

Frank: (Gestures to the Awakening). Normally this is a great card, but I don't have any of the cards it works well with, like Gravedigger or Chamber (of Manipulation). It's still really good, and I might play with it. (Puts Predict into his sideboard pile). I hate not to play this, but I don't have enough cards that need threshold.

Me: You seemed really happy to get your Dirty Wererat midway through the draft.
Frank: He's really key in my deck. He's great as an early defender, and can play offense late game.

Me: How do you feel your deck would be without the late (23rd pack) Aboshan you ended up with?
Frank: Obviously worse, it's a great card that can win me games. He really gives me a chance to win against Shvartsman if I can keep him on the board, but my deck does have a lot of flyers to win with already.

(At this point Frank cut the Rites of Refusal from his deck).

Frank: I was really looking for a Syncopate...

Me: But there were none at the table.
Frank: Exactly. Rites of Refusal isn't the best card, but normally I like running at least one Counterspell in my deck. But there weren't any high casting cost bombs at the table, like Overrun or Shower of Coals, so I don't really need it in my deck.

Me: So you used to be a member of PCL (Pacific Coast Legends), right?
Frank: Yup (laughs), that was a long time ago.

Me: Have you kept in touch with any of the old guys from the team?
Frank: Well, Preston (Poulter) is married and he just had a child. (Pauses) Well, I think he just had a child. He still plays casually every now and then. I haven't seen Mario (Robinia) in years, and (Mark) Chalice has been missing in action. He started working 60-80 hour weeks, and kept with it. I've only seen him twice in the past 3 years. And who knows where (Mark) Justice is. Oh yeah, Scott Johns still plays.

Me: I feel like we're missing someone.
Frank: Yeah, me too. (We forgot about Henry Stern, who of course is an employee of Wizards of the Coast). (Points to Blessed Orator and Mystic Zealot). These two are great, great white cards, and I started to go white when Ruel and his friend went black and blue, but the guy to my left started taking white, and I didn't think it was in our best interests to fight. These are excellent cards, and I feel bad not playing them, but it worked out best when I shipped him white and he took it.

Me: So with all these Looters and stall cards, do you feel you'll ever win a match at this table by decking your opponent?
Frank: (Thinks for a second). Maybe against the W/U deck or Ruel. We could get into a stall where the game would come down to killing each other's Looters and Brokers, and decking the opponent. But I think that I have a lot more flying creatures than anyone else at the table, so I shouldn't really end in a stall unless they get a lot of (Hallowed) Healers on the board.

Me: So do you think you could have drafted your deck differently?
Frank: I had an opportunity in the first pack to wheel two Red cards (Demoralize and Scorching Missile), but ended up making a statement to play Black and Blue by taking Innocent Blood and ... (Pauses).

Me: The (Laquatus's) Creativity.
Frank: Right. But it would have ended horribly for me, since Alex really didn't have a choice in colors except for Red and Green, and he would have been fighting me for Red the whole draft, which would have made both our decks awful.

(Frank then begins to make the final cuts to his deck, leaving the Awakening in).

Frank: I'm going to end up playing the Awakening, because even though I don't have many cards to use with it, I really want to be able to get my Aboshan back in the case that someone kills it. The mana works out really awkwardly in that case, but he's too powerful for me to afford to lose him.

Me: So if you could have had any common card in your colors that you didn't end up with, which would you want?
Frank: Ghastly Demise, absolutely. Right behind it would be either Repel or a couple of Aether Bursts. I didn't end up with any bounce.

Me: Well, I did notice that Dematerialize.
Frank: Yeah, I have that, but it's not an instant. There were so many Squirrel Nests in this draft, I think 4 (there were four), plus a ton of Beast Attacks and Elephant Ambushes, that it will really work as creature kill a lot of the time.

(Frank then finalizes his deck, which contains 24 cards and 16 lands).

Me: I notice you're playing 15 lands plus a Cabal Pit?
Frank: Yeah, I can count these 3 Peeks as land. (Laughs). Let's see, the average casting cost in my deck is (counts his cards briefly) around 3, so I can get away with running 16 lands between my cantrips and (Cephalid) Looters (of which he has two). Sometimes you'll have a Black/Blue deck with a lot of four casting cost cards, and you'll need 17 land, but even with those deck you end up land glutted a lot.

Me: Yeah, you can reach threshold easily with your deck, but there weren't many Black threshold cards in the draft, only one other Wererat and no Frightcrawlers.
Frank: I don't really like Frightcrawler in this type of deck. I wouldn't have taken one unless there are no other cards for me to take. I do like running it in Blue/White as the kill card though.

Me: In the slot where other players use Escape Artist usually to break a stalemate.
Frank: Exactly. White/Blue can easily get threshold, and Frightcrawler is a lot larger than the Artist. When I draft White/Blue, I like getting a couple of black cards like Ghastly Demise and Patriarch's Desire so I can take care of trouble creatures like Chainflinger. That guy can single-handedly destroy that (White/Blue) deck.

Me: Well, thank you for your time, and good luck! (I get up and shake his hand.)
Frank: Thank you.