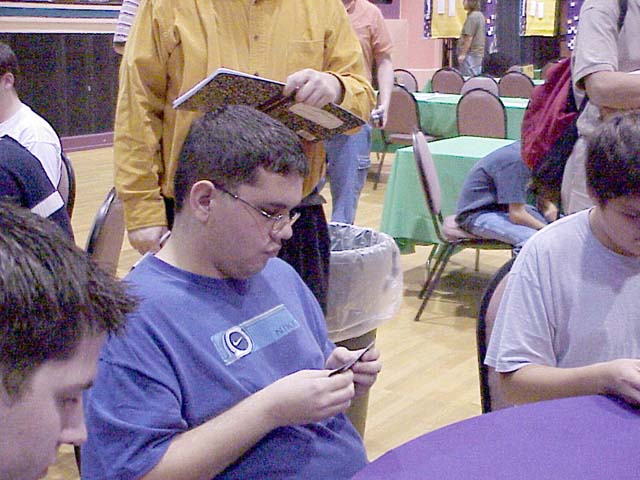 Frank Hernandezrank Hernandez, former member of the United States National Team, and Former Team Worlds Champion sat down to the final draft of the day needing a 3-0 to make top eight, and a 2-1 to at least make money here at Grand Prix: Tampa. Heading into the draft he wanted to make a build that featured black as a predominant color. Knowing what solid bombs are in Torment for the black drafter, he was willing to chance three to four other drafters in order to build what he wanted.

Frank cracked the first pack and was challenged with a pick between Roar of the Wurm and Stalking Bloodsucker. He struggled with the pick and eventually went with the huge vampire. He never looked back after that point.

He took Painbringer, and looked to settle into Blue Black with a third pick Aven Windreader. The hits kept on coming as he took a Dreamwinder over a Cabal Pit and Cephalid Coliseum. In the fifth pack Frank stared at the chance to go blue black splash white, but eventually took a Zombie Assassin over Kirtar's Desire and Second Thoughts. The next two picks seemed to make him BUW with Graceful Antelope (Over Kirtar's Desire and Filthy Cur) and Gallantry being his. A Dusk Imp, from his first pack, was quickly taken and the rest of the pack was highlighted by a ninth pick Innocent Blood, and a fourteenth Cephalid Coliseum.

Second pack he cracked another near mint bomb in Iridescent Angel. In the end he took a Dirty Wererat, and passed the chance to splash white in the draft. Execute was his next pick, and another third pick Aven Windreader rounded out his first three picks. A Dematerialize was taken over Last Rites, and in the sixth and seventh picks, he took two Morbid Hungers. An eighth pick Innocent Blood added more removal and the rest of this pack added nothing really amazing to the main deck.

Torment seemed to be really unkind to Frank. Cabal Torturer was a first pick for Hernandez, and the black quickly dried up after a second pick Crippling Fatigue. The blue however was kind enough to offer two Aquamoebas and Churning Eddy. Ghostly Wings and Obsessive search round out what may be a very solid deck.