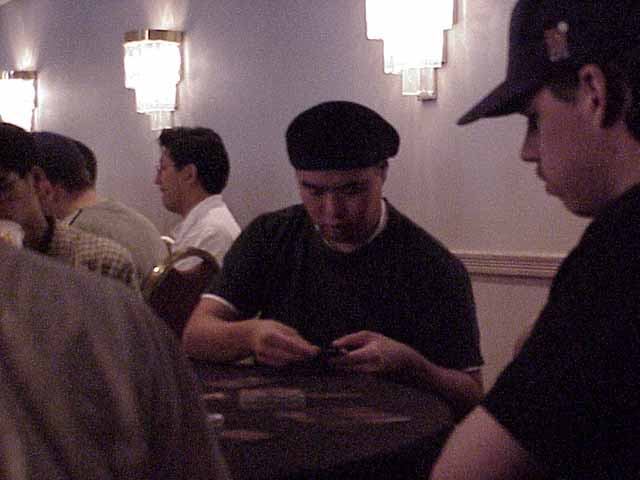 Gab Tsang, everyone's favorite Juggernaut, was able to go 3-0 in his last draft pod with a stellar green/white starring Jolrael, Empress of Beasts. For Gab to be sitting at the top table was no surprise to me, and it was also no shock that I wanted to do a draft analysis on him as well.

Gab started off opening a pack containing: Sever Soul, Shock Troops, Arrest and Rishadan Airship. Most people (along with myself) would have a hard time deciding which card to take, but Gab immediately took Rishadan Airship, showing a preference for blue. This seemed to pay off as Gab was passed Waterfront Bouncer. That pack also had another Sever Soul and Shock Troops to keep other people interested in colors other than blue. A Blockade Runner followed. Then Gab picked a Giant Caterpillar over a Dehydration, which felt right, but was also risky if Gerald Budzinski on Gab's left decided to take the Dehydration (which he did). Though risky, this would not turn out to be disaster since Nemesis blue is very poor. Gab wouldn't be losing out on much if Gerald decided to follow up on his Dehydration pick and Nemesis green has cards like Blastoderm, Treetop Bracers and Seal of Strength. Gab's next pick in Masques was a Snorting Gahr, a good indication that the player to his right, Roland Aw, was not playing green (little did Gab know, he was!). Things were looking decent for Gab, and he finished Masques with a Silverglade Pathfinder, Darting Merfolk and a Chambered Nautilus.

Disaster did strike for Gab in the Nemesis pack. Gab's opening pack didn't have any playable cards in Gab's colors so he first-picked a Rusting Golem, a subpar card at most. None of the Nemesis green that Gab was anticipating came: he saw no Blastoderms, no Treetop Bracers and only one Seal of Strength. He didn't even get to take the Seal of Strength because came there was a Nesting Worm in the same pack. He got a second Wurm three picks later. Gab did snatch a fifth pick Ensnare for his deck, but that was all for Nemesis. 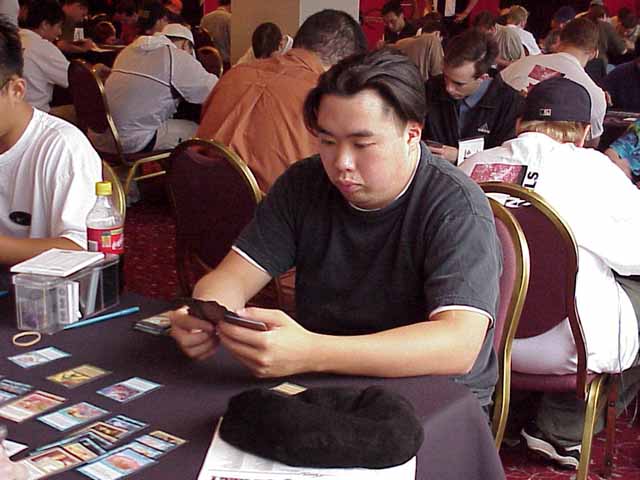 Prophecy proved to be the saving grace for Gab's deck. He snagged three Silt Crawlers, the best green common in Prophecy. That seemed really strange to me since Roland Aw, who was picking right before Gab, was also playing green. I asked Roland after the draft what he had taken over those two Silt Crawlers (Gab first-picked one). He took a Vintara Elephant over the first the first (Gab's 5th pick) and a Rib Cage Spider over the second (Gab's 8th pick). In my opinion, both those cards are vastly inferior to the Silt Crawlers. Gab also grabbed some much-needed evasion in the form of Avatar of Will, Stormwatch Eagle, Spiketail Hatchling and a Coastal Hornclaw. Thank heavens for Prophecy.

If the green/blue deck Gab drafted were in someone else's hands, I'd expect no better than a 2-1or 1-2 performance, but since I'm talking about the Juggernaut, I think I just watched the winner of the draft portion of Canadian Nationals 2000.