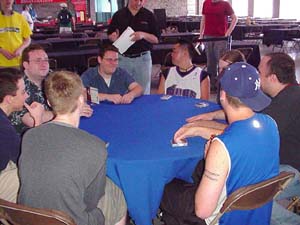 Three players in the draft were firmly u/w within a handful of picks. Two of them were Gary Wise and Gab Tsang who were sitting one seat apart. In between them sat Guillaume Daoust—being fed by Gab—who would be Gab's first round opponent since they were the only two players remaining with 6-0 records.

When Francis Cormier opened the first pack and he took a Skirk Commando leaving Gab to choose between Wirewood Savage and Snarling Undurak—the age old debate—and Gab took the Savage hoping that Guillaume would pick the beast. "I took it on the outside possibility that the guy next to me would take the Undurak." When asked which card he would have chosen without knowing who his opponent was going to be Gab was less sure of his pick. "I think I generally prefer this guy (Savage) but it is close. I had three Savages in my deck yesterday and it was RIDICULOUS!"

Gab quickly switched into blue when he opened an unexciting pack where the best card was Ascending Aven. He also felt confident in the way the draft was shaping up after the first two packs that he would be seeing more blue. "Francis opened and took Skirk Commando which is a pretty strong signal that he wants red—there were better cards. But the eighth guy took a Sage Aven over much better cards and he looked like he might go U/G, which would mean that Francis couldn't go U/R."

Unfortunately for Gab, Gary had taken a Mistform Dreamer and Skyreaver within his first three picks and was looking to white to round out his deck. "What really hurt me was when Gary went into white. It cost me a Stinger and some other cards I wanted. He and Elijah are pretty good friends I guess. Otherwise there is no reason for him not to go black there."

Interestingly, it turns out that Elijah went into black with Shepherd of Rot over Snarling Undurak to support Gab's first pick Savage. "I figured if there were five players between Gab and the next green drafter he would be set up to get all the Timberwatch Elves in Legions. He's 6-0 , so..."

Gab's deck does have three Dragon Scales, which should power up his deck. While he was registering his deck he shouted over to Elijah's 2020 teammate David Rood, "Dawn Elemental or Dragon Scales?" Rood was unequivocal, "Dragon Scales!" Gab laughed, "Josh is such a rare drafter! He took Dawn Elemental over it."

Rood was unimpressed with Josh's choice, "Trust me!"

Gab: "I did trust you. I took them over everything." 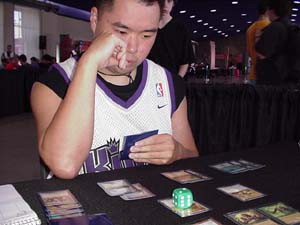 "Since I haven't played much with Scourge I am relying on my teammates. A lot of decisions were made before the draft even started." Gab also knew before the draft started that he would be passing cards to his first round opponent. "That's really not fair that I was feeding him—even if I didn't take advantage of it as much as I could have. I did steal a Crested Craghorn and two Vigilantes from him."

It did not look like Gary had much of a deck until the third pack when he managed to grab only blue and white cards with all fifteen picks—11 or 12 of them are playable. One card that he snagged is going in his sideboard and is sure to arch some eyebrows. "They are all going to say I'm nuts. This is an unusual choice," pointing to the main deck Dawning Purist and the Wing Shards in his sideboard. "He is my only enchantment kill, plus he is a cheap morph. I only have four morphs for my Aven Farseers. Don't get me wrong—I am bringing it in out of the sideboard. I just don't think the card is as good as people say. I don't have any cheap spells to optimize it—I'm just going to get their worst attacker. Granted I have not drafted Scourge very much so I could be undervaluing it."

Gary also picked a Keeneye Aven over a Wingbeat Warrior, which sent a murmur through the onlookers. Gary defended the choice by pointing out that he had no fliers to contend with either Gab's or Josh's larger fliers.

If I had to predict who was going to win the table I would pick Elijah Pollack. He had black all to himself for the early part of the draft and he has a ridiculously fast mono-black zombie deck with an Undead Warchief.

The full list of picks in the draft is available here.