Gary Wise and Mike Turian—teammates on the Pro Tour winning Potato Nation—both need to go 3-0 in order to make the Top 8. Only one player form their pod can advance and the former teammates found themselves in seat one and eight as the draft got underway. 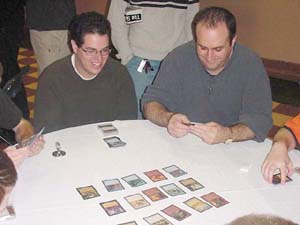 Gary went immediately into white, choosing Pacifism over Snarling Undorak, Swat, and Chain of Plasma. Mike took a Mistform Dreamer and Crown of Suspicions on the wheel. In the second pack—which opened on a Silklash Spider—Turian took a Haunted Cadaver and a Misery Charm on the bounce while Gary took a Wave of Indifference and a cycling card on the wheel.

The third pack opened with a first pick Nantuko Husk and then Contested Cliffs. Turian seemed content to be the only blue mage at the table—is that the lot of the eighth seat? —and took a Screaming Seahawk. Gary took an Akroma's Blessing and got a Daru Cavalier on the way back—this would become a habit for Gary.

Matt Severa's started to emerge as the early front-runner in the pod when he opened Centaur Glade for his G/R deck. Turian remained the only blue mage and took a Fleeting Aven while Gary nabbed a late Goblin Sledder and a Goblin Piledriver on the flip side. Gary's nearest competitor for white cards? Pat Sullivan—four seats away!

Sullivan's B/W was coming together nicely and he opened a Smother that required little thought. Turian took a Fallen Cleric and Wise was able to pick up a fairly late Gustcloak Harrier with a Gustcloak Runner on the flip side.

Sonmez opened a Sparksmith that Gary looked at longingly but it was not to be as Sonmez nabbed it giving Manning Voice of the Woods and Turian a Severed Legion. Gary consoled himself with a Dive Bomber. The seventh pack plopped a second pick Nantuko Husk into Turian's lap and Gary picked up Crude Ramparts and Renewed Faith. Turian first picked a Voidmage Prodigy to close out the first eight packs and Gary nabbed a Shock over Avarix, which found its way into Severa's beastly pile of cards.

The next set of packs reversed directions and Turian scooped up a Swat. Manning took a Jareth with the second pick over a Wirewood Savage. With two Undoraks and a Voice of the Woods already under his belt the Savage seemed like a sure bet for the YMGer. Foothill Guide and a random Complicate comprised Gary's wheel. The Savage ended up going seventh. Severa chose a Mauler over it for his deck. 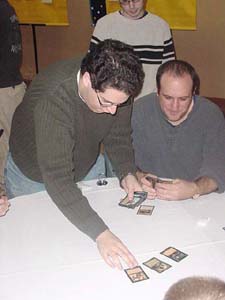 The ninth pack yielded a Unified Strike for Gary and a Mistform Stalker and Fallen Cleric for Turian on the wheel. Gary took a Pearlspear Courier in the next pack while Turian took Read the Runes with a bounced Mistform Wall. Gary got another Daru Cavalier on the way back. Sullivan took a Dive Bomber out of his pack but there was still an Improvised Armor for Gary. Turian took a Festering Goblin and got a Frightshroud Courier on the bounce. Gary happily took a Daru Healer the long way back.

Matt Severa's deck took a turn for the frightening with a first pick Gratuitous Violence. Wise and Turian took a Pacifism and a Festering Goblin respectively. Wise found nothing better than a Foothill Guide in the next pack and Turian took a Thrashing Mudspawn. Wise woke up X-mas morning and found a second pick Slice and Dice under his tree. Turian nabbed a Tribal Golem to compliment his Mistform men. Wise closed out the second set of packs with a nigh unkillable Tephraderm while Turian took a Dirge of Dread.

Christmas turned into an eight day Chanukah celebration for Wise when he opened up a Jareth to start the final round of packs. Turian wheeled a second Seahawk and a Wretched Anurid. Somewhere in the last eight packs Dan Rodemann emerged as the other blue drafter a the table and picked up a pick one Callous Oppressor that would surely have made it to Turian otherwise. Turian took another Dirge of Dread and a Mistform Wall while Gary wheeled his third Daru Cavalier and a Secluded Steppe.

Fabiano first picked a Lavamancer's Skills out of a very good pack. Severa finally got the Wirewood Savage his deck was pining for, Sully took a Mobilization and Sonmez took a Gourna. Turian was excited to grab a Riptide Biologist and a Barren Moor while Gary grinned at Sully as he picked up a Dawning Purist.

Severa picked up gratuitous Gratuitous Violence—his second! Turian snatched a Screeching Buzzard to go with his Screaming Seahawks and Wise picked up the Avarix he missed earlier. Nothing else exciting happened until the final three packs when Wise picked up a twelfth pick Cavalier—his fourth!—and Sparksmiths in the last two packs! His deck went form good to formidable in the final two packs.

I sat down with Turian as he spread out his cards.

Turian: "The only guy that could possibly open a Callous Oppressor and have it not end up my deck. I was so mad, I wanted that guy!"

He seemed pretty happy with his Read the Runes as he examined the possibilities of using the card with his multiple Festering Goblins. "This card is a bomb", he nodded seeing its potential more clearly with his cards out in front of him. Apparently he regretted one pick, which might come as a surprise to most readers. He tried to bounce an Imagecrafter over a Severed Legion but the 1/1 wizard did not come back to him. Had he to do it all over again, Turian claims he would pick the wizard. 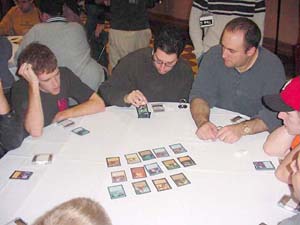 I asked him bout his chances to 3-0 the table and he seemed confident that he had the best deck. He conceded that Wise's deck was also quite good, "We cooperated really well together."

When I asked Wise how he felt about his deck he could only laugh maniacally and show off his pack 23 and pack 24 Sparksmiths. "I think I got the most powerful deck at the table!" With the exception of his own he felt that Severa's deck had the best chance to run the table. "I really wanted a Demystify but it just wasn't there." He is running the Dawning Purist in case he has to face the Gratuitous Violence.dec. As I walked away he was still cackling, "I have a Slice and Dice with FOUR Daru Cavaliers!"

I also had the chance to ask Manning about his choice of Jareth over Wirewood Savage. He could only shake his head and show me an Elvish Pathfinder he had to play in his deck alongside TWO Voice of the Woods! "I think I overestimated Jareth and underestimated the Savage. I'm not even playing with him."

In the end I think that both Wise and Turian have a good shot at the Top 8 but if you are looking for a dark horse candidate keep an eye out for Matt Severa.