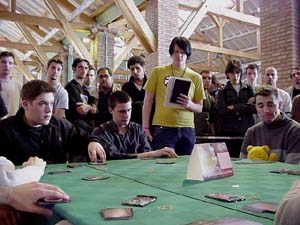 When I found Jelger he had already made two picks: Dirty Wererat and Ember Beast. But I could follow him from the third booster on. His third pick was Aven Cloudchaser over Rabid Elephant, Sandstone Deadfall and Krosan Avenger. So he's choosing between three colors now. He then picked Crypt Creeper over Mad Dog and Halberdier over Second Thoughts or Morgue Theft. He went on to pick Bloodcurdler over Aven Archer before the picks became easier and he picked Embolden, Angelic Wall, Aven Flock and some other cards.

So going in to pack two, it seems that Jelger is going to be playing some combination of red, black and white.

In pack two he opened up Ghastly Demise, Patriarch's Desire, Hallowed Healer and Flame Burst. He picked the Desire. After the draft I asked him why he picked the Desire over the Demise. He said he was thinking about going black-white and then the Desire would be nice if he got some Auramancers. He got passed a Wererat and a Wererat and another Wererat. Then he picked Thermal Blast over Gravedigger. He seemed to turn to black-red, maybe with a white splash. The last meaningful picks were Ember Beast, Execute, Blazing Salvo and Mad Dog.

Going in to pack three, the focus was more on black-red.

His first Torment pack was lousy and his only option really was Gloomdrifter. Things only got worse from there on in the later packs. He second picked Mesmeric Fiend over Pardic Arsonist and got a Waste Away third pick. Then he got Temporal Insanity and an Outcast. His sixth pick was an Unhinge. But there was still a Compulsion in that pack somewhere. Jelger kept picking cards like Gouger, Unhinge and Crackling Club. His last pick wasn't Dark Ritual but someone, somewhere must have thought it almost was. And that's about it.

After the draft, during deck construction, Jelger said he wasn't very happy with the deck but that maybe he could go 1-2 with it. Then he looked at it again and said he even might be able to go 2-1 with some luck. He has four Rats. They can be nasty.