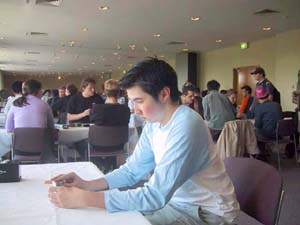 The top draft table this year featured many known players as you would expect for a 3-0 table at nationals. Coming into the draft Connolly had drafted one of the most insane R/G decks ever which had even carried him to a 4th turn kill in his final game after a Rites for 6. Rod Ho on the other hand had piloted what looked to be a sup par R/U deck to a fine 3-0 result, and was looking to finish on a strong note leaving him in perfect position to make a charge at the top 8.

When the two players opened their first packs of the draft the two expressions were completely different. Ho was forced to settle for a first pick Reckless Charge, while Connolly faced a tough decision. He opened Cultural Exchange and Morbid Hunger and took some time deciding on which card he would like to begin his draft with. After some deliberation he decided that the Hunger would be a much better first pick and was rewarded when his second pick of the draft was a Caustic Tar. Ho removed a Cephalid Looter from his pack making the post-draft reflection on the first pick for Connolly easier. However the draft went downhill quickly for Ho, taking a Pradic Firecat, a Shelter and a Mystic Visionary from his next 3 picks in a Ben Seckesque draft style. Connolly on the other hand picked up a Nantuko Disciple, giving him the chance to move into green, a Zombie Assassin but it was a Pianna Nomad Captain that decided he would be going B/W. He continued drafting this deck type with a Whispering Shade, Embolden and was also rewarded with two late Sacrifice Lands, a Nomad Outpost and Bog Wreckage. Cloudchaser Eagle, Blazing Salvo and an Embolden rounded out the first draft picks of Ho.

Upon opening the second pack Connolly was once again greeted with a tough decision, as he saw before him Caustic Tar, Gravedigger and Chain Flinger. He thought long and hard about taking the Chain Flinger and moving into red but he decided against it, opting for the Gravedigger. Ho was also making a tough decision of his own, faced with a choice between Flame Burst and Ember Beast, in the end he decided on the latter. Ho then took the Flinger that Connolly had been thinking about and took another Embolden on his next pick but once again his draft was going on a downward slide. With Connolly taking whatever good white he could fine and very few red cards sliding his way he was quickly worrying if he was going to make a deck that could prevent him from doing the 3-0 0-3 turn around. Connolly's deck on the other hand was improving, despite the lack of removal that was coming his way. He grapped a Mystic Zealot, a second Pianna, a Hallowed Healer and a Mystic Visionary totally shutting out Ho for white.

Moving into the final packs of Torment Ho needed something special to happen and starting the draft with a Fiery Temper wasn't a bad way to begin. He had to pass a Possessed Nomad and Connolly was more than happy to snap it up as his second pick to go with an Organ Grinder that was his first pack out of a weak pack. Connolly picked up more cards in the form of Soul Scourge, Waste Away and Teroh's Faithful. Ho also wasn't too displeased with his picks netting another Fiery Temper a Petrovak and a Mystic Familiar. The two slowly rounded out their decks with fillers and Connolly picked up a late Tainted Field to help him with his mana base.

Overall the two drafted well but were unlucky with the cardsets that were around their side of the table. Connolly had no real choice with his deck as he saw absolutely no playable blue cards after his first pick choice between Cultural Exchange and Morbid Hunger. Ho was in the same boat, seeing little to no green cards that would have been a nice complement to his red start. His draft could have been different had he taken the Caustic Tar over the Reckless Charge and taken it upon himself to be the Black Mage of the two drafters.