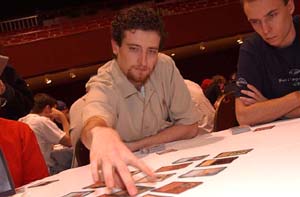 Jon came into the draft with a 2-2 record, and hoping to draft something amazing to catapult him into day two. All the players at this table carried the same hope. Unfortunately, there were no real broken rares drafted, and there was some miscommunication between drafters, which compromised the integrity of a few decks, if not all.

Here's how the table looked:

I'm going to now list the picks that Jon made numbered by pack, then by what his pick was. After that, I'll list the cards that Jon put in his deck.

As you can see, Jon declared himself a Green-Red mage very early to the table. However, as the packs unfolded, he was deprived of the overly powerful cards that the whole table was hoping for. As you can see in pack 3, the pack that Jon opened, there was a drought in green and red cards, so an "ok" pick was taken.

Yes folks, Jon's second pack was also devoid of anything worthwhile, and he had to first pick another Diligent Farmhand. As he opened this pack, I looked around the table, and there were head-shakes and looks of pity as Jon had to reach for his first pick.

Deep into the first round of packs, Players 1 & 2 started fighting over Red, and then later fighting over a little Green. This hurt Jon's deck a great deal I think, but if only one of those players stuck to Red-Green, I believe Jon would have had a better cardpool. Kurt Hahn at seed 6 drafted three Elephant Ambushes and other very powerful green spells, depriving Jon of that color when the draft was going counter-clockwise. The packs were unbalanced, though: The ones that Jon opened didn't have any substance for him, and those that the people next to him opened had little substance as well. Any of the good cards that got passed to Jon got passed three or four at a time, where he wouldn't see the other cards again because others were snatch them up before they got back around to him.

These problems were not under his control, however, it was just the luck of the draw. The choice of going into Green-Red was the only one he could make from the position he was given, and Lady Luck seemed to not turn her smile on him for this draft.

Now lets filter out all the junk and list what is actually in Jon's deck: