In the first draft today, Kai had an insane Green-White deck. He was at a table with plenty of other good players including Gary Wise and Antoine Ruel but they were intent on fighting on Red, Black and Blue along with everybody else on the table, and Kai was rewarded with a deck with Cloaks, Fleetfoot Panthers, and other goodies. 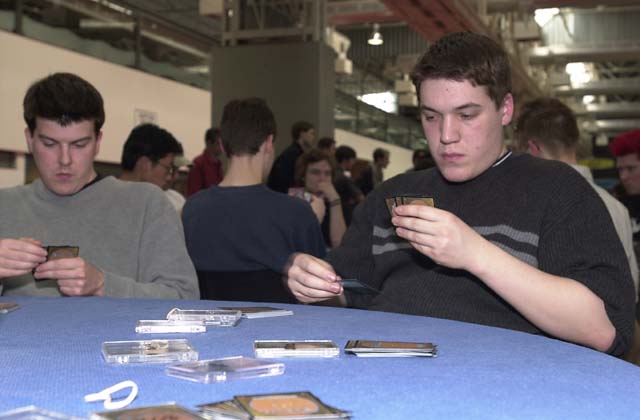 Kai was drafting between his countrymen, Patrick Mello and Janosch Kuhn. He had a lot of success with Green in the first draft, and so he must have been tempted to take the Kavu Titan. Perhaps he knew something about Mello's color preferences and in any case, he favors Black-Blue to every other combination on Netdraft, so he took the Probe. Mello took a Trench Wurm but then a Soul Burn over Recoil so at least Blue was free. Kai got a second pick Distorting Wake and then took Stormscape Apprentice over Recoil.

At this point Kai was considering whether he could go Blue-White and splash Black at this point in case the Black dried up quickly. This seemed to be the case for Patrick Mello as there was no really good card in Black-Red in his next pack and he took Pincer Spider.

Kai now had to choose between Slinking Serpent - the only halfway decent card in his color in the pack, and Thicket Elemental. If Kai had picked the Elemental at this point he might have been in trouble, as Patrick had just switched to Green, and he wisely stuck to his guns, taking the Serpent.

As the first booster evolved Mello switched further into Red-Green, and Kai was in the right colors - Blue-White-Black. He was rewarded for this by a late (eighth) pick Duskwalker, and a ninth pick Plague Spores which it was possible to splash into his deck. Patrick's decision to switch into the underdrafted colors was also a good one since he was the grateful recipient of late pick Yavimaya Barbarian, and Explosive Growth.

Kai's deck didn't seem that good after the first set of boosters apart from his first two picks. On his first pick in the second pack he had to choose between Zanam Djinn and Do or Die. He took the creature and then picked Repulse (over Exclude), before making what many would see as a dubious pick. He took a Recoil over Armored Guardian, and later explained "In the first set of packs I had seen only one decent white card - an Acolyte, and the Guardian is only good if you are playing a lot of Plains, so I took the Recoil."

If he had taken the Guardian here his final deck would have been much better, but that is with the benefit of hindsight, and his argument certainly makes sense. The remaining cards in the second booster were not kind to him. He got a Metathran Zombie, a Metathran Transport, and a pair of Opts, hardly what one would call great cards.

He needed a lot of help from Planeshift to make a good deck, but he wasn't helped out by his first pack in which the best card was Marsh Crocodile. He then picked up a Silver Drake, and a Cavern Harpy, before his decision not to take the Armored Guardian came back to haunt him. He was passed a fourth booster containing Lashknife Barrier, Hobble, Dromar's Charm, and Phyrexian Bloodstock. Still unsure whether he was going to play White or splash for Plague Spores, he took the Bloodstock - clearly the worst card out of the four.

Then he was again passed a booster containing Bloodstock and Lashknife Barrier, this time his reasoning was that he had enough random creatures, and could afford to take the Barrier. He picked up another Silver Drake and a Sea Snidd to round off his draft.

The absence of any good White cards in the first set of packs really hurt Kai, as it sent him a false signal that people were drafting White whereas in fact that color was not being drafted to either side of him. A Blue-White deck splashing Black would have been much better than what he eventually ended up playing.