OK so here's the scenario. You've played a blinder and you're lying in tenth place going into the final draft. You know you need a minimum of 2-1 to make the top eight. After building your deck with the best cards available to you this is the list you come up with. The question is would you feel comfortable of your chances?


If you're anyone except Kai Budde then probably not and he wasn't particularly happy either.

"The best player in the worldÔ" opened a Dirty Wererat, Aether Burst and Balshan Griffen in the first Odyssey pack and chose the large flyer. Big and blue with evasion is good we hear. Then pack two offered Patriarch's Desire, Firebolt, Zombify, Springing Tiger and Roar of the Wurm. Assuming, correctly, that his neighbour was drafting blue Budde took the big Wurm and looked forward to some good green coming his way. Pack three offered nothing but Nimble Mongoose and Diligent Farmhand and he took the Farmhand to solve any later mana problems. A fourth pick Hallowed Healer suggested that white may come from the right and so Budde moved into white taking the Healer over a Krosan Archer and following up with Kirtar's Desire and Mystic Visionary. The final eight picks could only muster a Cartographer for the main deck although it was interesting to see the Nimble Mongoose come all the way around the table, conclusive proof that good quality constructed and limited cards aren't always the same. 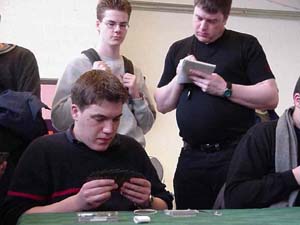 Kai BuddeBooster two was awful and Budde drafted a Repel as there wasn't anything else. The next six picks were Aven Fisher, Metamorphic Wurm, Krosan Avenger, Bomb Squad, Shelter and Skycloud Egg all of which made the main deck. Hmmm U/G/w/r that should be a stable mana base! The Rites of Spring and Timberland Ruins that came late in the draft seemed sensible picks to shore up the mana of this four colour monstrosity, although with only them a Diligent Farmhand and the artifact egg they may have their work cut out.

Torment isn't known for it's green creatures and so when Budde has to draft seven green creatures from the final booster you know things haven't gone well. Two Basking Rootwallas, Acorn Harvest, Centaur Veteran, Krosan Restorer and Nantuko Blightcutter were joined by a second pick Possessed Aven which had been passed from the right by Gabriel Nassif of France who ended up playing a B/W/u deck. Ghostly wings and Circular Logic were the only other maindeck Torment cards.

Talking about the draft during deck construction Budde told friends that Nassif took blue cards but there wasn't anything decent left afterwards.

The initial build attempt was for straight G/U/w with a fairly good mana curve which looked interesting but suffered from a distinct lack of bombs. There was a good long pause at this point as the German stared at his sixteen creatures and six spells. He picked up the Ghostly Wings and Churning Eddy and tried those for size but with construction time running down he looked up at me and said "Four colours or no that is the question!". Yes was the eventual answer as he binned the Eddy and added the Bomb Squad. As he got up to get his land he said "Heres hoping I play lots of U/W and can kill them with the Bomb Squad" so I wished him good luck and he replied "Thank you, I'll need it."

So there you have it. Kai Budde, a not very good draft deck and a competition with some of the best European Magic players. Maybe an unsurmountable obstacle? As I write this he's won his first two games of the draft and should be able to ID into top eight. Quite outstanding.