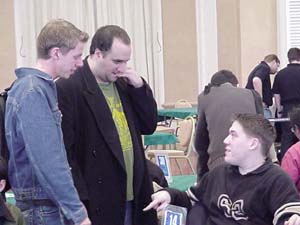 Between rounds, Kai seems relaxed. And why shouldn't he?

If the first table of the day is all about being nervous and sleepy, the second one is all about your score. If you are doing well, on the verge of intentional drawing into the Top 8, you expect to get a relaxed draft while the tables where players need a 3-0 get very, very tense. And then you have the last tables were some players just want to grab all the rares and drop while others want to fight up the standings to minimize the damage.

This time around I'm refusing to give Kai Budde any nicknames. He is just Kai. In fact in some places people are starting to refer to a brilliant, and constant, performance with "Kai" as an adjective, as some once called a shady play or situation a "Long moment".

Anyway, Kai walks up to the table and sits between Spanish Moranitos and Alexis Dumay from France. On the right side of Alexis is Ryan Fuller while across the table you have Joost Vollebregt and Alexander Witt.

The draft started off with fairly big signs from Kai: he took the only two white cards in the first pack and two good black cards in the second pack. Most people would see that as a pretty good sign of what colors you want to draft. Well, Moranitos (in a repeat performance of his last draft table) took that as a sign of what HE should draft.

So for the next few packs he took Kai's lead by drafting black and white. It might seem a good move if you take into account that the only two other guys drafting black are the player downriver from you and the one right across the table. You have three players passing you the cards in your colors.

On the other hand it isn't very nice to the guy right behind you (who probably already picks colors to stay away from yours) and can wreak havoc in the table. Here one of the basic rules of drafting kicked in: the guy upriver runs the show. Kai was forced to change colors. Looking around the table and the next packs, he figured he could get some decent green.

The only person that could possibly be affected by this directly would be Ryan Fuller two seats down, who was taking green-white. In the middle sat Alexis Dumay drafting red-blue. So Kai switched to green and everything seemed to calm down. For about five split seconds. Because Dumay figured that if Kai was dropping white he might as well jump into that bandwagon and move to blue-white with Moranitos' leftovers.

As you can imagine this didn't actually please Ryan Fuller. The trouble was already rippling through half the table: Moranitos, Budde, Dumay and Fuller. Thankfully for the guys next to him Fuller knew what he was doing, and he had drafted in Moranitos' table in the previous draft. He held his ground and waited for the storm to pass.

Eventually Moranitos and Dumay calmed down, the Spanish even going back to red for a while, and Budde was able to draft a consistent green-black deck. He only needs one win out of it and he might get it very easily in a table where some players showed their inexperience with Odyssey drafting.

1 Call of the Herd 1 Rites of Spring