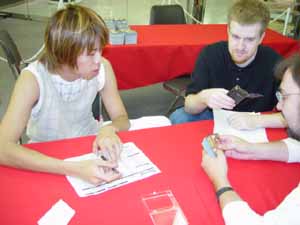 Katsuhiro Mori is one of Japan’s most well known players, especially due to his playstyle. Mori will often take only a few seconds per turn, at a blinding speed that mesmerizes both opponents and spectators. However, he’s much more than a flashy player. The former Rookie of the Year has had a great deal of success, including a ninth place finish at Worlds in 2001, and a recent Masters victory at Venice with his PS2 team. Mori’s success has continued this weekend, as he finished yesterday with a 5-1 record. With a good solid performance today, “Morikatsu” will play tomorrow for a chance to be on the Japanese National Team at Worlds- an honor he has yet to achieve in his career.

Makihito Mihara opened the first pack, and it was a good one. It contained Pacifism, Solar Blast, Festering Goblin, Catapult Squad, Aven Soulgazer, Snarling Undorak and Wirewood Elf. Mihara took the Pacifism, Yasunori Baba drafted Solar Blast and Kazuya Hirabayashi picked Catapult Squad. With a white player to his right and no one declared as a green mage, Mori gladly took Snarling Undorak. Wirewood Elf was the only other good green card in the pack, and it was picked up far away from Mori by Osamu Fujita in the eight seat. Akihiro Takakuwa was to the left of Mori and established himself as a black drafter, which meant that Mori would likely go into red as his support color. He was given a good reason to, as he gladly drafted Tephraderm. Unfortunately, Baba was one seat away to Mori’s right, and was red/green as well. Still, it didn’t stop Mori from getting good picks in Onslaught as he got Venomspout Brackus, a pair of Skirk Commandos and Battering Craghorn. At one point, Takakuwa opened his pack, and could have easily taken Sparksmith since he was only black. However, he didn’t want to fight over red with Mori, so he took Dirge of Dread and sent the Sparksmith to Kazumasa Shiki.

In Legions, Mori picked up the usual assortment of high quality monsters. A pair of Needleshot Gournas gave him a way to block off the air, while Rockshard Elemental and Brontotherium provided additional muscle on offense. Mori took Goblin Clearcutter over Elvish Soultiller to accelerate out his beasts faster, and drafted Nantuko Vigilante over Flamewave Invoker. Once Scourge came around, things got a little bit odd. Everything seemed normal as Mori drafted Accelerated Mutation and Carbonize, but then he decided to take Soul Collector over Krosan Drover and Accelerated Mutation. He was already committed to green/red, and drafting the Collector meant hate drafting a great card from Takakuwa, who had passed on Sparksmith earlier to prevent a fight with his neighbors. Through the rest of Scourge, Mori drafted two Aven Liberators and Dragon Stalker, and also got a fifth pick Decree of Annihilation.

Sideboard: How do you think it went?

Mori: I think I screwed up.

Mori: I have no removal. I’ve only got one or two removal cards, and the rest is just creatures.

Sideboard: What do you think you could have done differently?

Mori: I’m not really thinking too much about the mistakes I made. It’s more like it just happened.

Sideboard: So is it just a matter of the cards not going in your favor?

Mori: Yeah. It’s not that I made any mistakes necessarily, I just wasn’t able to get the cards to build what I think is a good deck.

Sideboard: I noticed that Yasunori Baba was two seats over to your right, and he was also red/green, so he was in a position to cut cards off from you. Do you think that contributed at all to the problems you had?

Sideboard: I noticed that you took Goblin Clearcutter over Elvish Soultiller. Do you just think it’s a better card?

Mori: Normally I’d take the 5/4, and I was thinking about which one to take for a while, but I decided that a 3/3 for four mana was better for the deck than a 5/4 for five mana.

Sideboard: So it was a mana curve issue then.

Sideboard: Did you take Nantuko Vigilante over Flamewave Invoker because of all the enchantments in Scourge? I think that before Scourge, most players would have valued the Invoker higher.

Mori: Since I’m red/green, I’m more concerned about things like Pacifism. Cards like that and Sandskin are able to take out green’s most aggressive creatures. It’s as good as removal against my deck to Pacify a Spitting Gourna.

Sideboard: I also noticed that you started hate drafting a lot of cards in Scourge.

Mori: Actually, the two Aven Liberators and Dragon Stalker I can splash in my deck. They’re strong cards, and they’re splashable.

Sideboard: So you’re definitely going to play three colors then?

Sideboard: You also took Soul Collector when there was still a Krosan Drover and Accelerated Mutation in the pack. That seemed like a pretty harsh hatedraft, and Kazuya Hirabayashi who was next to you was drafting black and didn’t seem too happy about it.

Mori: I was thinking that I might be able to go into black if removal spells showed up. I was definitely green, but with enough green cards I could have gone green/black instead.

Sideboard: That’s odd to me because you had a lot of red cards at that point. I suppose you could pick up land cyclers, but even then it’s hard to splash Soul Collector because the morph cost is so dedicated.

At this point, Kenji Matsui of Japanese Sideboard points out that on the first draft of day two at Nice, Mori did the same thing. He ended up with a four color deck, going for all the strong cards and was able to make it work. This is a part of Mori’s unique playstyle: he puts overall card power over mana consistency.

Sideboard: Still, it seems odd to me to take Soul Collector when you’re already solidly in two colors.

Mori: When I went for Soul Collector, I wasn’t thinking that I’d go green/red splash black, but green/black splash red. I was shifting course in the third pack. I picked up a Crown of Suspicion in Onslaught, so I was thinking that I could maybe throw some black in, which would give me access to removal spells, and some really good cards like the Soul Collector. Also, there were only three other people at the table drafting black, so I was hoping to get some good Scourge black.

Sideboard: Is there anything at the table that you’re particularly concerned about?

Mori: I’m afraid of Hirabayashi’s blue/white deck. If I get paired up against him I’m fairly certain I’ll lose.

Sideboard: How do you think you’ll do with this deck?

Mori: As someone else said yesterday (Masashiro Kuroda, who ended up going 3-0 with his draft deck), I’ll probably be able to get one win out of it. Two is a stretch.

Sideboard: We saw how that prediction worked out yesterday.