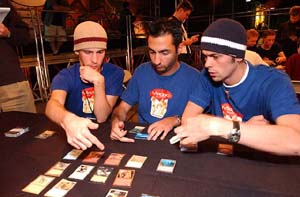 Norway and France are two of the top Magic-playing countries in Europe, and many of the teams from those countries are having success here in Boston. Two of those teams – Plan 9 from Outland and Magic Mushrooms – are facing off here in Round 8.

Plan 9 is Sigurd Eskeland, Oyvind Odegaard, and Endre Skjetne. Eskeland and Odegaard have played together in this event for three years, but this is the first time they've made Day 2.

Magic Mushrooms is Franck Canu, Raphael Levy, and Christophe Haim. Levy and Canu finished 12th at this event last year, but this time traded in Wilfried Ranque for Haim who has proven himself this year.

As the draft began, Levy palmed a credit card which he used to covertly "point" at cards on the table by pointing to corresponding positions on the credit card. This way, Outland had no way of knowing what the Mushrooms were going to take until they actually drafted.

Levy started into white in the B seat with a Shelter, shipping a Springing Tiger to Haim. Outland took three black cards – Dirty Wererat, Afflict, and Ghastly Demise – and Canu ended up with Devoted Caretaker.

Haim busted the bomb Overrun with his pack, passing Savage Firecat, Elephant Ambush, and Puppeteer to Skjetne, Odegaard, and Eskeland respectively. Canu took a Hallowed Healer and an Aether Burst, looking to go white/blue in A, and Levy wheeled Afflict and Skeletal Scrying.

Outland opened Patriarch's Desire, Wild Mongrel, and Mystic Zealot; Skjetne stayed in black, Odegaard in green, and Eskeland in blue/white. Canu took Angelic Wall, Levy a Morgue Theft and Mirari, and Haim wheeled Springing Tiger and Muscle Burst. Canu ended up with a Crashing Centaur that no one else wanted.

Odegaard's second color was decided when he cracked Shower of Coals. Eskeland got an Aven Windreader out of it, and the Mushrooms took Patrol Hound, Dirty Wererat, and a Chainflinger that Haim ended up not playing.

The last few packs of Odyssey were nothing special, except for Canu getting a second Crashing Centaur.

Going into Torment, Skjetne was B/r, Odegaard G/r, and Eskeland U/W. Canu was W/x (currently X was looking more green than blue), Levy was B/x, and Haim was G/u.

In Torment, Skjetne was hoping to abandon red for green because he didn't want to fight with Odegaard over the thin red. But when Eskeland opened Possessed Barbarian, Odegaard insisted that Skjetne take it. Skjetne ended up taking a Faceless Butcher in the next pack, passing Pardic Collaborator to Levy. Odegaard didn't think Levy was going to be red, so he thought nothing of it at the time, but it was a definitive pick for Levy's deck.

Canu cemented himself in white/green by taking an Anurid Scavenger, a Basking Rootwalla, and later a Possessed Centaur, which made the fact that Skjetne opened a Grotesque Hybrid sting all that much more. The Hybrid can single-handedly beat Canu.

Levy continued to take red cards like Temporary Insanity, and he opened a Mutilate in the last Torment pack. Odegaard wasn't thrilled.

Judgment began with Levy opening a pack containing Phantom Centaur and Anurid Brushhopper. Haim took the Centaur, and Outland wasn't sure what to do with the 'Hopper. Eventually Odegaard settled on it, and planned to play at least 3 colors. 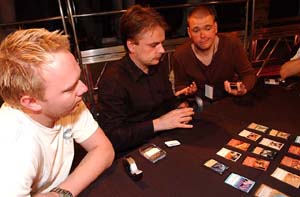 Eskeland's deck came together well in Judgment with two Wormfang Crabs, two Vigilant Sentries, a Chastise, and a Battlewise Aven. He must have forgotten about the Overrun in Haim's deck, however, as he never took an Envelop. He never opened a Prismatic Strands, either, which would have helped greatly. Also, he took the Battlewise Aven over a Shieldmage Advocate, which he later said was a mistake.

Skjetne didn't get much for his black/red deck, just an Arcane Teachings, and Ember Shot, and some 2/2's. Odegaard picked up a few more good creatures and two Sudden Strengths, plus a Krosan Verge and Riftstone Portal to help him cast the Brushhopper.

Haim's big pickups were a Wormfang Drake and a Lost in Thought, plus a gift Keep Watch that combos well with his two Acorn Harvests. Levy got a Masked Gorgon (not great against Odegaard), and Anger, and some other random guys. Canu made out well with an Elephant Guide, an Unquestioned Authority, and a few fliers.

After the draft, Outland felt like they weren't the favorites. Eskeland felt it would come down to his match with Haim, which he figured he could win (his tone indicated that he probably had forgotten about Overrun). Skjetne expected to lose to Canu because he didn't have enough creatures, and Odegaard expected to win.

On the other side, Canu really felt like he was going to lose (both A players were not confident, probably because Canu's switch into white/green meant they'd be playing a matchup neither understood). Levy was shaky and expected to lose, but Haim was sure he could beat Sigurd. (Both C players expected to win. Is white/blue better than blue/green? The debate rages on.) I put Outland on winning just because white/green is not a good deck, especially against a deck featuring Grotesque Hybrid. Haim will win, Levy will lose, and Canu will lose, giving the match to Plan 9 from Outland.