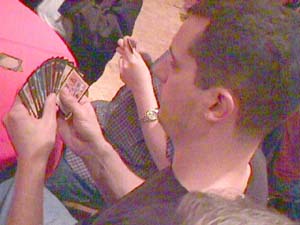 Six of the eight players at table three are still mathematically in contention for the Top 8 at Canadian Nationals. Each of them needs to win out and pray.

One such hanger-on is Toronto's own Matt Vienneau. Vienneau, an outspoken member of the Magic community for the last several years, has recently fallen off the Pro Tour "gravy train" and needs an amazing finish here in order to qualify for Worlds. A good record might get him a rating invitation, but the only sure thing would be to make the team.

Vienneau's first pack was a goody: Metamorphic Wurm, Muscle Burst, Werebear, Chainflinger, Ember Beast, Bomb Squad, Afflict, and Aven Windreader made up the bulk of it. Vienneau said earlier that he knew of Gerstl's penchant for green, so he planned on staying away from that color. The red in the pack was abnormally strong, and by taking a red card he was setting up for a fight over a weak color. That left Afflict and Windreader, and Vienneau chose the stronger card - the 3/3.

The problem was that Fortin just made the same pick to Vienneau's right.

The next pack offered a Mystic Zealot and a Dreamwinder, plus Patriarch's Desire and Painbringer. Vienneau stuck to blue and took the 'Winder. His third pack had nothing good, and he had to take a Millikin. After that, the blue dried up and he needed to find a second color.

White and black were coming en masse - his fourth pack contained another Patriarch's Desire, another Afflict, a Hallowed Healer and a Mystic Crusader. Having already shipped good black, Vienneau figured white was his best bet, and took the Healer over the rare.

His next few picks were all good white cards - Lieutenant Kirtar, Angelic Wall, and Aven Flock, a gift 7th. His 9th pack contained a Pilgrim of Virtue as well as an Afflict - black was clearly underdrafted at this table. Matt played nice and took the Pilgrim.

Torment started out as a rough beat for Vienneau - his pack contained a Mutilate, but the only good blue or white cards were Militant Monk and Strength of Isolation. Matt fiddled with the Mutilate for awhile, but he sucked it up at took the Strength. (The Mutilate drifted all the way to Page four seats away, and he counterdrafted it. Like I said, black was underdrafted.)

Vienneau took Major Teroh over Hypochondria second, but after that his choices were pretty cut-and-dried - Aquamoeba, Deep Analysis, Teroh's Faithful, Churning Eddy, Floating Shield, Ghostly Wings. In each pack, the card he chose was clearly the best card in the pack. At the end, he counterdrafted a Mind Sludge and a Rancid Earth, since there weren't enough black drafters to pick them all.

Judgment's first pack offered Matt some choices - stay the path and pick the Wormfang Drake, or go for the splash with Swelter or Phantom Nantuko. Matt decided the ¾ flier was good enough and took it.

He couldn't stop himself from straying with his second pick, however. Faced with Aven Fogbringer, Unquestioned Authority, or Arcane Teachings, Matt dipped into red for the Teachings.

He stayed true to blue and white for the rest of the draft, and his draft really came together throughout the rest of the Judgment pack: 2x Chastise, 2x Vigilant Sentry, Phantom Nomad, Mirror Wall, Valor, and Keep Watch.

It was looking a little thin for Vienneau pre-Judgment, but h had chosen the correct colors and the cards came flowing through. He ended up with enough solid picks that he didn't even need to play the Teachings and risk messing up his mana base. (Perhaps the Fogbringer or Unquestioned Authority would have been better.)

Vienneau's deck is definitely good enough to go 2-1, and with a little luck he can pull off the necessary 3-0. In his way stands Gab Tsang in round 10...