The 1999 Australia Champion began the draft very cautiously, taking sub-optimal cards on the wheel in the first pack, this served him well however, sitting himself in U/B. He found himself flanked by his fellow 1999 Australian Team Members, Jake Hart & Adam Kemp. Jake Hart to his right had signaled red and Adam Kemp, who opened in seat #1, had opted for white. Some strong cards went to the other colors but he seemed to be happy with a run on black to his left and right. There were only three black drafters and both the other two were next to each other on the other side of the table. He played the diplomat, refusing to counterdraft, because hey, Aussies just aren't like that. 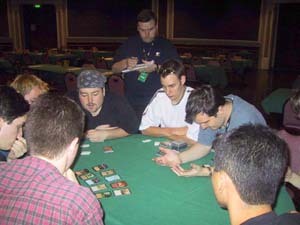 Packs 9-16 were where he really got rewarded, he opened a Painbringer, and grabbed 2 Patriach's Desire in short order. Pack #14 was opened by Pang Ming Wee, three to his left, the rare - Shadowmage Infiltrator. Pang was committed to heavy green so he had to pass it up. To his left were Adam and Anatoli Lightfoot, respectively. Anatoli was R/W and Adam was W/U, Anatoli passed Finkel for a Halberdier, and Adam, tossed and turned as to hate draft it (he could have made good money out of it). In the end however, he realized that Michael hadn't touched much of the blue coming through to him and let it pass. Michael thought it couldn't get better than a 4th pick Finkel. It did, much to Adam's disbelief.

Anatoli's pack saw another Shadowmage Infiltrator opened and dutifully passed down the line to Michael. He was now the man to beat. In the final pack Andrew Corney had been forced out of his colors by one of the black players who had had to move - so black wasn't going as far as it was before. He still managed to pick up his 3rd & 4th Morbid Hungers. He could win without attacking with those alone. 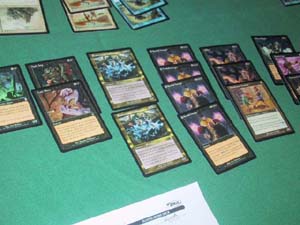 When we asked Michael what he thought of the draft, he replied:
"The deck has the possibility of going 3-0, barring any major mana problems, I'll probably need 2 wins and a draw out of it". This is the deck most people on the floor are picking to win the pod , but still he remains level headed: "Jake really has a solid R/G, and Roger Miller might give me problems in the mirror (U/B)".

All the best, Michael and thanks for taking time out to talk to the Sideboard Staff.