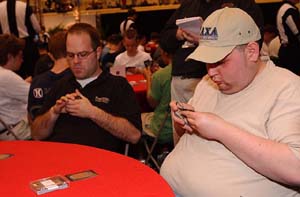 Mike Long and Steve O'Mahoney-Schwartz have been playing this game for a long time, but I'm sure they still felt the butterflies as they sat down at table 3 to draft with Top 8 of US Nationals on the line. Long has just two losses so far this weekend and has always considered Nationals to be "his" tournament. I can imagine no better stage for him to attempt to return to the spotlight. OMS, meanwhile, has never left the stage and doesn't want to. If he doesn't make the US National team, though, he'll find himself without an invitation to Worlds for the first time since elementary school. He just ended best friend Jon Finkel's run in the previous round and with a 6-2-1 record he had no room for another loss. Long fed OMS during the draft and was being fed by Bill Stead. Dave Humpherys and Osyp Lebedowicz were on the other side of the table.

Steve O debated Repentant Vampire versus Wild Mongrel for the full-allotted time after opening his first pack. He went with the Vampire and decided to try his hand at cutting off black and setting himself up for Torment. He then took Concentrate from the pack Long passed him (which also included Dusk Imp, Mindslicer, and Cephalid Scout) and never seemed to reconsider his colors. Pick #3 was Crypt Creeper over Reckless Charge and Krosan Archer. He then sucked down Aether Burst, Psionic Gift, Millikan, and Cephalid Scout. At the end of Odyssey he seemed to have a couple good cards and some decent synergy, but nothing thrilling.

Long also seemed to take the full time deciding on his first pick – he eventually went with Firebolt. Long has often been a fan of forcing the unwanted color and red seems to be the least wanted color this weekend. His second choice was Divine Sacrament (over Reckless Charge and Krosan Archer). He didn't see a lot more white for a while, but Long always seemed to have this card in the back of his mind, knowing how powerful it could be if he wound up with a bunch of white creatures.

Long's third pack have him an easy pick and a good sign: Flameburst was by far he best card left. He then took Rabid Elephant fourth and got a second Flameburst fifth. His theory that no one once would want red appeared to be working out perfectly. The rest of the pack wasn't super-exciting, but he his 9th pack did still have both Pardic Firecat and Halberdier.

Steve O busted a Faceless Butcher in Torment and got a Cabal Torturer fourth, but the rest wasn't nearly as exciting and he didn't really get paid off the way he might have hoped. Strength of Lunacy wasn't what he wanted to draft 2nd, nor did he want to be drafting Aquamoeba third. Slithery Stalker (which he got 5th) is certainly lot better now that Judgment has come out, but the rest of Torment was just Restless Dream and Cephalid Aristocrat quality cards. Going into Judgment his card quality looked mediocre at best but I've seen Steve win with worse.

Long's first Torment pack wasn't nearly as good as Steve O's ... Crippling Fatigue and Hydromorph Gull were the best cards, but those were the two colors he wasn't considering playing. He wound up taking the Gull, but it never worked out. His send pick fit in a little better – Centaur Chieftain – but it was only his second green card. Violent Eruption third had o make him happy since it meant there were no red drafters on his left either. After that he grabbed a second Centaur Chieftain, followed by two copies of Sonic Seizure (5th and 6th picks). He rounded out the pack with Pay No Heed, Mystic Familiar, and Centaur Veteran. Going into Judgment he had a lot of red (almost all of which was good burn spells), but it wasn't at all clear whether he was green or white. I guess that's actually a pretty good situation to be in going into Judgment – he would be able to draft and play whatever green or white bombs he opened up.

Long's Judgment pack had Battlewise Aven, Guided Strike, and Chastise. Knowing how low his creature count was he went with the Aven and had to be leaning toward white. Arcane Teachings was an easy second pick and then in pack three he got passed Anurid Brushhopper – three colors it was! The white kept coming with Battlewise Aven, Border Patrol, and Suntail Hawk and that Divine Sacrament looked like it might be coming back into play. Long 7th pick was a dragon. I don't think it matters which dragon you get, when you get a dragon 7th, you know your draft is going well. Worldgorger Dragon went straight into his deck. Spurnmage Advocate 8th doesn't suck either. Long also got another Suntail Hawk, but when he sat down to build his deck he decided against his white weenies. His red-green-white deck with fatties and burn looked plenty good enough to return him to Sunday play.

Steve O needed to get hooked up in Judgment, but since he wasn't playing green or white, he can't have been too optimistic. He got a couple decent fatties early: Sutured Ghoul, Treacherous Werewolf, and Wormfang Behemoth. The rest was decent (Flash of Insight, Grip of Amnesia, Mirrored Wall, Filth), but I'm not sure it's good enough to win the table, which is what he needs to do to keep his PT attendance streak alive.