In pod two generally you will have two players advance onto the top 8, so you need to have a pretty busty deck in order to win. This was a pretty strong pod with seat 1, David Leader, seat 2, Matt Linde, seat 3 Craig Wescoe, seat 4, Tom Willoughby, seat 5, MikeyP, seat 6, Joe Crosby, seat 7, Kenny Hsiung, and seat 8 Mauro Bongiovanni. 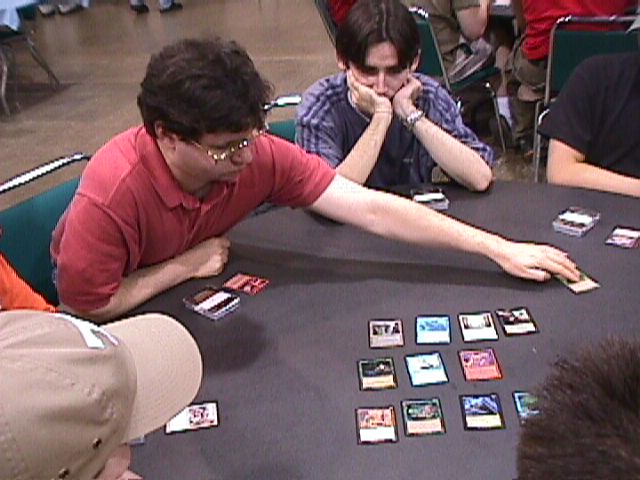 One of the problems in Odyssey is that the pack collation seems much more random than it has been in the past, so you will have boosters with 5 or 6 cards in one color and none or just one in some other colors. This makes it very difficult to send signals (a signal is when you draft a card you don't really like, you just draft it so that your neighbors know what colors you are). There is a big advantage to being friends with your neighbors in Rochester, both of your decks get better because you don't step all over each other. Pros know the relative depths of the colors so the first few packs are often just used for signaling what colors you are, so that nobody will have to fight for a color with a neighbor. For Odyssey specifically you have a depth where you want 4 green mages, 3.5 blue mages, 3 black and white mages and 2.5 red mages.

MikeyP was fated to play a tragic part this booster. Hamlet or Macbeth could have not played a more predestined path to his doom. I don't know, sometimes it seems like there's nothing you can do, everything just goes absolutely wrong.

First booster was opened by David Leader, he picked a black card, then Matt picked a red card, then Craig picked a blue card. At this point, there was a choice for Tom between either a white card, Kirtar's Desire or a green card, Druid Lyrist. The Druid Lyrist would be a signal, showing that Tom wanted to go green, and most likely green/red as those colors have the best synergy. However, Tom passed on the Lyrist and for the first pick Mike decided to show green as a preference. Personally I think would have picked a green card in Tom's place, why not signal green it's stronger than white in general and both players on each side of Tom are known for being friendly drafters.

Mike then picked up a Springing Tiger in pack 2, while Craig busted a Stalking Bloodsucker, now firmly committed to Black/Blue, and getting no competition for each color on either side of him. Mike got a Pardic Firecat and appeared to be settling down into Red/Green, while Tom right in front of him was picking almost entirely white cards with one black card.

I talked with Mike after the draft and he read the one black card that Tom picked as a signal, however watching the draft, it seemed to me that Tom had not yet settled into a second color to me. MikeyP though had settled firmly into his colors by the fourth booster into red/green.

Booster 4 was opened by Tom Willoughby. The strongest card there seemed to be Firebolt. However, this would put Tom into one of the weakest color combos in Oddysey, red/white, and force Tom to fight with Mike for Red, the shallowest color in the format.

Tom picked the Firebolt. What is a man to do? What can one do? This was the disaster that you always dread in Rochester, fighting over a weak color with your upstream neighbor. It's not bad to share green or blue because it's so deep and sometimes it's ok to share other colors especially if you want different things from each color.

But here it was pack 4, and MikeyP was trapped, trapped like a rat. I honestly don't know what you do here. Perhaps MikeyP read the signals wrong and he should have looked at matching green with black or blue, it's hard to tell.

Then again, maybe it would have all worked out anyway, and Tom and Mike would want different things out of the color red.

The draft proceeded, and MikeyP opened up a bunch of terrible green cards, and a Wayward Angel. I don't see how you defensively draft an angel here, so when Mike dropped his hand on it, he must have wanted it in his main deck, but it was clear that right in front of him Tom was pure Red/White so how can you even think about playing a white card? I think he had to pick up a Chatter of the Squirrels here, an absolutely terrible first pick, but something that adds an awful lot of aggression to a red/green deck.

MikeyP then wheeled up an Anarchist and Gallantry showing again he was willing to dip into white. Maybe he became temporarily unhinged and was trying to punish Tom for taking his red cards by spitefully drafting white cards that Tom could use. In any case, the draft proceeded, now with colors solidifying, seat 1 BW, seat 2 GR, seat 3 BU, seat 4 WR, seat 5 RG, seat 6 UB, seat 7 BR, seat 8 UG.

BW by the way (played by David Leader) is another just awful color combination. All the black cards want to have stuff in the grave, so you can activate them, so they really power up if you have blue (BU is in fact one of the most powerful color combos in Odyssey draft). Black/White though, like Red/White has neither depth (having neither green nor blue) nor good synergy. Sometimes you can love your neighbors too much, and if you don't fight a little you can get stuck in an awkward color combination.

MikeyP then passed counterclockwise a Caustic Tar to Tom, perhaps he was still hopeful that Tom would get the heck out of Red and go into Black, and Tom indeed snapped up the Caustic Tar, but as the draft proceeded MikeyP's hopes diminished as it became clear that Tom merely hated that card away and wasn't going to play it.

Another Stalking Bloodsucker showed up, while MikeyP picked up his first of two Liquid Fires. MikeyP's red/green deck was starting to look slow and unwieldy instead of the fast aggro deck that many other pros prefer.

On MikeyP's left Joe Crosby opened up a Finkel, while MikeyP grabbed a Nantuko Disciple, then MikeyP first picked an Elephant Ambush. While Elephant Ambush is not bad, the other players were all busting vicious picks like Tom's Shower of Coals, Kenny's Savage Firecat, Linde's Shower of Coals, then Joe Crosby got a gift with an aboshan cephalid emperor (the best card in the set) going through David Leader (BW), Mauro Bongiovanni (GU) picking Overrun instead (I would pick Aboshan), Kenny Hsiung (RB) to end in Joe Crosby's hot little hands. I think I would jump out of my seat and do a little dance if I somehow got a fourth pick Aboshan, but Joe just coolly picked it up as if it were his due.

Wescoe was quietly picking up a very solid black/blue deck, while Linde with an excellent seat for Red/Green just scowled ferociously as the cards went by. I asked Matt afterwards why the frowny face and he said that the packs were coming up poorly for red/green and there enough good creatures.

MikeyP continued to stick with his red/green deck. He knew he was doomed now, and quit fooling around with the white cards, just hoping to bust some awesome cards when the boosters came around so he could open them. Unfortunately, when it was his first pick once more, the best Mike could do is some Diligent Farmhand. Mike did manage to pick up a Werebear to speed his deck up, but, in a draft with two Ashen Firebeasts, triple Shower of Coals, Savage Firecat, Aboshan, Finkel, double Stalking Bloodstalker, in addition to more Firebolts and Afflicts than I could count, it just seems that life has been unfair to MikeyP, not only getting trapped downstream of a guy drafting his colors but also opening up some of the weakest cards you can get for red/green.

All in all I think Mike will be happy to escape this pod going 1-2.