Neil Reeves is considered not just one of the best Limited players in America, but in the world. With a 5-1 record heading into today, he seemed to be in a good position to make Top 8, and Rochester Draft was a good place to start. Unfortunately, as Reeves sat down, he saw Gerard Fabiano, Mike Turian and Craig Krempels of TOGIT all sitting across from him in a row. This put them in a great position to control the draft and dominate the table. 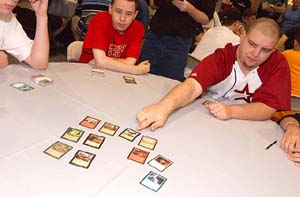 Jonathan Cassidy opened the first pack, and took Nantuko Husk. Whipcorder went second to Fabiano, Pinpoint Avalanche to Turian, Aven Soulgazer to Krempels, Krosan Tusker to Wagener, and Wretched Anurid to Miller. Reeves, who was in the seventh seat, took Battlefield Medic, with two white drafters in TOGIT across the table from him. Berkowitz in the eight seat to the left of Reeves took Wirewood Herald and Leery Fogbeast, going into green. "The fix" started in the next pack, as Fabiano took Gustcloak Harrier, sending Cruel Revival to Turian. Krempels went into Clerics with Daunting Defender, leaving Slipstream Eel for Reeves. This wasn't the strongest pick in the world, but it established Reeves as a blue drafter at the table when there were none. This ended up not working out too well, as Mistform Skyreaver went right through the TOGIT players so as not to create a conflict with Gerard's blue/white deck, and went to Wagener. Reeves' only option left was to take Screeching Buzzard, and hope to still get decent picks even though he was being fed by a black drafter.

Krempels opened the next pack and took Death Pulse, leaving Daunting Defender for Reeves. At this point, Reeves not only had to fight for black with Miller who was feeding him, but with Krempels who was black/white Clerics a few spots away on the right. Improvised Armor and Crown of Suspicion came around, and when Reeves opened, his pack, he was none too happy, even signaling to me that he was already predicting a 1-2 record. He had to settle for Akroma's Blessing, while Berkowitz gladly took Sparksmith. Legions worked out much better, providing Reeves with two Skinthinners, an Infernal Caretaker to bring them back, and Aven Redeemer. Scourge provided a paid or Zealous Inquisitors, a good evasion creature in Dragon Stalker, and Bladewing's Thrall. When Miller opened his pack, it contained Torrent of Fire and Twisted Abomination. He was black/red so had to think it through for a bit, and decided on the removal spell, sending the great creatures to Reeves. When Reeves opened his Scourge pack, he looked at the cards and threw his trademark toothpick out of his mouth and onto the ground in disgust- the best pick for him was Aven Farseer. As the last Scourge pack wound down, he actually picked Trap Digger first, then started reading it with an attitude of "What does this thing do, anyway?"

Sideboard: Would you like to elaborate a little?
Reeves: The fix was obviously in with TOGIT, which is fine. They were going to end up with the three best decks at the table no matter what happened, but then the cards got opened for them like 2-for-1. It was ridiculous. It seemed like the three randoms at the table were also in on the fix, because...umm, yeah, they were pretty much the nut low, so...the three TOGIT guys, Turian will 3-0, maybe Gerard. Krempels will 2-1 and the rest of us have to fight it out for the last 2-1.

Sideboard: Do you think a situation like this lends something to the theory going around at the last Rochester Draft Pro Tour that the format is less skill intensive? Obviously this is the opposite, where people are manipulating the table heavily to go in their favor. Do situations like this make you more of an advocate of Booster Draft?
Reeves: Yes, yes, yes. Booster Draft is much better in my opinion. I understand that if you sit by your friends, you're gonna hook them up, they're gonna hook you up, so on and so forth. But, that was the full blown fix, and the randoms were terrible. I don't know. It's just ridiculous. I'm not very happy about that draft.

Sideboard: Did you see TOGIT doing anything specific? What picks were they making that were beyond the typical "I help you out, you help me out" things you'd see at a table?
Reeves: It was obvious when the draft started that the fix was in, because in the second pick of the draft, Gerard would have normally taken Cruel Revival, but he took Gustcloak Harrier and shipped it to Turian. So, they obviously knew what colors they'd be. They sat down and said "You're blue/white, you're black/red, you're white/black." Also, when Krempels opened his pack and Gerard wasn't blue/white yet, he was just white. Krempels was white too, and the pick was either Daunting Defender or (Mistform) Skyreaver. So, he's going to be the first drafter at the table to say "Hey! I'm drafting blue." You obviously take the Skyreaver there, it's an easy pick, but he took the Daunting Defender. So, it was obvious that it was set up Soldiers-white, Clerics-white, black/red in the middle to Turian. He would have taken Skyreaver and went blue in a heartbeat, but instead he took Daunting Defender. He took Daunting Defender over a better card earlier in the draft. It was just a full fix, the fix was in.

Sideboard: The Skyreaver seemed like the worst thing that could happen to you, since there were no blue cards in the first few packs, and you established yourself as a blue drafter with Slipstream Eel. The 6/6 just screwed everything up.
Reeves: Whenever he took the Daunting Defender, I knew that Gerard was blue/white, so that's one blue player. If I get passed the Skyreaver, and the other two guys next to me are green/red and green/black, I'm the happiest man alive. Because, then there's only two blue players, I get a Skyreaver late and my deck is going to turn out just fine. Instead, he ships the blue card, that means Gerard is blue, and that just blew me out of the water. So, now I've got to fight with (Miller) for black, which isn't bad because it's supposed to be the deepest color in the format. I knew I was going to fight with him, and I would have much rather been blue/white, but that Skyreaver just blew me out. When he didn't take it (Krempels), that was just the full fix. But you know what? I'm not saying they're wrong. If it was me, Bob (Maher) and Dave (Williams), we'd have done the exact same thing. But, it was obvious even before the draft started that they knew exactly what colors they were going to draft, and exactly what archetypes. 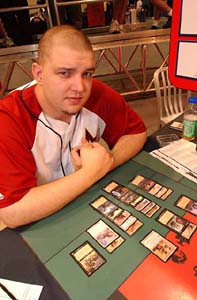 Sideboard: It seemed like you were in a bad position from the start, because you had a black drafter feeding you, and Krempels drafting white/black Clerics two seats away.
Reeves: I didn't think he was going to be white/black Clerics, I mean he was in a better position to go Soldiers than Gerard was. But, he already knew he was Clerics, so he took the Clerics. Like, both Daunting Defenders he took early were mispicks. If it was just a normal eight man draft where no one knows nobody, they would have been mispicks. But, since the fix was in, they were correct. I mean, what can you do?

Sideboard: You didn't seem too happy with the packs you were opening either, especially the last one.
Reeves: Oh dear God. Their decks were going to be the best, and they opened packs twice as good as the rest of the table. (Berkowitz) opens the Jareth, and it seemed like it was just bouncing all around. I first picked this thing (Aven Farseer), but I did open Skinthinner, which was good. Oh well.

Sideboard: Do you still think this is a 1-2 deck?
Reeves: Oh, I'll 1-2 with it. I gotta play one of the randoms, and they're going to make play errors and I'm going to win. That's how it's going to happen. I've got these (Skinthinners) with this dorkus (Infernal Caretaker), and my air force is decent. I may be able to pull 2-1 out of it, but I don't think I can beat any of the TOGIT players, not a single one of them.

When Gerard was Soldiers, and his deck was looking terrible because he had no Stingers, Turian opened one, then Gerard opened Aven Warhawk. Whatever.

Sideboard: Anything else?
Reeves: Nope. Pretty much can't win.