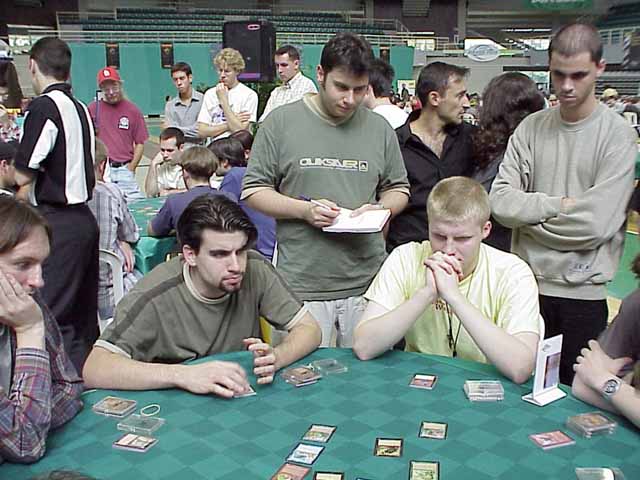 While pod 2 of the second draft didn't contain as many name players as pod 1, it was a very interesting draft to cover, including Worlds top 16 finisher Ed Fear, and Pro tour regulars Mike Pustilnik and Patrick Mello. The pro players were distributed across the table, meaing that any co-operation was dependant on the buffers. There was one player in this illustrious pod who was only 14 years old. Marcio is regarded by friends at his local store as a great constructed player, but a little weak in limited, and before the draft began it was felt that Marcio would end up as 'The Punch'.

Edward and Patrick were in seat positions 5 and 7 respectively, meaning that while Ed would likely fix in colours fairly early on, while Patrick would have to be more flexible until late in the first booster. However, there were many good cards in the opening booster, meaning that Ed got a Megatherium, and Patrick as the wheel took both an Ogre Taskmaster and a Flaming Sword. From booster 2 he took a Fresh Volunteers, after Ed had taken the Nightwind Glider. Booster 3 involved a lot of very strong cards, including Shock Troops, Waterfront Bouncer, Trap Runner and Wild Jhoval. Ed, however, drafting third from this booster decided to take the Steadfast Guard over the Trap Runner, letting Patrick take the Trap Runner. When I asked Ed afterwards he said,

'I was trying to tempt Patrick out of rebels by offering him a better card which was a soldier, it didn't work out in the end but I still think I was right'

The next few boosters saw Patrick pick up another Fresh Volunteers, a Cho Manno's Blessing (which he picked over Reverent Mantra) and a Steadfast Guard. He then Backed these up towards the end of the draft with a Kris Mage (much needed to kill the 2 Bouncers he had passed to Marcio) and a Lightning Hounds, fixing him in Red/ White. Meanwhile Ed picked up another Glider before deciding to fight Phil for blue, taking Stinging Barrier. He finished his draft with another Guard, Jhoval Rider, Task Force and a Ramosian Sergeant (which he picked over Crenelated Wall in order to augment his Grizzly Rebel Chain). At the end of Masques Ed was fixed in white with an option on Blue.

Nemesis started well for Patrick with booster one giving him a Vanguard and booster 2 giving him a Flowstone Overseer. The next 2 boosters brought him very little however and he took no real cards until booster 5 where he took 2 Seal of Fire, and subsequently a Flowstone Crusher and a second Vanguard. Ed took a Saproling burst as his first Nemesis pack, maybe looking to splash for the powerful enchantment. His next 3 boosters gave him a Topple, a Falcon and a Sivvi's Ruse (which he was fairly disappointed with as it was his booster). He then solidified in Blue with a Cloudskate, Oraxid and Rootwater Commando before taking an Angelic Favour, Second Falcon and a Seal of Removal as a nice late pick. At the end of Nemesis Patrick looked to have a reasonable Red / White deck while Ed had a pretty strong Blue / White deck, although he knew he'd be fighting for blue right through Prophecy.

Patrick's Prophecy boosters were amazing early on, giving him a Mine Bearer, Fault Riders and Diving Griffin. Ed meanwhile had squeezed a Stormwatch Eagle out of Phil, which he backed up with a Diving Griffin and an Avatar of Hope. Patrick's deck got better and better with a Trenching Steed, Rhystic Lightning and finally an Avatar of Fury. At the end of his draft, Patrick's deck looked like a very solid Red/White beatdown deck, with some flyers and game breakers like the Avatar. Ed managed to draft a Jewelled Spirit towards the end of Prophecy, thanks to the grace of Phil who had co operated throughout the draft. His deck was completed with another Mine Bearer and a Sword Dancer, leaving him with an aggro Blue/White deck, with Jewelled Spirit to break any lock.