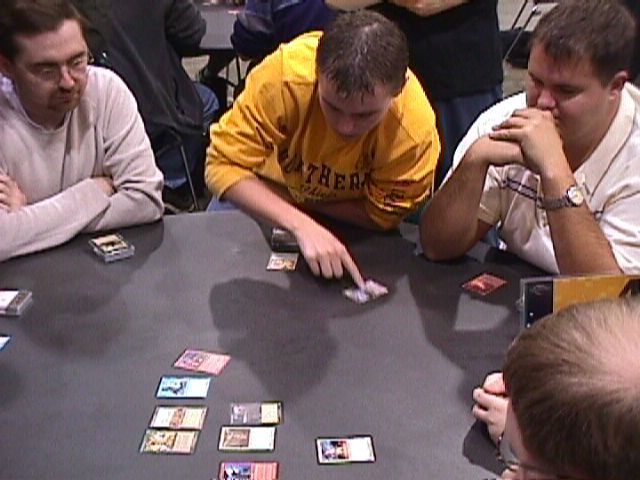 Needing to win the table in order to have a shot at the top eight, Phillip Freneau was stuck in seat one for his second draft. The first pack was slightly heavy on good green cards, with Elephant Ambush, Howling Gale (which the entire table seemed not to notice every time it came up), Seton's Desire and Cartographer. Perhaps because of this, Freneau chose to take the only non-green card good enough to pick first, Aether Burst. Littlefield in seat two chose Elephant Ambush, Parker in seat three took Zombie Assassin. After Brandon took Acceptable Losses extremely early, Ellis also chose to make an early signal with Screams of the Damned, Donahue took Reckless Charge, Fallon took Patrol Hound and Hall wheeled Seton's Desire and Cartographer. Everyone's picks seemed to make sense given their situation, and the Howling Gale made it all the way back to Brandon.

In pack two, most of the rest of the color decisions seemed to call into place. To Freneau's left was Red/Green and then Blue/Black, to his right was Green/Red off of Seize the Day of all things and then White/Blue. He chose despite that to enter White/Blue as well, taking Kirtar's Desire and Cephalid Scout. His colors were slightly underdrafted at the table overall, with there being only three blue mages until Ellis started taking blue cards later on. He held off on picking a second color for quite a while, sacrificing a first pick on a Infected Vermin to avoid having to choose green a pack earlier. White was restricted to three players, with Brandon strangely entering White/Red without provacation.

Although his cards were not the best, for a time it looked like Freneau's position was excellent. Fallon hadn't picked up a white card since his Patrol Hound, and had gone out of his way to pick up a Sylvan Might. If he had abandoned white for green, Freneau's position would have been excellent indeed. The problem was that the cards failed to break in his favor. The card pool was very strong, but pack after pack failed to give Freneau anything above the level of solid. He solidified into White/Blue on the basis of Mystic Visionary, Patrol Hound and Phantatog in the next two packs, then picked up a Cephalid Looter and Aether Burst but things went downhill from there. He also made the first pick I significantly disagreed with, taking an additional Visionary over a second Scout, and shortly after that chose Fervent Denial over Blessed Orator. Whether that was what triggered the decision or not it's hard to say, but Fallon then got to wheel Angelic Wall and Blessed Orator. That seemed to be what yanked him out of a blue deck with green in waiting back into White/Blue. Fallon seemed increasingly frustrated with the draft, as he had two Persuasions but no real deck to back them up with in what should have been a fine position.

At this point, the only real decisions left for him were individual card choices. He once again passed up a Cephalid Scout for a Mystic Visionary, but otherwise his decisions seemed straightforward for the deck type he was trying for and his choices seemed right. The problem was that while many ridiculous cards were opened for other players, he was forced to second pick an Embolden and Aven Fisher, which was symbolic of the type of draft he had. In the end, he ended up with what should be a perfectly solid deck full of playable cards, but without either the bombs or the powerful flyers his deck needs to operate at the highest level. It's capable of winning any given match, and it's entirely possible that the decks with the tools capable of beating him didn't really come together. Regardless of all that, dealing with a significant number of large creatures will be a huge problem for his deck. He would probably be fortunate to go 2-1, although it seems unlikely he would be unable to win at least one match.