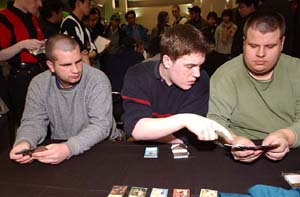 Kai Budde turned down numerous offers from top pros and chose to team up with a couple old friends for the Team Pro Tour in New York six months ago. (To be fair, Dirk Baberowksi is one of the most talented players who ever attacked for two, but he was retired until his buddy Kai pitched the idea of playing together.) Their opponents in the finals were three relatively unheralded players from France who were actually the beginning of a French invasion of Pro Tour Top 8's. Amiel Tenenbaum, Nicolai Olivieri, and Gabriel Nassif lost that final match, but the string of French second place finishes finally ended in San Diego when Farid Meraghni took home the title.

Phoenix Foundation and Les Plus Class met again in the Osaka Masters semifinals.

Things started going the German way from the very first pack: they opened a Wild Mongrel, a Cephalid Looter and not a whole lot else. This wasn't as good for them as it might be for other teams because they always draft red-black in the C-seat. Budde took the Mongrel in seat B and then directed Marco Blume to counter-draft the Looter. The really good news for the Germans was that they continued to open Looters (3 plus a Broker) and Mongrels (2) while the French didn't open a single copy of either card.

In addition to out-opening their opponents, the Germans also seemed to have a better strategy. By splitting black (whereas the French chose to split green) and by having a black-red deck, they were in much better position to take advantage of Torment. Blume scooped up Barbarian Outcasts 11th while Les Plus Class was forced to d-draft Pardic Collaborator. Tenenbaum's mana curve was rescued by Torment when he picked up two Basking Rootwalla's and two copies of Seton's Scout, but Olivieri never did manage to find more than 3 monsters that he could summon for less than four mana.

In the end it wound up with Baberowski played blue-white against Tenenbaum's red-green. A classic battle if ever there was one. Blume took his red-black deck into battle with Olivieri's black-green. And Kai Budde actually wound up with four-color green. Rites of Spring, Deep Reconnaisance, and Far Wanderings allowed him to add Cephalid Broker, Balshan Collaborator, and Mystic Enforcer to his double-Mongrel green-black deck. Even Gabriel Nassif, who ran a fairly pedestrian blue-white against Budde, admitted to me that his team needed to get a little lucky to win.

Tenenbaum used Firebolt and Thermal Blast to blast his way through Baberowski's blockers in their first turn. Basking Rootwalla and Krosan Archer just tapped sideways every turn and Muscle Burst plus Rites of Initiation gave Tenenbaum a 1-0 lead about 90 seconds after the round started. Baberowski then stalled at three lands in Game 2 only to see Tenenbaum blow up his only Island with an Earth Rift. This turn of events staked Les Plus Class to a 1-0 match lead before anyone else had even finished a game.

Budde and Nassif wound up in a damage race in their fist game, but Budde had Cephalid Broker in play, which allowed him to dig for the Dusk Imp he needed to chump block in the air and win the race. Budde's rainbow manabase hurt him in the second game when he played out Forest, Forest, and Island before he ran out of land. With Budde screwed for black mana, Nassif was able to get way out in front and Budde wasn't able to stabilize the board or to race Nassif's fliers. Their match was on to game 3. 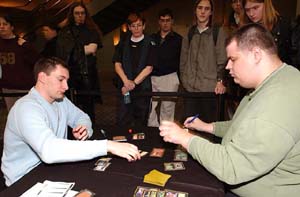 Blume and Olivieri had quite a drawn out battle in their first game. They took turns killing each other's creatures until Olivieri discarded his hand to sweep the board with Sickening Dreams. That freed his Gorilla Titan from the clutches of Blume's Faceless Butcher and the Titan only needed to attack twice to finish Blume off. Blume did have Malevolent Awakeing in play (though he didn't have enough black mana to activate it as a response to the Dreams). Blume had just one card in his hand, but it was Skeletal Scrying. That dug up a Crypt Creeper and a Flame Burst and suddenly Blume was right back in the game. Creeper plus Flame Burst took out the Titan and that gave Blue time to abuse Malevolent Awakening. 1-0 Blume.

Nassif drew a lot of games in his deciding game with Budde, and his spells weren't as good as Budde's either. Ghostly Wings just pales next to Rootwalla, Mongrel, and Rabid Elephant. Nassif desperately blocked Rabid Elephant with Skywing Aven, discarding his 9th and 10th lands while trying to draw an answer. Nassif pounded his deck whiel Budde attacked mercilessly with his elephant. Budde's Soul Scourge ended things a turn early and it all came down to Marco Blume and Nicolai Olivieri. (Meanwhile Budde joked about winning just his third Masters match ever – he's won more Masters matches today than in the previous history of time.)

Blume got to pull off the dream in game 2: Last Rites discarding my Fiery Temper – kill that while I destroy your hand. He followed that up with Shambling Swarm and seemed in command. Olivieri used Insidious Dreams to go get his Mogue Theft so he could get back the Laquatus's Champion that had heard Last Rites performed. Blume answered nicely with Bomb Squad – Olivieri did have the option to regenerate, but only if he wanted to take 4 damage over and over again. Olivieri did eventually kill Bomb Squad, but had to go down to two before he could get his Champion back into play. Blume pointed Flame Burst at his head and the Phoenix Foundation was through to the finals.