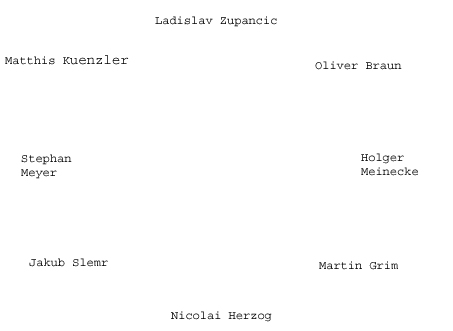 The Seating for Pod 1

Once again all of these players ended up playing each of their first pick colours in this draft. There was a little bit more chaos later on though, as Jakub and Nicolai started exploring each others colours - both ending up with white decks with the Norwegian splashing a fourth.

I am not sure I agree with Oliver's pick here. I think he got 'lured' in by the fatty where the Elephants are probably the more efficient creatures.

Again a questionable green card pick here, with many of the top Pros preferring the Wild Mongrel in this position.

I imagine the green mage took the Face if Fear over the Morbid Hunger because he was intending to splash that colour, but is it a good enough card to splash?

Nicolai was quite dissapointed when Jakub took the Patrol Hound, but Slemr had only one colour and had to move into a second at this stage.

Again Jakub moved into a neighbour's colours here, but in the end he dropped the idea of being a green mage.

These are the colours the players ended up playing in their decks: 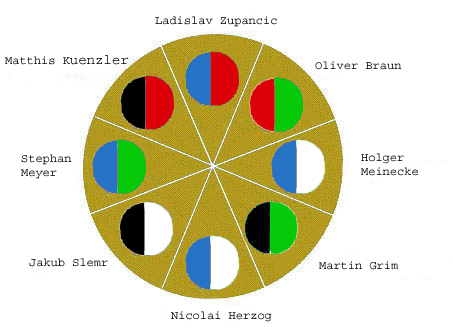 As with the last draft I covered there were alternate blue mages round the table, but surprisingly only three green players. Of note there were three red players in a row.

Oliver also picked up a Farmhand.

Stephan did not really have a pick from this booster, but Jakub managed to wheel an Afflict and an Aven Cloudchaser, whilst Matthias wheeled a Diabolic Tutor.

So, at the half way point of the draft Jakub in particular was feeling a little unsure about what colours he would end up playing and it seemed like Matthias was having a little trouble too - eventually being forced into black/red.

Other interesting picks and power-cards:

Ladislav Zupancic had been drafting a red/blue deck all the way through this draft, but he made a few challenging decisions. Firstly he took a Cephalid Scout over a Broker, then he took Firebolt over Persuasion . . . go figure.

Nicolai took a third Cephalid Scout over a Syncopate. He later explained to me that his deck had way too few creatures.

Holger Meinecke went on to draft not one but two Wayward Angels!

Nicolai took a Mystic Enforcer off Jakub, but splashed to play it.

Jakub himself had a Repentant Vampire, whilst Stephan Meyer managed to pick up an Overrun.