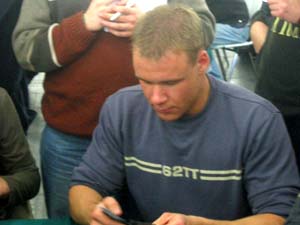 With only two losses former German national champion (1998) Dirk Hein had the best chances to make top Eight. But first he had to draft once more, and the competition at the second table was tough: Yann Hamon and Antoine Ruel, to name just a few.

For the whole weekend the color of his choice was green. His monstrosity of a sealed deck featured two Molder Slugs, who helped him go 8-1 on Saturday. In his first draft today his deck sported tons of green critters supported by a total of five off-colored shards (3 Crystal Shards, 2 Granite Shards), earning him a 2-1 record.

He started the second draft in exactly the same fashion: sitting in the eighth seat, he started giving green signals from the first pack on, drafting Elf Replica, Turn to Dust, among others. It seemed to pay off for him, since only one other drafter on the opposite side of the table was interested in picking green cards. Everything seemed to work out perfectly, and Dirk was only waiting for the moment when the better green cards would be opened up. It was in the sixth pack when this moment finally came:

Two seats on his right the pack opened up with a Viridian Shaman and a Tel-Jilads Archer. The first pick was the Shaman, but surprise and frustration showed clearly on Dirks face, when Aaron Brackmann, sitting on his right, suddenly took the other green card. Dirk drafted a Myr Enforcer instead and had to adopt his strategy quickly. He had a few white cards already, but the competition for that supposedly good colour was tough. Dirk bought some time by drafting good artifacts like Bonesplitter and Mirror Golem.

Going into the second booster he had the first pick, and chose Grab the Reins - maybe red would bring him more luck. In the next few boosters he didn't get lucky and couldn't draft any useful card. By the end of the second pack he had some blue cards like Thirst for Knowledge, a little black, a Granite Shard and more artifacts, Vulshok Gauntlets and Fireshrieker. But he was still extremely short on creatures.

In the last round of the draft his luck finally changed - at least a little bit. He wheeled a Stalking Stones and a Welding Jar (which Dirk likes very much). Then he got a very late Neurok Spy, and his deck started to get the look of an affinity-deck. The next pack provided him with some sort of win condition - he got a Broodstar, which can get quite big in his deck. The rest of the draft didn't give him any more good cards but a Frogmite and a Mask of Memory. In the end he got hate-drafted by the player to his right one more time, when Aaron took a Spikeshot Goblin, which would have been so good for Dirks deck.

After the draft Dirk described his deck as a big pile of junk. When asked about his chances the self-confident player from Berlin smiled again: "I am going to win, of course!"