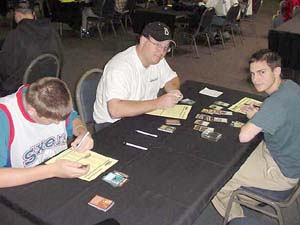 This is the classic battle that plays itself out over and over at Grand Prix all over the world: bunch of guys that believe they have game show up at the event and beat people left and right, and as they climb the standings, they run into better and better teams. At the top they meet a professional juggernaut team made of top-tier players that have been down this road countless times before, and are not willing to lose to guys they've never seen before. Sometimes the new blood pulls the upset, but more often the Pros show them who's boss.

Playing the role of David is the undefeated trio of Prodigy (Duguid, Gindy, and Orellana). In the Goliath role are the Ubermenschen (Ho, Rubin, and Kibler). The format is three-on-three Onslaught block team Rochester.

Rubin opened first and took a Dive Bomber, showing a willingness to put white in the middle. Ho took Lavamancer's Skill second, signaling red-glue early. That meant Kibler, as predicted, would be green.

Prodigy moved into the same color patterns. Duguid took Wall of Mulch in seat A, Gindy took Swat in B, and Orellana took Mistform Wall in C. Looked to be mirror matches all around.

And for the most part it was. Orellana got a Skill of his own plus a Slice and Dice for his blue-red deck, and the best card Ho got from Onslaught (after the Skill) was an Ascending Aven. Kibler had grabbed a bunch of black cards early including a Dirge of Dread, and wanted to take an Anurid Murkdiver in pack four. Rubin insisted he let the Murkdiver go, indicating that Duguid was not black, and Kibler gave in and took Screeching Buzzard.

Duguid was in fact not drafting black at that point, but couldn't pass up the wrecking ball Murkdiver. Now Kibler had reason to worry. From that point on, Kibler drafted almost green exclusively, but snared a late Wave of Indifference.

Kibler stuck with green in Legions and took no black cards early there, letting Rubin have both Skinthinners.

The red-blue match was getting interesting. Orellana grabbed two Skirk Marauders, a Mistform Seaswift, a Goblin Goon, a Crested Craghorn, and a Wall of Deceit. Ho had two Marauders of his own, and nabbed several more blue flyers.

Rubin got a Corpse Harvester to go with his Skinthinners, and his opponent Gindy started going the Soldier route with two Daru Stingers and two Deftblade Elites.

In pack one of Scourge, Ho had to let a Rush of Knowledge go to the other team; he selected Pemmin's Aura over it instead. There was a Rush for Ho in the next pack though, but by taking it he had to pass Forgotten Ancient to Duguid (much to Kibler's dismay). Prodigy later returned the favor by not hate-drafting a Krosan Warchief that looked like it would make Kibler's deck complete. The scales tipped back slightly in the favor of Prodigy when the Ubermenschen "forgot" to hate a Dragon Shadow that ended up in Duguid's pile.

As they sat down to build decks, Kibler said that he thought Rubin led them astray on a few picks and that they were going to have their work cut out for them. Ho believes that his matchup is a lost cause, as "every card in his [Orellana's] deck is insane," and that maybe the correct play was to hate the Forgotten Ancient just to increase Kibler's chances of winning.

Rubin was his normal ornery self, and expected nothing less than easy victories from his deck and his mates'—the picture of confidence.

Prodigy was feeling just about the same way. They expected Ho to lose the red-blue match, Rubin to give Gindy trouble, and Duguid to bask Kibler. Of course, their predictions were based on the incorrect assumption that Kibler was still playing black when he was playing green with three red cards, so the Murkdiver will just be an overcosted 4/3 in Duguid's deck.

I predict a loss for Ho, a win for Rubin, and a win for Kibler unless he has to face Forgotten Ancient early in more than one game.

1 Rush of Knowledge 1 Slice and Dice