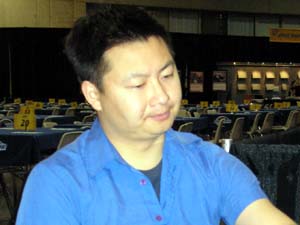 Ben Seck, his continent's best player, made the Top 8 of last year's booster draft PT. The year since was not particularly kind to him, and he had to qualify for this event via a PTQ. He spent the previous two days at E3 hanging out with the participants in the Magic Invitational discussing strategy and seems quite well prepared for another run at the top.

Before the draft began, Seck said that his preferences in the format were to avoid white and green almost exclusively, and try to draft cards that cost less than five mana. Black is his favorite color by far, and he ran his first table with a blue-black deck. He gave much of his credit in draft 1 to where he was sitting--fourth in a row of established pros.

At this table, Seck was also fourth in a row of pros. Norway's Rickard Osterberg and Americans Alex Shvartsman and Gerard Fabiano were feeding him. Behind Seck were Ian Spaulding (USA), Kentaro Yamamoto (JPN), Alexandre Riviere (FRA), and Kazuya Hirabayashi (JPN), with the latter passing to Osterberg.

In pack one, Seck was greeted with the choice between Icy Manipulator, Deconstruct, Somber Hoverguard, and Vulshok Battlegear. That's no choice, really; he slid the Icy face down onto the table. Meanwhile, to his right, Gerard had a similarly saucy dilemma: Icy, Shatter, Arrest, Domineer, and the bomb-tastic Molder Slug. Opinions are split as to which of Slug or Icy is right there, but Gerard took the big green man.

Seck took the second Icy, but he was unsure if it was correct. Two Icys are nice, but they sure don't contribute to a fast deck. Electrostatic Bolt came third, and Seck took it even though he had just passed Shatter. (Gerard had taken Triskelion out of that pack, Shvartsman took a common of some sort.) With his fourth pick, Seck took Granite Shard over Blinding Beam. Even though he could have gone into white there, and Beam is a fine card to do so with, his bias against the color pushed him to the Shard.

He kept his second color option open with the next few picks--Pewter Golem, Neurok Spy, Woebearer--but when he got Reiver Demon eighth, he knew he was one of only a small number of black drafters.

Going back the other way, Shrapnel Blast was the only choice from the pack he opened. He took another Bolt second, and a red-black Talisman out of a very shallow third pack. His fourth pack contained Promise of Power, and Iron Myr. His aggressive side really wanted the Myr, but his rational side picked the Promise. He got an off-color Myr next, and then not much good for the rest of Mirrodin.

The Darksteel pack he opened was phenomenal: Sword of Fire and Ice, Juggernaut, Barbed Lightning, Echoing Decay, and Leonin Bola. He took the Sword, later saying that although it might not have been the best card for his deck, there was no way he could beat it. He got Echoing Decay second, and then made quite a weird pick.

His third pack had only one really good card for him--Essence Drain. Ben looked to the ceiling and mentally reviewed his already long list of five-mana cards, and then drafted… Spincrusher. Yes, the 0/2. He later defended it saying, "My late game cards are so powerful, I just need anything that can block. It is a 2-drop that blocks just about every other 2-drop in the format." I asked him what percentage of Magic players he thought would have made that pick, and he said, "None. I'm sure I'll hear about it, and I'm not even sure it was right."

Chittering Rats came fourth, and then he picked up some modular creatures (a Worker, a Stinger, and a Fiend, the last two both selected over Bruisers). An 11th pick Darksteel Ingot rounded out his playables.

Seck's deck is full of power. To get there, he has three nonland mana sources and a Spellbomb, plus as many good blockers as he could fit (Wall of Blood, Spincrusher, Yotian Soldier). His decision to play only 16 lands seems a little greedy, but he's drafted plenty and knows how to build decks.

He predicts a 2-1 for sure, with his eye on 3-0 as long as no other deck gets a really fast draw and runs him over. From what I saw at the rest of the table, that probably won't happen. Shvartsman's and Osterberg's decks were both bad, and Gerard's, while solid, was not particularly fast.